We tend to think of artists as people with sorts of egos that make them want to stay in the spotlight, to get attention. An exhibition of three important L.A. artists focuses, instead, on their various of methods of making themselves disappear. Aptly titled, Disappearing—California c. 1970 at the Modern Art Museum in Fort Worth, this show is the first to look in detail at the conceptually-based art of Chris Burden, Jack Goldstein and Bas Jan Ader.

All of the artists are considered major figures in the art of their time and though they all lived in L.A. when it was a hot-house of great talents, they weren’t particularly close friends. In a way, that makes their sui generis obsessions more fascinating and undeniably connected to who they were as people.

Most of the art is based in an action, as opposed to performance, though all of them made certain that it was photographed, filmed or video-taped. In short, they knew they were making art and expected it to have a life beyond the action itself. This was part of a larger movement of performance-based art in the 1970s and what was called the “de-materialization of art,” a way to move away from the production line of saleable paintings and sculptures. Made in the shadow of the Summer of Love, in the waning years of the Vietnam War, the show has something of a somber tone. 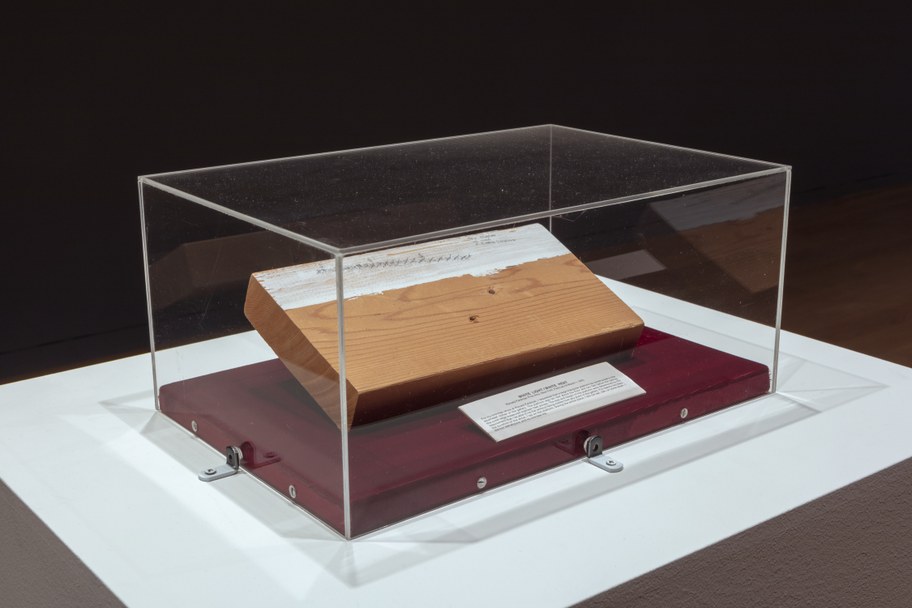 The best known of the three is the American artist Chris Burden, who had spent much time on the East Coast and in Europe before attending Pomona College and then U.C. Irvine, both of which were crucibles of permissivity for new art. His now notorious graduate piece was hiding in a school locker for five days and nights with nothing but water and bottle for his urine.

People could talk to him while he was in the locker but he could not be seen or heard. He had hidden himself away at the very time that most art students were preparing to make themselves known.

That daring piece ultimately contributed to making him one of the best known artists and the exhibition includes photographs of later manifestations of his extreme art. This includes the time that his art White Heat, White Light, (1975) consisted of the apparently empty Ronald Feldman gallery in New York where he lay on a white shelf near the ceiling where no one could see or hear him for weeks. His presence, felt by them or not, was the show. 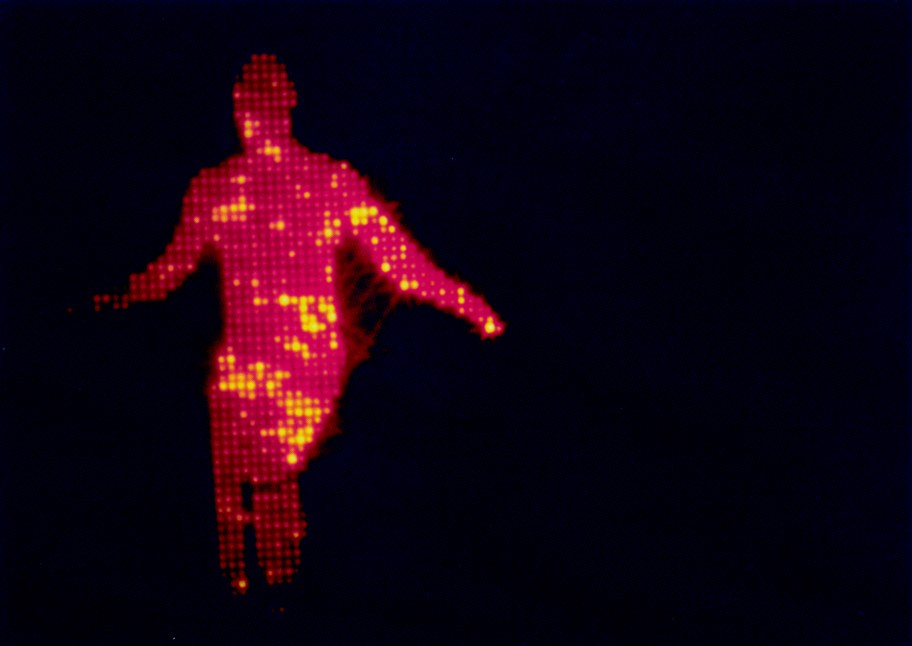 Canadian Jack Goldstein was a charismatic figure in the early years of Cal Arts gaining attention for his 1972 Burial Piece, where he had himself interred in a coffin with breathing holes while teachers and students observed. Other art had a more marked connection to popular culture, especially his short movies. One gallery features a number of projectors running his simple black and white films notably one in which the artist runs around his darkened studio attempting to evade a big spot light, disappearing from unwanted attention. 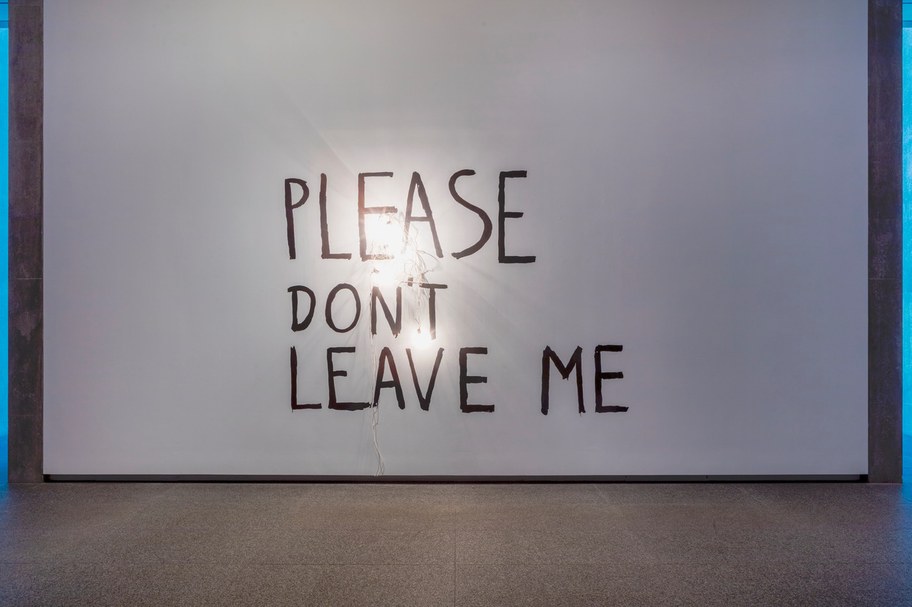 Dutch artist Bas Jan Ader was either the most reckless or the most committed to his art. His is the first work in the show, a 1969 wall text that says “Please Don’t Leave Me,” with a string of electric lights tumbling over it. Black and white films of his stunts can seem both slapstick and dangerous, like rolling off the roof of his house or riding his bicycle along a Dutch canal and tumbling into the water. In some ways, his work is the most moving since it includes evidence of what he called “The search for the miraculous.” Photographs document him with his wife, Mary Sue Anderson Ader, preparing for his solo 1975 voyage across the Atlantic from Chatham, Massachusetts to England in a used sailboat. His body was never recovered and the boat was discovered a year later off the coast of Ireland. He just…disappeared. 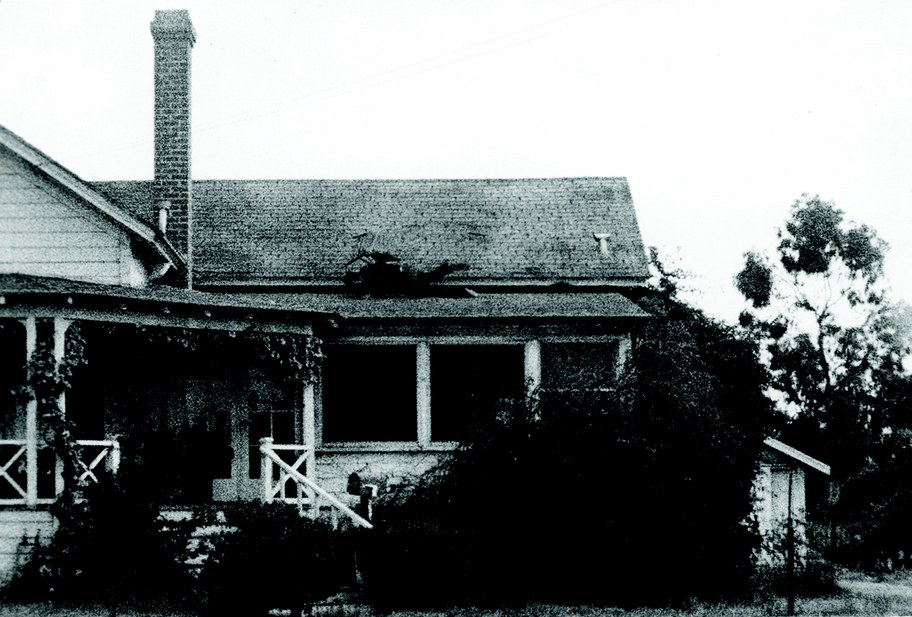 Was Ader naive? Did he have a death wish? He was the most extreme but all of the artists were exploring the effects of extreme actions on themselves first and foremost. All the documentation and relics can make the actions seem like theater or magic. Burden has long claimed that his most extreme act, of having himself shot, was a misfire. He wanted to know the fear of being shot at, not the pain of being hit. Perhaps Ader wanted to know the feeling of being lost at sea, the feeling of praying for and receiving a miracle. But his project, too, went tragically off course.

Goldstein wound up being a super star in the New York art scene for his 1980s paintings of nocturnal cities illuminated by exploding bombs of white light. Yet, he died an impoverished addict in 2003. His saga was compellingly told in Richard Hertz’s book Jack Goldstein and the CalArts Mafia.

Burden produced the most work including the always pleasing grove of vintage street lamps in front of LACMA. He died of cancer at his home in Topanga just four years ago. This show connects his early extreme actions to his lifelong curiosity about the extreme effects of change in industrialization or military research, topics on which he had informed and off-beat opinions.

Organized by Philipp Kaiser, the exhibition captures a time when disappearance was an edgy new concept. It also serves as an elegy for three extraordinary artists who live on through their art. It is on view in Fort Worth through August 11.

If you can’t make it to Texas, a show of work by Ader, Water’s Edge, is at Meliksetian Briggs gallery in the mid- Wilshire area through July 27.