Peter Krasnow (1886-1979) was a well-regarded and well-known abstract artist in mid-20th century Los Angeles. His work was in museum shows, reviewed by critics and purchased by collectors. Today, however, the response might be "Peter who?"

Like so many LA modern artists, his reputation has faded over time but not deservedly. Curator Michael Duncan, who has organized exhibitions of similarly neglected West Coast artists, has come to the rescue at the Laguna Art Museum with Peter Krasnow: Maverick Modernist. It is on view through September 25.

Born in 1886 in the Ukraine, the artist's Jewish parents sent him to Boston in 1907 where his name was changed by immigration officers from Reisberg to Krasnow. Looking for work, Krasnow went to Chicago where he was impressed by the collections of modern art at the Art Institute. He took night classes there before moving to New York City in 1917. In 1920, he married his wife Rose and two years later they moved to Los Angeles. Here he quickly made friends with fellow modernists like his neighbor in Tropico, now Glendale, photographer Edward Weston. 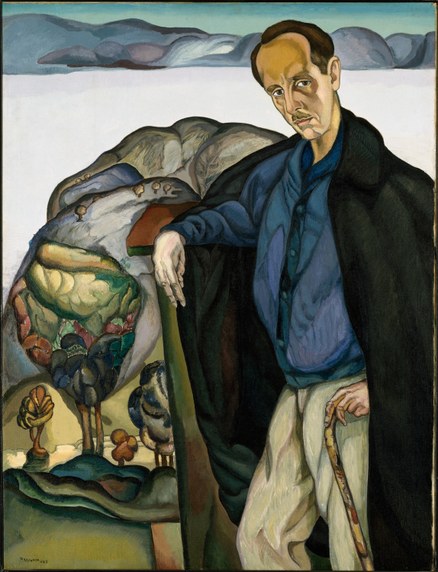 The exhibition opens with an introductory selection of competent paintings and sculptures including an incisive portrait of Weston standing before an extremely stylized background of boulders and trees.

Despite modest success in LA, from 1931 to 1934, the Krasnows moved to France. He radically altered his style after the return to L.A. He began substantial, organically hewn wooden sculptures that gained attention for their power and scale. 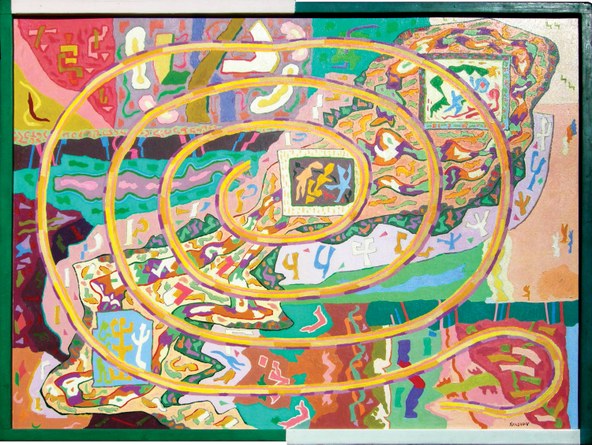 Then, in the 1940's, Krasnow began the paintings that established him as a uniquely LA brand of modern painter. He made works of complex patterns in unconventional combinations of pastels: salmon, chartreuse, turquoise, lilac. Krasnow retained that palette as his most exciting paintings evolved after 1949. Stitched together like tapestries with elaborate symbolic forms, these paintings are truly individual expression. Many are based on calligraphy, letters from Hebrew, Greek or Latin. They leap off the wall with an intensity that remains undiminished over the years. 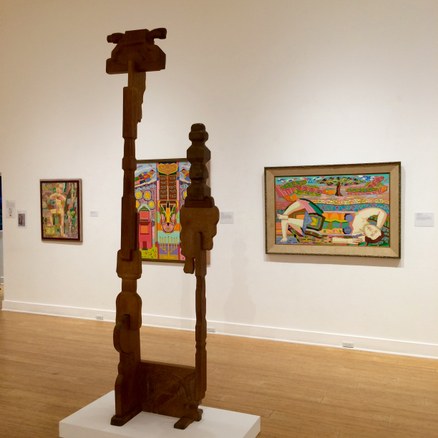 In the main gallery, which includes thirty years evolution of such work, there stand big, carved wood sculptures from a similar time frame. Though quite handsome in their way, for me they don't radiate with the originality of his mature paintings. 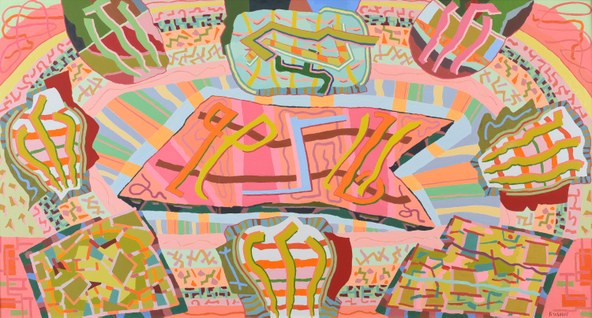 Though never a devout Jew, Krasnow looked to his heritage for extensive symbolism drawn from Judaism, including Hebrew letters and allegorical stories especially in work from the 1960's. His elaborate garden of cacti and succulents tended since the 1920's inspired later paintings with patterns and colors intensified to the point of being psychedelic. In 1969, when he was making such works, he was 82 years old. Fellow artist Lorser Feitelson called him, "the youngest old artist in Los Angeles and the oldest young artist. Because his art doesn't date. It's ever present." 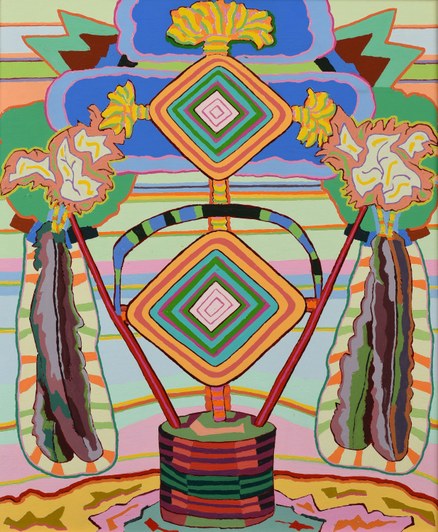 After this show, any question of "Peter who?" has a satisfying and overdue answer.

By the way, at 7pm tonight at Book Soup, I'm discussing Eve Babitz's classic book Slow Days, Fast Company with Matthew Specktor, Howard Rodman and Zoe Crosher, an artist committed to seeing Babitz's out-of-print books get reissued. The New York Review of Books has done the honors and I promise it will reward anyone unfamiliar with Babitz, a truly original LA writer and muse for my own book on LA in the 60's, Rebels in Paradise.