If you had come from Lubbock, Texas to Los Angeles in 1962, as did artist Terry Allen, you’d come to believe that anything was possible. You could be an artist, or a songwriter or a musician. Allen became all of the above.

You can see it all in a survey of his art at a galllery in Venice. The Exact Moment it Happens in the West: Stories, Pictures and Songs from the 1960s to Now.

Most of the drawings on view have not been shown before and they clarify the purpose of his serpentine art with its various detours and road blocks.

Allen, now 76, calls Lubbock a place “so flat that if you look in any direction really hard on a clear day you can see the back of your own head.” Son of a major league baseball player and a piano player, he married his high school sweetheart Jo Harvey and drove west. Like so many of the major artists to emerge in L.A. in the 1960s, he studied at Chouinard Art Institute, now Cal Arts. From the outset, his art had an animated, even goofy aspect that belied its biting content.

He was encouraged by slightly older artists like Ed Ruscha and Billy Al Bengston who had similar Western backgrounds and who had attended Chouinard, as well. Allen was already writing songs and he performed his own country-style Redbird on a 1965 episode of the TV show Shindig. His solution was to consider his songs and his visual art parallel but equally considered pursuits. 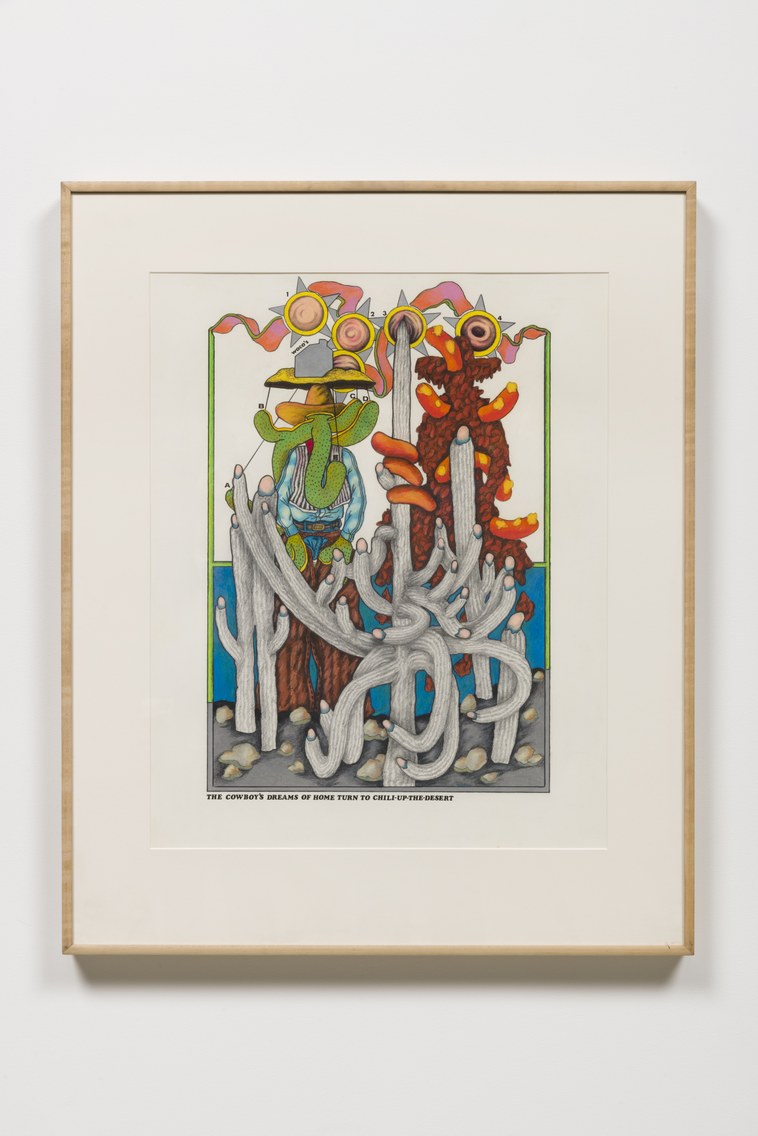 For his 1968 series Cowboy and the Stranger, he attached a packaged reel to reel recording of a song to the back of each framed drawing. He called them “paper listening movies.”

By then, his wife Jo Harvey Allen was a part of the dynamic, performing works with him or on her own. They had their own radio show on KPPC, a broadcast that took place in the basement of the Pasadena Presbiterian Church, where she was the first female country and western dj.

Most of Allen’s art has a narrative underpinning: tales of love, loss, violence and just plain weirdness. For example, an installation of a video monitor shows Jo Harvey’s first performance as part of a wrestling match inspired by Terry’s father who promoted small time wrestling gigs, along with running a nightclub where he booked rock acts traveling through Lubbock. (When I ran into Terry at the gallery yesterday, he told me that his father was such good friends with the flamboyant wrestler Gorgeous George that every Thanksiving, the famous blond would send him a turkey stuffed with a packet of gold- plated bobby pins from his ranch north of San Bernadino.) The point is that Allen’s appreciation for the off beat is genuine. It is not a speculation about some lost part of American culture. It is the culture he got to live.

Allen’s 1975 concept record Juarez is a complex narrative about two couples and a border town told in songs and in drawings. 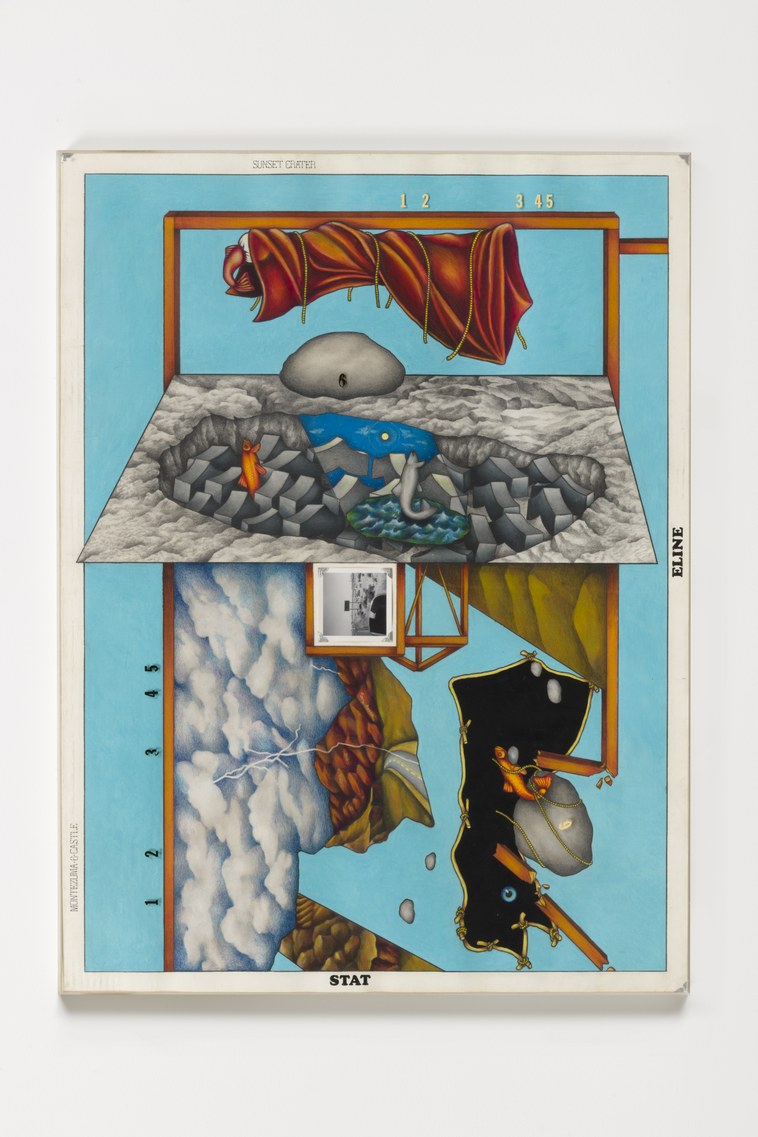 Juarez is a piece very much of our times but Allen’s politics are always rooted in the personal. 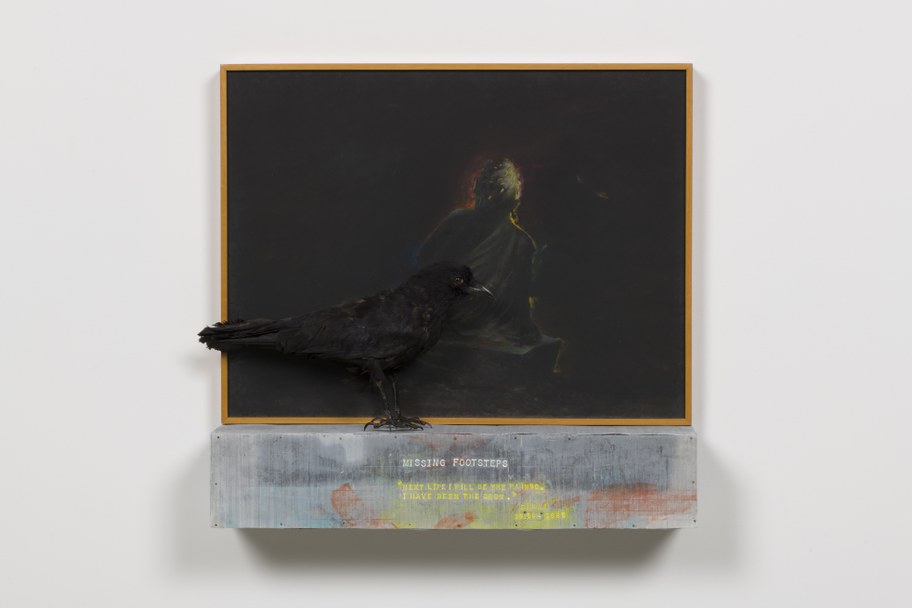 The Vietnam War affected so many of his family and friends that he spent a decade on the project Youth in Asia, which not only sounds like the word euthansia but encompasses the death toll on Allen’s generation. He wrote his texts in type fonts on sheets of lead, a material but malleable and deadly. Some of the drawings have objects and talismans attached to them, smaller versions of the installations that he was evolving.

Theater had been an influence since Terry and Jo Harvey saw the experimental Living Theater perform Frankenstein in the 1960s. The writings of Antonin Artaud not only affected their thinking about theater’s potential, it inspired Allen’s major installation, Ghost Ship (2010), which is not in the Venice location but can be seen by appointment at L.A. Louver’s warehouse location on Jefferson Blvd. 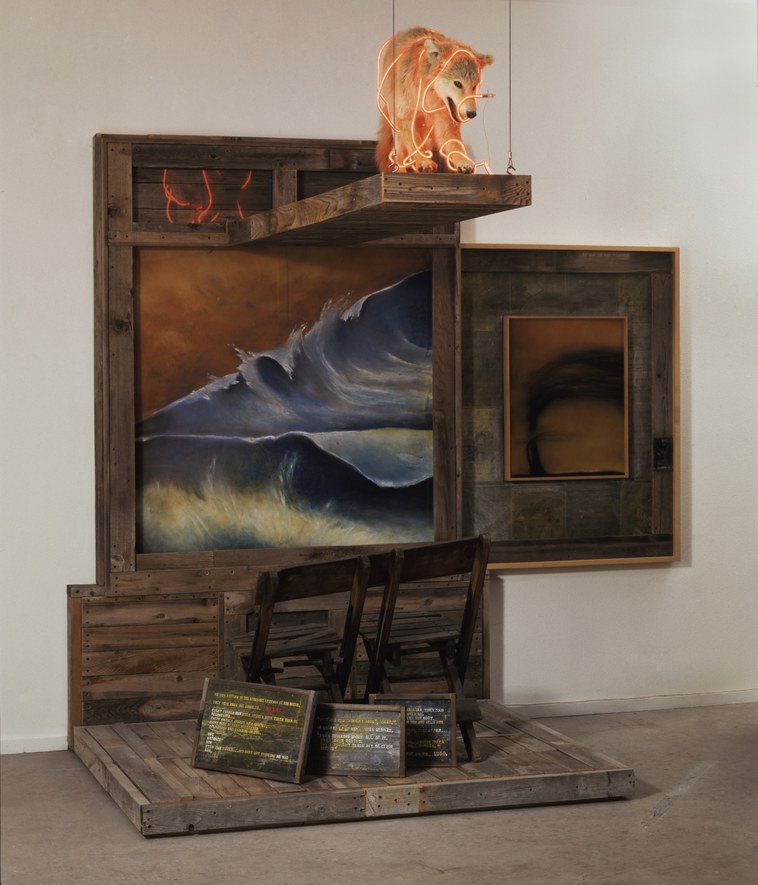 Incomprehensibly, there has never been a museum retrospective devoted to the work of Terry Allen. While this show is not a substitute, it is a wonderful opportunity to immerse yourself in the alternative universe of his thinking and creating.

Allen has had a long career recording and playing music with his Panhandle Mystery Band with his son Bukka Allen and they will be playing at Zebulon on July 18 and 19. Also, Terry and Jo Harvey Allen will be interviewed by Aram Moshayedi at the Hammer on August 7.

On another note, some galleries are starting to observe summer hours. L.A. Louver, a block from Venice Beach, is not open on Saturdays but otherwise, Tuesday to Friday. The show is continues through September 28.