OK, my friends. The subject of today’s Art Talk is the provocative and explicit art of British artist Sarah Lucas, currently on display at Hammer Museum. The tongue-in- cheek title of the exhibition, Au Naturel, is a French phrase meaning “in the nude.” And nudity – plenty of nudity – fills the many museum galleries in the form of sculptures, photographs, videos, and installations. 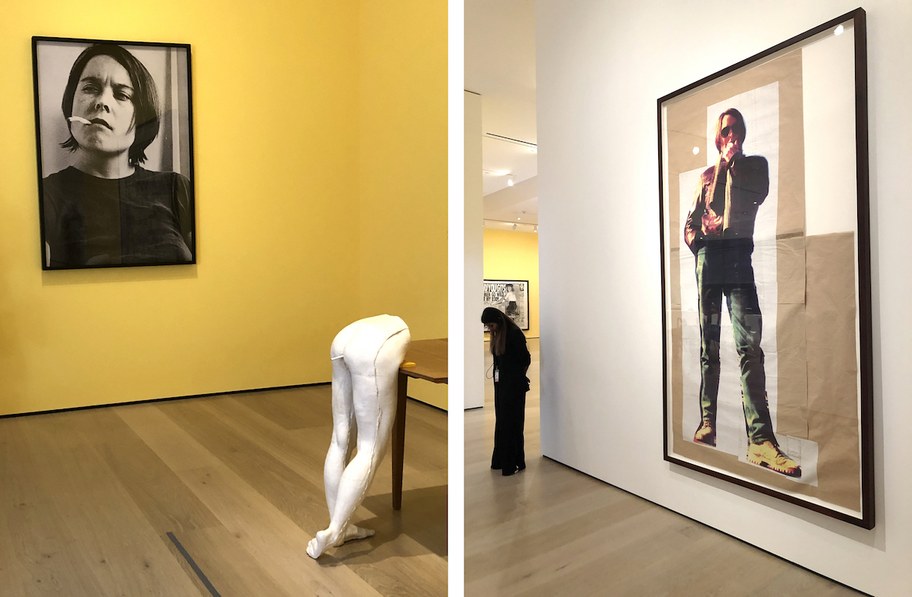 Born in 1962, Sarah Lucas received recognition as a member of the Young British Artists (YBA), a group of artists who gained notoriety in the 1980s for breaking norms of propriety. Now, three decades later, Sarah Lucas has distinguished herself as one of the most influential British artists. In numerous photographic portraits of the artist, we see her exuding self-confidence and plenty of attitude. Yes, she is a badass. The cigarette sticking out her mouth in one photo echoes other cigarettes sticking out of orifices in plaster sculptures of a woman’s body from the waist down. 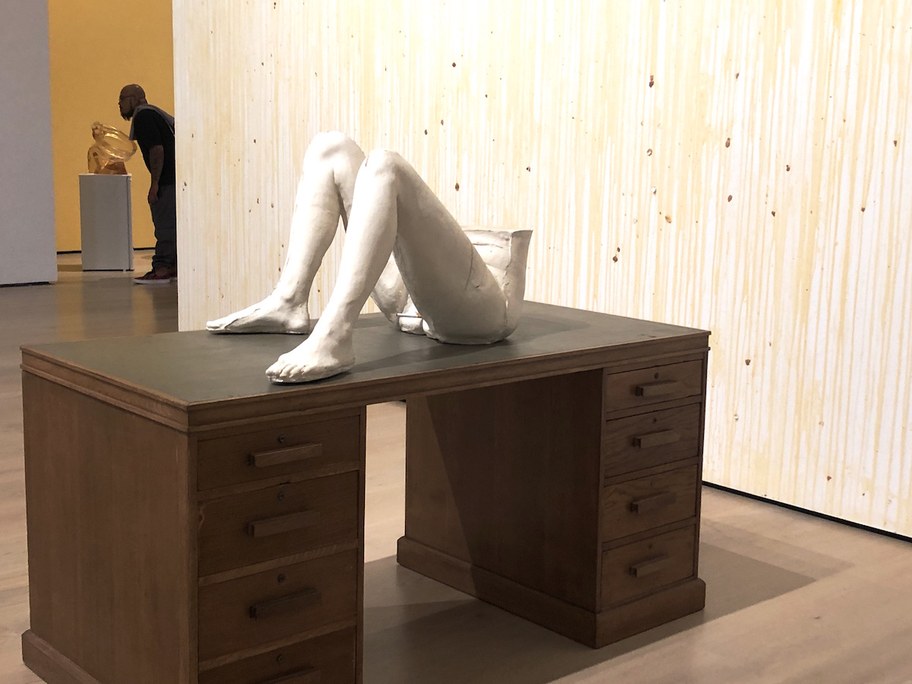 I know her work is a little bit shocking, but the artist presents these plaster female naked bodies with a touch of absurdity, humor, and critique: leaning over tables or sitting on top of desks with legs spread. It’s up to us to make sense of what’s going on. Behind one of her naked plaster sculptures is the remnants of a performance during which women threw 1000 eggs against a wall, alluding to women’s rights to control their own bodies. 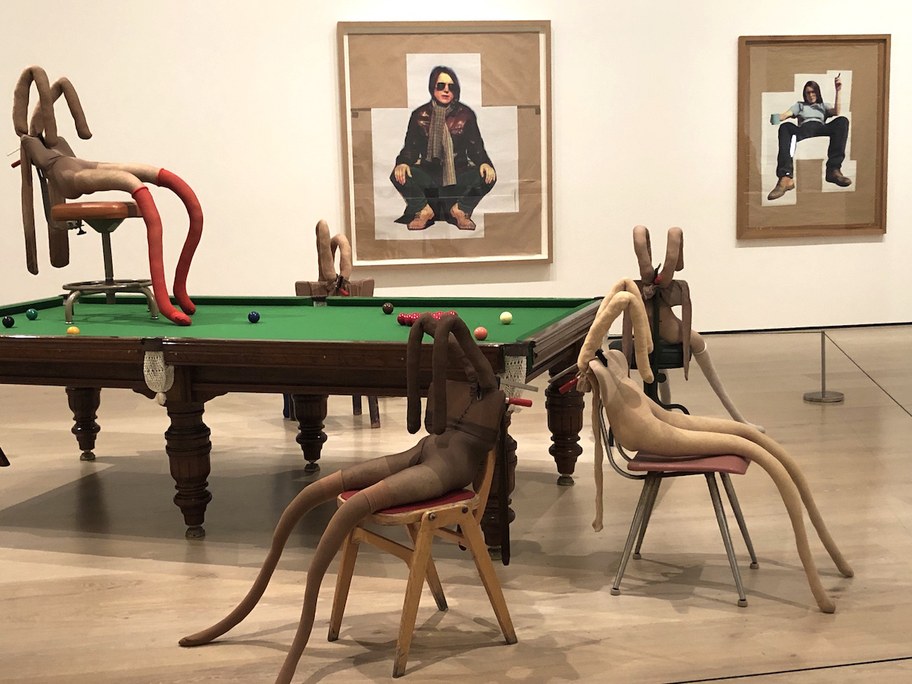 For thousands of years, the female body and sexual desire were the object of the male gaze in art – but, Sarah Lucas presents the female body with a sense of parody and drama. Don’t feel guilty if you giggle a little bit, looking at her “Bunny” sculptures made from stuffed nylon stockings. These life-size anthropomorphic forms are congregated around and on top of a billiard table, a site usually a gathering place for men. 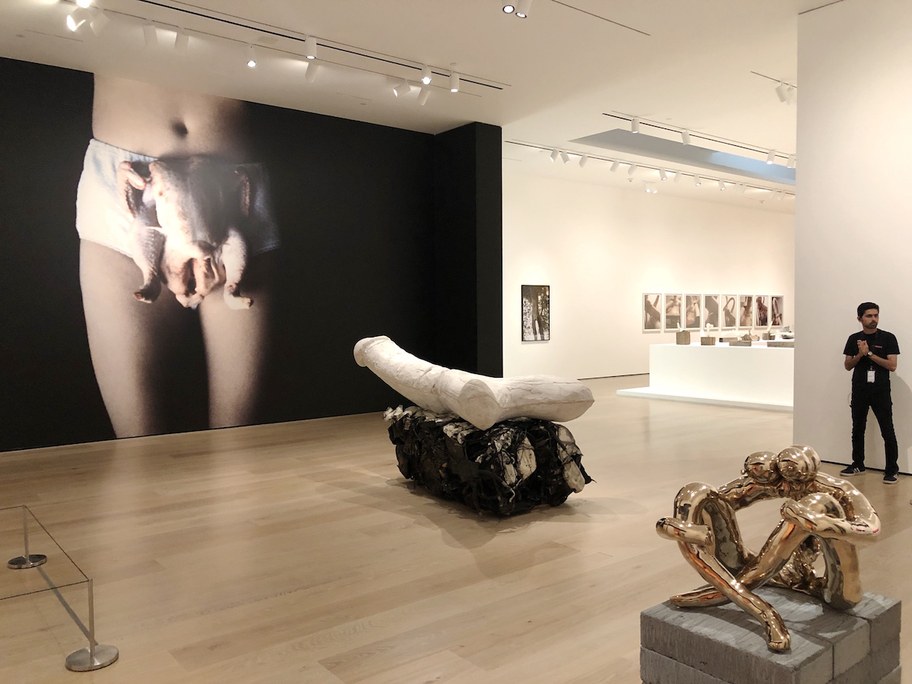 And now, with reluctance, let me try to describe the most provocative presentation of male sexuality and aggression in the show, a sculpture titled Eros. A gigantic white concrete sculpture of a phallus sits atop a crushed car, and the phallus is aimed at a wall- sized photograph of a woman with a raw whole chicken on top of her underwear, suggesting a vaginal opening. The only other female artist I can think of who so fearlessly dealt with such subject matter was Louise Bourgeois. These ladies and their art have balls… 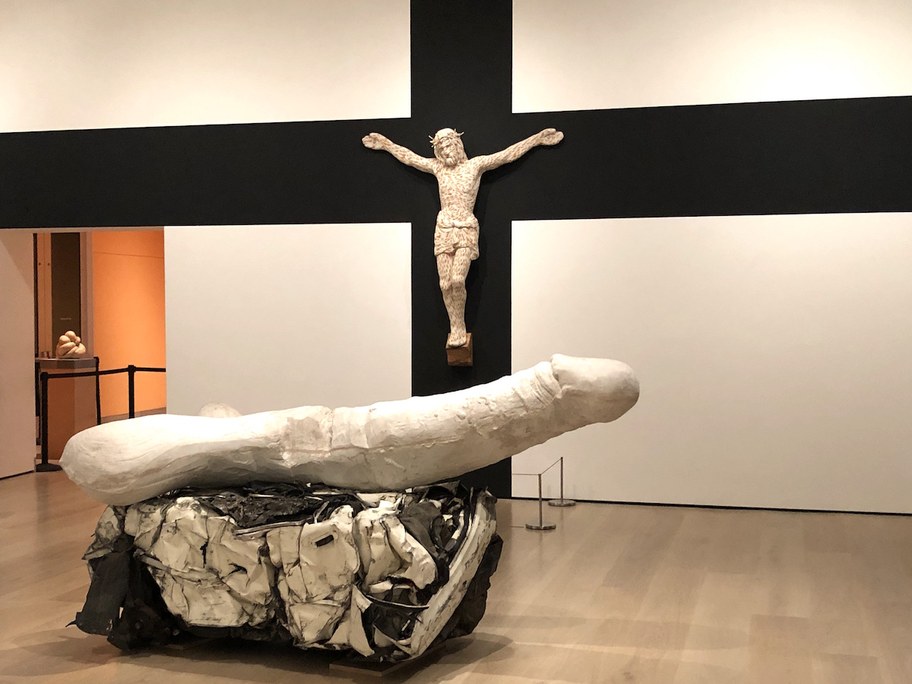 Sorry, my friends, but there is no way for me to talk about the life-size sculpture of a crucified Jesus covered with hundreds of cigarettes without again talking about the phallic Eros sculpture in front of it. Without exception, images of the crucifixion present Jesus with cloth modestly draped over his waist. But this installation that juxtaposes “cigarette Christ” and a massive phallus makes you think that church and religion are not perfect, but like us human beings, are full of imperfection. 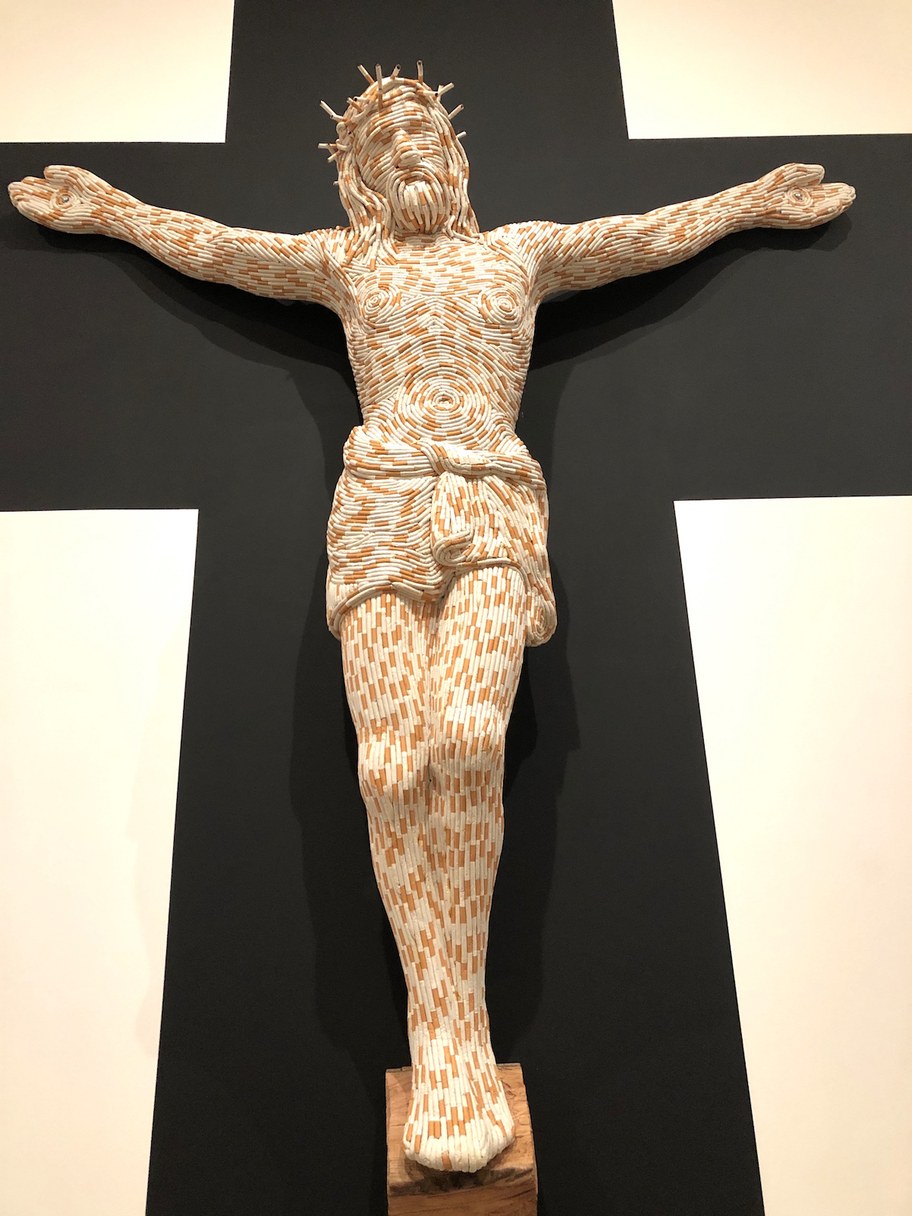 This must-see exhibition runs through September 1 – and, make sure you go to see it without your in-laws or children by your side.