The long-awaited final environmental impact report for LACMA’s redesign of the Miracle Mile campus has been published -- and it raises questions about whether the proposed project has been iterated to a point that it has lost its impact.

The Pritzker Prize-winning architect Peter Zumthor is the designer of the ambitious $650 million upgrade.

His scheme proposes replacing four buildings -- three by architect William Pereira and one by Hardy Holzman Pfeiffer -- on the LACMA campus with a monolithic structure that crosses Wilshire Boulevard.

The final EIR reveals a watered-down version of recent plans that has also been shrunk in height and size.

It will be more than 45,000 square feet smaller than the four existing LACMA buildings and the theater size will drop from 716 seats to approximately 300 seats. The updated design also calls for the removal of the “chapel galleries” atop the building, reducing the height of the building to 60 feet tall, instead of 85 feet as previously proposed. 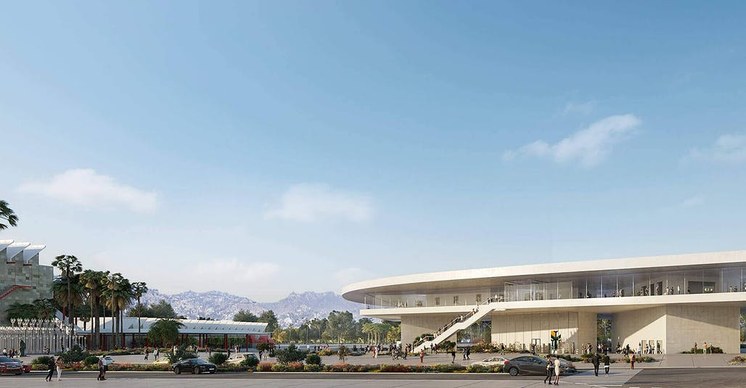 This project has gone through a number of changes. Has it been diluted too far?

The project was first announced back in 2013. Zumthor’s original scheme was for a dark gray concrete, amoeba-shaped building, described variously as a pancake or a blob or an inkblot.

This structure would contain a one-story gallery floor with exterior walls of glass, floating on columns over LACMA’s current site.

The idea was that the building and landscaping would be integrated. Paths and native and drought-tolerant vegetation and outdoor sculptures would flow under the elevated building, enhancing the outdoor experience for museum visitors and guests.

This was a lovely concept in principle except it aroused concerns about how it would feel walking under the concrete underside of the galleries.

The design concept roiled the design and architecture community in Los Angeles.

Some saw it as a bold gesture by a master of serene minimalism; others saw it as ill-fitting for its urban setting and retro in its form and allusion to drive-by object architecture.

Still others saw the design, which claims to be sustainable, as missing glaring opportunities like making the roof into a public garden or deploying advanced green technologies.

The proposed building also troubled the Natural History Museum -- owner of the tar pits, and the curator of its George C. Page Museum -- for different reasons: it would be too close to the tar pits — literally overshadowing them. Ironically, the tar pits were the inspiration for the jet black building.

The plans were reined in, and the dark gray concrete was changed to a lighter sandy color, referred to as “a mineral tone.” Most controversially, the building was extended across Wilshire Blvd to what is currently the Spaulding parking lot.

But this move also had its defenders. Some called it a bold architectural and urbanistic statement for crossing over Wilshire while critics saw it as a crude interruption of the flow of LA’s primary boulevard. Others felt the punch of the black blob had been lost in translation. Some simply felt neither scheme was promising.

Now we are seeing further compromises, such as the removal of the “chapel galleries” atop the building to bring down the building’s height.

One of Zumthor’s strengths is his control of light and these chapel galleries were a centerpiece of a presentation he gave a couple years back in which he showed how art and sculpture would sit in monastic calm, suffused in natural light from the chapel skylights.

What’s worrying is that this scheme — strange in its first incarnation but at least bold — is being killed by a thousand cuts, to the point where some wonder why the museum is pushing so hard to build it. 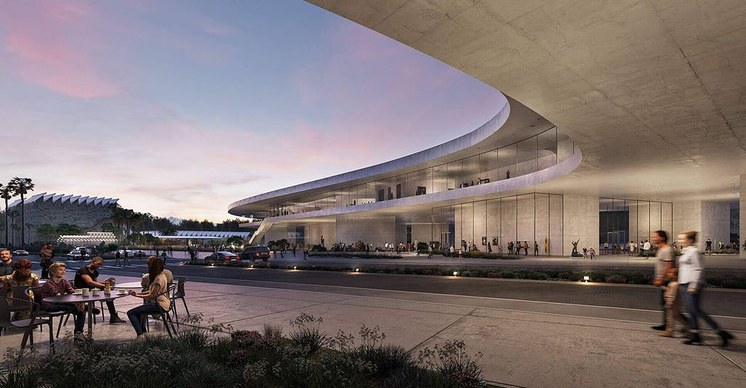 What happens next for LACMA?

According to Deborah Vankin, arts reporter at the LA Times, the greenlighting of the final EIR means the museum can launch the public phase of their fundraising.

The more modest designs would also speed up construction, from 68 months to 51 months.

A LACMA spokesperson tells DnA that demolition and construction will begin in late 2019 and is expected to be completed in the end of 2023.

There’s a lot of museum building going on.

Just west of LACMA at Wilshire and Fairfax Avenue, the Academy of Motion Picture Arts and Sciences continues construction on its Renzo Piano-designed building in the shape of a glass-and-concrete sphere.

At Exposition Park, the Lucas Museum of Narrative Art is in the midst of construction of a spaceship-like structure designed by Beijing-based MAD Architects.

And The Orange County Museum of Art is moving from Newport Beach to Costa Mesa, into a space twice its previous size designed by another Pritzker Prize-winning architect, Thom Mayne, and his firm Morphosis.

All these institutions are fundraising, putting pressure on philanthropic dollars.