It’s art that tends to get looked down at by the fine art world. Here’s how Lucas himself explained it at the event this morning.

"I believe in all kinds of art. And I believe all kinds of art have a right to exist. And I think it's important to have a museum that, I used to jokingly say, supports all the orphaned arts that nobody else wants to see -- but everybody loves," Lucas said.

Everybody may love this art, but it took the museum a while to find a home.

Lucas and his wife Mellody Hobson have privately funded the museum with a gift of over $1 billion.

It was previously going to be housed in San Francisco and then Chicago, but both proposals collapsed after strong community opposition.

In fact, Mayor Eric Garcetti joked about how he called Lucas to ask what were LA’s chances of wooing the museum -- and Lucas told him 95 percent chance no. Garcetti said that’s all we need, 5 percent.

The museums's "organic architecture" will be surrounded by 11 acres of new park and garden space on the roof and on the ground underneath the floating structure. Image courtesy of Lucas Museum of Narrative Art.

Local officials are touting the hundreds of jobs that’ll be created, and the opportunity for school kids to come see this art. But it’s also bringing a very cool design.

Chinese architect Ma Yansong, of MAD Architects based in Beijing, designed the 300,000 square foot building. It involves a very long, sleek spaceship-like design that’s five stories and appears to float off the ground. But he calls the design organic and emphasizes the 11 acres of new park and garden space on the roof and on the ground underneath the floating structure.

"So we use very advanced technology for structure for a facade. So we want to make building look like from outer space. But at the same time talk to the natural environment around the site," Yansong said.

L.A.-based landscape architecture firm, Studio-MLA is involved with the design of the gardens which will replace parking lots. There will also be two state-of-the-art movie theaters, restaurants, digital and editing classrooms and a free library.

Construction will be completed in 2021 -- no date has been set for when the museum will open to the public -- but this is all happening as that area is going through a big transition.

The ninth district, or as Councilmember Curren Price likes to call it, the "New Ninth" will be home to not just the Lucas Museum but also the Banc of California Stadium to house the Los Angeles Football Club, the city's new soccer team. This is an area near USC -- George Lucas’ alma mater -- that is going through a revival, and the Lucas Museum is playing a big role in that. 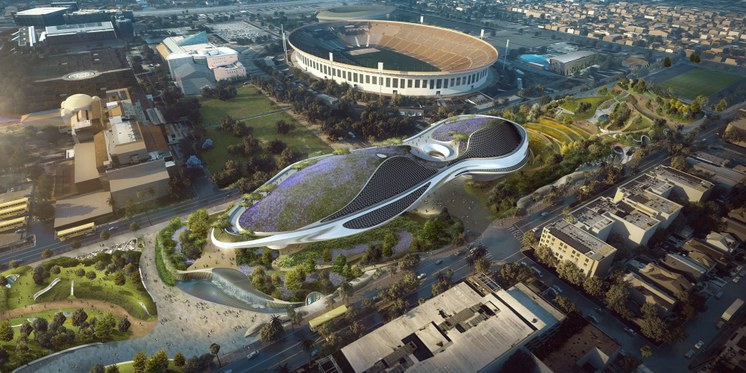 Ma Yansong of MAD Architects designed the new museum, which resembles a silver spaceship and is meant to "talk to the natural environment around the site." Image courtesy of Lucas Museum of Narrative Art.