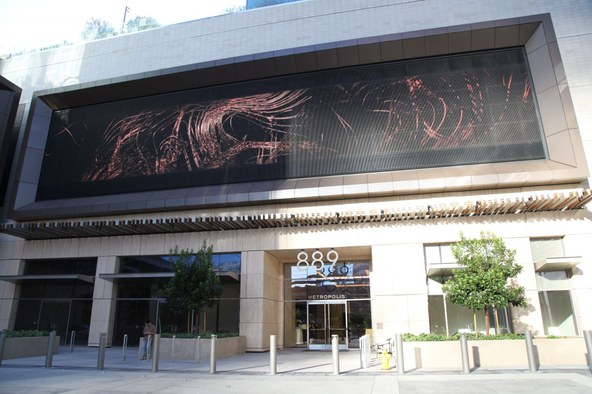 How would you like to live in a fancy high-rise by the 110 freeway?

We have been asking the question “what is home in LA?” -- and we’re looking at all sorts of housing types, from the tent to the gigamansion, and everything in between. We are finding out how people are living their version of the LA dream.

We are looking at how designers and builders are creating it amidst a building boom, and lots of construction challenges.

And we’re asking how our new homes fit into LA’s legacy of housing design.

“We have to densify because urban sprawl is really been a killer for us and enough's enough. So it's time for us to go vertical. It's time for us to do vertical better. That's what we need to do,” said Rob Jernigan, co-managing principal for the Southwest region for the architecture and design firm Gensler.

His firm master-planned and lead the design of Metropolis, with executive architects Harley Ellis Devereaux and interior design by JG Neukomm.

Metropolis is the cluster of glass towers next to the northbound 110 in downtown LA. It was built by Greenland USA, the American arm of a huge development company headquartered in Shanghai. 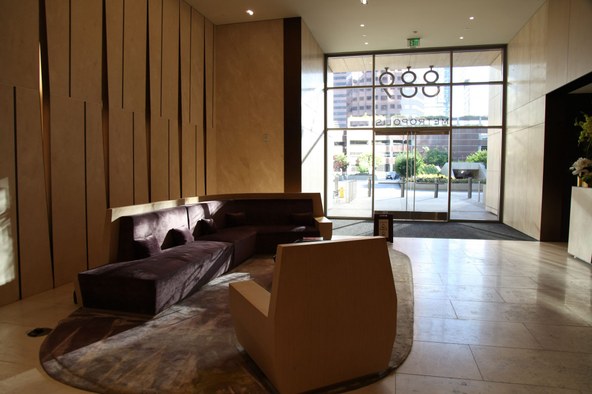 The lobby of Tower I at Metropolis. Photo by Avishay Artsy.

It consists of a hotel and three residential towers over shops and eateries. People are already living in the first tower. The second tower opened with a big party in late July. It featured aerialists, fire dancers and other performers in a spectacle of urban opulence.

Jernigan said that when Greenland saw a parking lot beside the 110 in the South Park area of downtown, they spotted an opportunity that locals had missed.

“I think it's also very interesting that we look to someone not from L.A., someone from overseas to come help us with this vision and how to implement this,” Jernigan said.

The strategy at Metropolis was to take two disadvantages -- a freeway and several stories of above-ground parking -- and make a virtue out of them. They put a terrace on top of the parking. The balconies face east, away from the freeway. “So essentially here we have the heart between the second and the third high rise tower on this elevated park, essentially, which is close to the size of Pershing Square. It's kind of an island elevated above the freeway,” said Gensler design principal Olivier Sommerhalder. 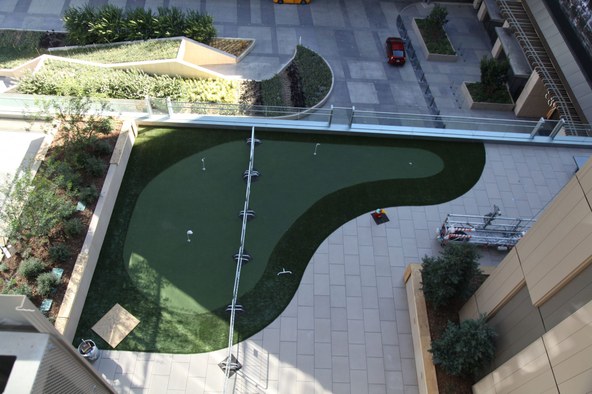 A putting green at Metropolis. The developer added amenities that would attract
buyers seeking a luxury lifestyle in the heart of downtown LA. Photo by Avishay Artsy.

The designers solved another LA urban problem -- all that above-grade parking -- by concealing it behind ground-level stores and eateries and a large public artwork on one side.

“What we wanted to do is take the retail and the residential and laminate it to the front of the parking garage,” Jernigan said.

“Generally in city environments now, you don't want to have a parking exposed anymore towards the street. Now you want to screen the parking as much as you can to really spur activity on the streets and make it lively,” Sommerhalder added.

The Shanghai developers also added some features specifically aimed at Chinese buyers. Anna Yu from the Metropolis sales team pointed out that they eliminated the 13th and 14th floors, as well as the fourth unit of each floor, because of superstitions that the numbers bring bad luck.

But there was also a lifestyle essential that Greenland had to learn from Angelenos. They hadn’t initially thought about putting a dog park on the roof. But the popularity of canine companions among downtown LA dwellers led them to build an astroturf-covered dog park on the terrace of Tower II with little hillocks, tubes and showers. It is next to a children’s playground. 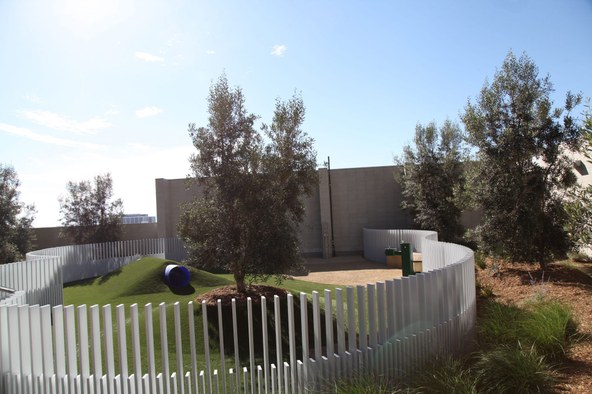 A dog park on the ninth-floor terrace of Tower II at Metropolis.
Photo by Avishay Artsy.

One of the critiques of Metropolis is that it looks like little different from glass office towers. The designers of the building say they took pains to differentiate the residences from office towers, through layering of glass of different tints with opaque panels, through adding in operable windows, and through the introduction of the garden in the sky, which even has orange trees in a nod to LA’s fruit-growing past.

But this new direction for downtown Los Angeles doesn’t appeal to everybody.

“I love towers. I think they're really interesting. They give us new perspectives on cities,” said Ashley Morgan Hastings, a graduate student at SCI-Arc, the Southern California Institute of Architecture. “But at the same time you're disconnected a lot from from the city itself.”

Hastings’ thesis project argued for chopping up residential towers and distributing the housing at lower rise.

“We're not a city with one center. We’re many neighborhoods that are all sort of networked together, and having a vertical downtown sort of defeats the purpose of the city,” she said.

“One of my favorite things about L.A. is its varied architecture. There's so much rich history and differences in aesthetics and formal identities between all the residential and commercial buildings throughout the city. And when we build a tower it's all a curtain wall, it's glass, it's shiny, it's that bluish-silverish metallic, reflective, kind of sad story for a building.”

One of Metropolis’s residents, Anthony Nguyen, was drawn to the tower as a shining alternative to the suburban life.

“I've always wanted to live in downtown since I was younger, mostly just because I wanted a nice view of the city skyline for whatever reason. I really like the aesthetics of being able to see a city skyline, especially at night, so that was a big deal for me,” Nguyen said.

Nguyen is 34, works as an employment lawyer, and he wanted to live close to the Stanley Mosk Courthouse, where he often practices law. He bought a one-bedroom corner unit in Metropolis in February. It's 1,100 square feet and it cost him about a million dollars.

He also owns a home in Westchester, which he rents to tenants. He tried living there but found the suburban lifestyle too limiting. “I think it's a great neighborhood for families and for kids. But I don't have any kids,” he said. “It wasn't really conducive to my preferred type of living. So that's why I'm no longer living there and I rent out the house.” 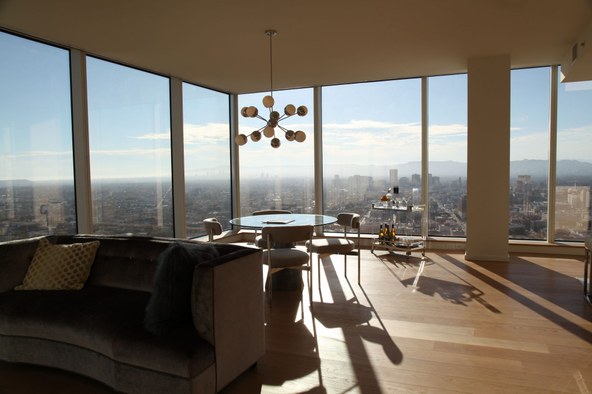 The view from a two-story, three-bedroom penthouse condo on the top floor of
Metropolis’ Tower I in downtown LA. Photo by Avishay Artsy.

DnA finished its tour of Metropolis at the top of Tower I, in a two-story, three-bedroom penthouse condo that is selling for $6 million. They call it a “crown jewel” of the development.

Brigham Yen, a realtor and publisher of the blog DTLA Rising, downplays some expectations that Metropolis condos will be snapped up by Chinese investors looking to park their money in foreign real estate.

“The majority of the money from the Chinese are going to the San Gabriel Valley -- Arcadia, Alhambra, Monterey Park, San Marino -- they're attracted to the suburban lifestyle. And all the amenities are over there as well: the Chinese supermarkets, Chinese restaurants, Chinese everything is in the San Gabriel Valley. It's what they're used to. And coming from a very crowded place like China, they come to the U.S. and they think, ‘wow, I want my own house with property and the yard.’

As for Yen himself, a resident of the financial district in downtown, he would live in Metropolis, if the price were right.