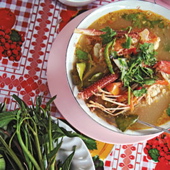 James Oseland is the editor of Saveur magazine – he recently visited the deep south of Thailand and wrote an article about their cuisine.  The foods of Southern Thailand are a heady mix of spicy heat and multicultural influence from neighboring countries, which separates them from the cooking traditions of the north.  He explains how their culinary style developed and shares a few recipes.

A Cool Sip of Summer

Aguas frescas (Spanish for "fresh waters") are a fresh juice drink whose popularity in Mexico, Central America and the Caribbean has finally reached the U.S. Their...

The classic Korean dish, samgyetang (chicken-ginseng soup) is an easy-to-find dish in Koreatown. Lucky for us, the neighborhood is also blessed with the presence of Keumsan...

In his most recent book, The Sushi Economy : Globalization and the Making of a Modern Delicacy, Sasha Issenberg explores the network of industries that collide to bring...

Those who are sensitive to wheat gluten have reason to celebrate -- The Sensitive Baker, a brand new gluten-free/dairy-free/kosher bakery in Culver City -- have opened their...

Jane and Michael Stern are a husband-and-wife team that have traveled the country since the 1970s, seeking out what they call “roadfood.” Since that time they have written...

Nobi Kusuhara is the chef and owner of the upscale sushi restaurant Sushi Sasbune. Good Food producer Thea Chaloner rides along with him at 4 a.m. to get the best of the...

Laura Avery discusses the art of cheese making with the Winchester Dairy, who feature varieties of aged Gouda cheese made with raw cow’s milk, including a jalapeno style, a...

James Oseland is the editor of Saveur magazine – he recently visited the deep south of Thailand and wrote an article about their cuisine. The foods of Southern Thailand...