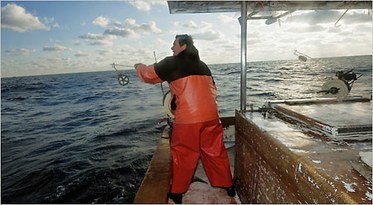 Mark Marhefka is a second generation commercial fisherman, fishing off the shores of South Carolina.  As of January 1, 2010 commercial and recreational fishing for most species of shallow-water grouper, as well as black sea bass, red porgy and red snapper, is closed in North Carolina, South Carolina, eastern Florida and Georgia for four to six months, after which strict catch limits will be imposed.  Because of the ban, Mark has emphasized sustainable fishing and Community Supported Fisheries.  He has introduced chefs to more sustainable fish varieties like triggerfish.

(Photo: David La Spina for The New York Times) Mark Marhefka is a second generation commercial fisherman, fishing off the shores of South Carolina. As of January 1, 2010...

Zane Lamprey is the host of Three Sheets on the Travel Channel.  He's currently on tour and will be appearing at the House of Blues in Anaheim on April 30.

Grover Vineyards Mira Advani Honeycutt is a wine writer and the chairperson of the Los Angeles Mumbai Sister City Coalition. Her most recent book is California's...

Jonathan Gold is the Pulitzer Prize winning food writer for the LA Weekly. This week he reviews The Dining Room at the Langham Hotel in Pasadena. The restaurant, helmed by...

Laura Wright is a Senior at On Earth , an environmental magazine. She recently wrote about food waste in the U.S. According to the USDA, Americans waste 30 percent of all...