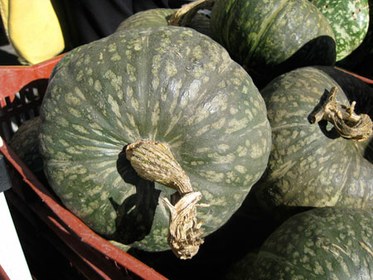 This fall, Evan Kleiman is making Ruth Reichl's Roast Pumpkin with Cheese Fondue.  It's a whole pumpkin filled with a strata, which is basically layers of bread, cheese, chicken broth and cream.  The strata becomes puffed like a souffle, but melted like fondue.  You can use any type of squash but kabocha squash is best.  Serve by scooping the souffle with a little bit of squash. 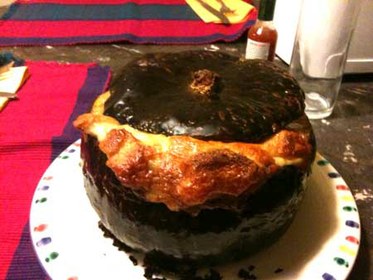 Preheat oven to 450F with rack in lower third.

Toast baguette slices in 1 layer on a baking sheet in oven until tops are crisp (bread will still be pale), about 7 minutes. Transfer to a rack to cool.

Remove top of pumpkin by cutting a circle (3 inches in diameter) around stem with a small sharp knife. Scrape out seeds and any loose fibers from inside pumpkin with a spoon (including top of pumpkin; reserve seeds for another use if desired). Season inside of pumpkin with 1/2 tsp salt.

Whisk together cream, broth, nutmeg, 1 tsp salt, and 1/2 tsp pepper in a bowl. Mix together cheeses in another bowl.

Put a layer of toasted bread in bottom of pumpkin, then cover with about 1 cup cheese and about 1/2 cup cream mixture. Continue layering bread, cheese, and cream mixture until pumpkin is filled to about 1/2 inch from top, using all of cream mixture. (You may have some bread and cheese left over.)

Cover pumpkin with top and put in an oiled small roasting pan. Brush outside of pumpkin all over with olive oil. Bake until pumpkin is tender and filling is puffed, 1 1/4 to 1 1/2 hours. 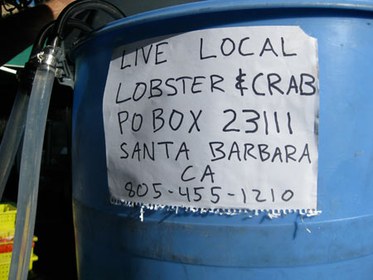 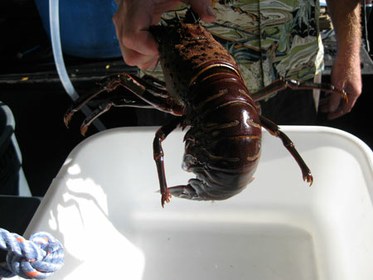 Charlie Graham is a licensed crab and lobster fisherman from the Santa Barbara area.  He is selling live, local spiny lobsters weighing about 1.2 to 2.5 pounds.  To cook a lobster, Charlie recommends barbecuing them.  Split them in half with a sharp knife.  Put butter and garlic on the meat and put them on the grill, meat side down.  Or broil them until the shell turn opaque.  The classic method is to steam or boil them.  They come every other week to the Wednesday Santa Monica Farmers Market and to Sunday Main Street (Santa Monica) market.

Photo Courtesy: Todd Porter & Diane Cu ( The White on Rice Couple ) Ching Ching Ni is a Metro Reporter for the Los Angeles Times . She recently wrote about the law...

This fall, Evan Kleiman is making Ruth Reichl's Roast Pumpkin with Cheese Fondue . It's a whole pumpkin filled with a strata, which is basically layers of bread, cheese,...

David Sax is the author of Save the Deli: In Search of Perfect Pastrami, Crusty Rye, and the Heart of the Jewish Delicatessen .

Alton Brown hosts Good Eats on Food Network.  His new book about the show is Good Eats: The Early Years .

Stacie Hunt is a certified AIS Sommelier who works with Splash Productions and Du Vin Wine and Spirits .