Laura Avery speaks with Jeff Rieger of Penryn Farms about his wonderful persimmons, now at their peak in the Santa Monica Farmers' Market. Varieties include Hachiya, Fuyu, Goshu. In November, he'll have “Child of the Stork” Tsuronoko persimmons. The Hachiya variety needs to be eaten soft and ripe. The Fuyu, the least astringent of his persimmons, should be eaten firm like an apple. The Goshu is really a giant Fuyu, is not as sweet or crisp, has less seeds, and is much larger. Get persimmons while you can, the season will only last two or three weeks.

Laura also speaks with Francisco Velasco, chef de cuisine at Il Grano restaurant, about chestnuts, and with George Schnurer of Betty B's Ranch, who's offering rare strawberry guavas. George says strawberry guavas, which taste like citrus and pineapple rather than strawberries, are called strawberry because of their red color.   George's wife shares her recipe for this delightful strawberry guava syrup.

Clean guavas with water, snip off ends an put in a pot.  Add sugar and lemon (or lime) juice.   Bring to a boil, lower heat and cook at medium heat for 5 minutes. Take care not to burn the mixture. Test for sweetness and adjust to taste.  Remove from heat and strain to remove seeds.  Refrigerate.

Serving suggestion: Use over vanilla ice cream or yogurt.

Russ Parson, contributor to the LA Times and author of How to Read a French Fry, reports on his favorite kitchen knives. The NYC knife store he mentions is Korin Fine Japanese Tableware and Chef’s Knives.

Gill Stannard, who listens to us from Austraila, wherer she has her own blog and radio show, has contacted us to tell us about the iconic Aussie dish, meat pies. She talked about Four'N Twenty meat pies.

Jonathan Gold of LA Weekly raves about the tacos de papas at El Atacor #11 on Figueroa near 26th in Los Angeles.

James Oseland, Executive Editor-in-Chief of Saveur magazine, recounts some of his Indonesian adventures from the past 25 years. He's captured the flavor of the islands in his new book Cradle of Flavor: Home Cooking from the Spice Islands of Indonesia, Malaysia, and Singapore.

Jet Tila tells us that there is a resurgence of pho shops on Western in Korea town. 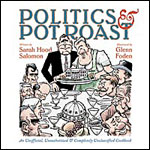 Sarah Hood Salomon shares some of the favorite dishes of America's First Ladies and Presidents. Her investigation into the completely unclassified and unauthorized recipes of the White House, Politics and Pot Roast: A Flavorful Look at the Presidency,  comes just in time for election-meal planning.

As the story goes, Sarah was concerned that the food at her large dinner party might not be very good so she wanted to take the attention off the food.  The DC-resident decided to pair her dishes with the White House. She did her research and found recipes such as Eisenhower Stew and Jefferson's Macaroons. The party was such a hit that Sarah decided to make it into a book. Three and a half years of research at the Library of Congress yielded recipes, stories of parties, weddings, and quirky tastes of Presidents.  To verify authenticity, she visited presidential homes and libraries. Still, she’s the first to admit that her bipartisan look at recipes and amusing anecdotes of First Families is not totally authentic—just pure fun!

Macaroons
This is an updated version of a recipe that Thomas Jefferson brought back from Paris.

Place almonds, sugar and salt in a food processor and chop very fine. Beat egg whites until foamy and fold gently into the almond mixture. Butter a large sheet of parchment paper and use it to line a baking sheet. Drop the batter by teaspoonfuls onto the parchment. Bake in the middle of a 300°F oven for 15-20 minutes or until cookies are golden around the edges. Let them cool, then peel the macaroons from the paper and store in an airtight container.