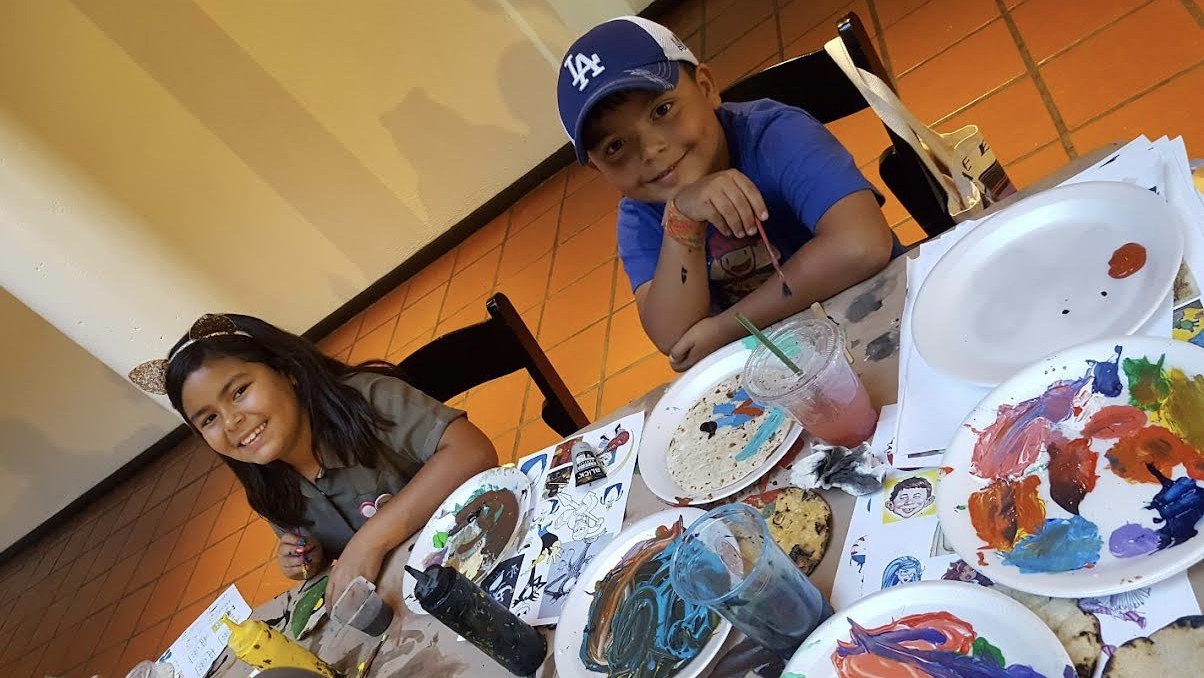 KCRW communications director Connie Alvarez explains the important history of tortillas to her kids at the inaugural Tortilla Tournament event in 2018. Photo courtesy of Connie Alvarez/KCRW

Connie Alvarez is KCRW’s communications director, and a brilliant writer — when she has the time. But she rarely does, especially as we go through our FUNdrive (are you a member yet?). So I bug her every year to write an essay for my #TortillaTournament, but this year was going to be impossible.

Instead, I decided to interview her about how she learned to cook tortillas — and how she’s done the same with her two children. This interview has been edited down to just the tortilla parts — enjoy!

It was mostly corn — we were heavily a corn tortilla family. But my mom was from Sonora, so she really did like the flour tortillas. But there weren't any around at the time that she thought were good. There were mostly those puffy Mission ones. I don't even know if Mission existed. But their version of horrible blandness was at the supermarket. So she didn't buy them — she’d say, “Ay, están muy malas.”

My dad was big on telling us about the corn, and how important corn was, and the corn gods. And he knew their names. I don't remember them, but it would be like…I forget his name, whatever the Nahuatl name for the god of corn. And he would always tell us that. It was so funny because my mom would try to be like — we weren't very religious, but she would tell us – “Diosito, Jesús,” and she was trying to tell stories, and then my dad would interrupt with, “Pues, sin agua, y sin lumbre, y  sin esto y otro. ¿Y sin maíz?” He always took us to a different perspective.

I was five or four when I started flipping tortillas. I would always be standing not on a chair, but on a stool. If everyone was already seated, and my dad in our little apartment was seated in the place where he was the furthest and kind of trapped unless my mom got up. My mom would be the last one to sit down, like very many moms, to start eating. I would always feel sorry for my dad being trapped and for my mom being the last one to sit. So I would be — and then, of course, I felt like a big girl — I'd be like, “I'll do it.” 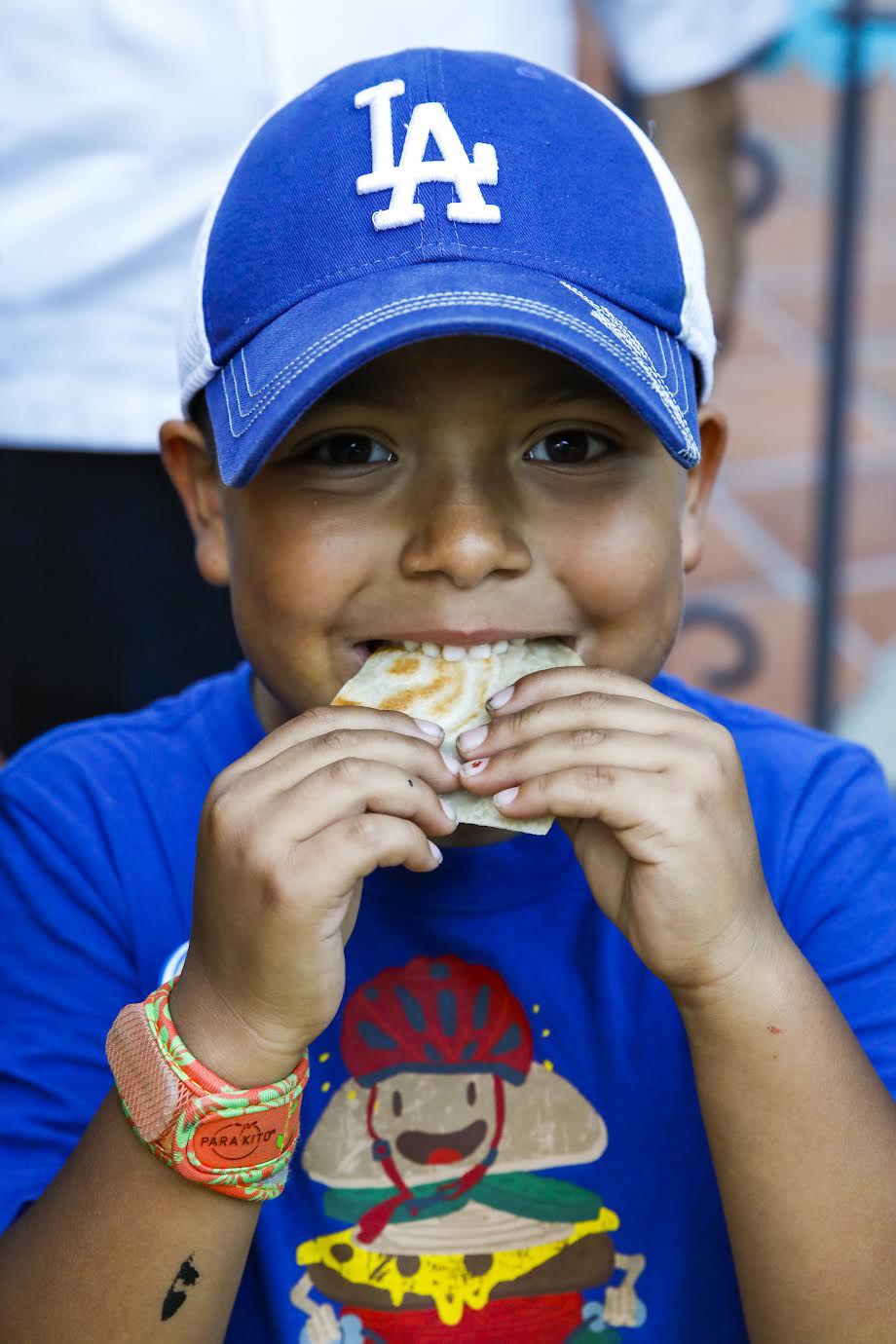 Connie’s son Max tries a tortilla at the inaugural Tortilla Tournament event in 2018, when his tortilla expertise began. Photo by Brian Feinzimer.

With my son, he went through a little phase of — I don't know what it was, but of not wanting to eat tortillas. It might have been TV, or his little YouTube videos, or something. Nobody there ate them there. So to him, it was a thing that isn't done. And so he just was kind of like, “No, no.” I could tell it wasn't about taste or anything. It was about – this is supposed to be weird? And I'm like, “It's a tortilla. Everybody eats them. It is normal.”

But he wouldn’t. And then one time, he said, “I hate Mexicans.” I was like, “What?” But he meant he hated Mexican food. Like, he did not want me to force him to eat tortillas. He did not like beans. And it wasn't even that he didn't like beans. Like, he literally wouldn't even taste them. It's because he didn't see them anywhere, on online, or on television.

So then I consciously started to get him into liking tortillas. But when he specifically really got into it, it was during the first Tortilla Tournament.

And I said, “No, this is what's genius about this contest that you have to like. You're actually thinking about the tortilla itself, you know what I mean?” Like, on its own, because everybody forgets to remember that it adds something to the whole meal. It's the thing that carries the whole thing. And if you have a really bad tortilla, you can ruin the experience.

And so I saw them start to sneak one bite. But especially when I get really excited about one or say, “Oh, this is terrible.” And they're like, “Why?” The curiosity was born — like, why is it bad or why is it good? I was really happy about that — having all those different varieties and being able to tell them how this one tastes — now taste this one versus this one, and now taste that one. And then especially if I couldn't decide something, they definitely would help me break the tie.

Now, they're pros. They remember the names of the tortillas and everything. Now, they're like, “Can you save those?” They basically are telling me, “Can you try to keep your tasting down to one so we can have the rest?”

They get excited about tortillas now. It's funny because I was thinking about it and I go, “Why?” Why was it important for me to have them have tortillas? I'm like, “Okay. It's such a basic Mexican cuisine, and who we are, and all that stuff.” But I don't know. On the one hand, it's my preference and I never have a basket of bread at the dinner table.

But sometimes, I picture it kind of like, it's this crazy little disk. This ancient little disk, right? I just picture literally a cartoon of some Mesoamerican family — all drawn the way they're drawn, the way they’re chiseled, handing their kid tortillas, and their kid grows up and does the same, and all of them having this little cake made of corn. Whether it's thick or thin, large or small, it's that same basic thing. And that is what I think my dad was telling us every time he would tell us about using my eyes — it's like this thing that just has gone through family tables or family fires for so many centuries. And the tortilla doesn't change.