Devil in the Kitchen 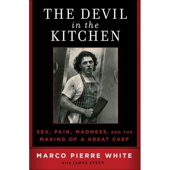 Marco Pierre White is the most decorated chef in English history and the youngest chef ever to win three Michelin stars. His London restaurant empire includes Belvedere, Criterion, Drones, L'Escargot, Mirabelle, Quo Vadis, and the Frankie's chain of pizzerias.

Known as the enfant terrible of London's culinary world, White created a world of perfectionism, unpredictable fury and tempestuous behavior in his kitchens, with passionately creative and delectable dishes transcending it all.  His relentless pursuit of Michelin stars seemed to leave him empty despite the success, and he re-focused his priorities.  Now, with confidence and experience measuring his success, he's returned his Michelin stars and turned his attention to the young chefs that he mentors, developing his portfolio of restaurants and being a father to his four children.  Marco reflects on his reputation, how he was drawn to cuisine and what lies ahead.

The Devil in the Kitchen: Sex, Pain, Madness and the Making of a Great Chef is Marco Pierre White's latest book.

One of the biggest environmental issues facing the world today is global warming. While its affect on weather patterns, ice caps and rising ocean levels is largely...

Laura Avery meets with long-time farmer Elmer Leaman, who talks about his peaches. They are a special variety that he only brings to the farmers' market. Because pointed...

Even the simplest of dishes can be made more exciting, sophisticated and flavorful with a burst of spices and seasonings not commonly used in American kitchens. Eric Gower...

There's a New Chef in Town

From the time he was a teenager, Gavin Kaysen knew he wanted to be a chef. Now, at 27 years old, he is one of the great up-and-coming chefs. Gavin recently competed in the...

Melody Dosch left behind a career in law to become the purveyor of The Artisan Cheese Gallery, a specialty and gourmet cheese shop in Studio City that she owns with her...

Noted food historian Barbara Haber celebrates the life of the late Karen Hess, a primary figure in launching culinary history as a studied discipline. Hess died May 15, at...

Devil in the Kitchen

Marco Pierre White is the most decorated chef in English history and the youngest chef ever to win three Michelin stars. His London restaurant empire includes Belvedere,...

Recently, Evan Kleiman participated in a group "taste test" at Campanile, which was organized by the Los Angeles Times. The main course? Beef, one from a natural source and...