Shamelessly preaching to the choir It took me three hours to fall in love with Taylor Mac's "A 24-Decade History of Popular Music."

Before I can even begin to explain what's so extraordinary about the show, or why 3 hours makes up barely act one, I have to orient you to the it of it.

Taylor Mac's broken down the 24 decades between 1776 and 2016 and created a 24 hour show that dedicates an hour to the songs of each of those decades. 24 hours - 24 decades, got it? Okay, the show in LA is being performed in six hour chunks across 4 nights. The first two happened this last weekend so there are still two more to go.

Now most superficially, the show is sort of a survey course in the songs that kept America humming.  It's a history lesson and an act of accumulation. But it's not a straight history lesson.

Now, might a good time to mention that Taylor Mac is a fabulous drag queen so this story is both queer and complicated.

At the same time the show is building 24 hours of performance it's a deconstruction and reconstruction of our shared American History - so we're always working backwards and forwards at the same time:  both making and unmaking. The heavy lifting of the show is done both through the songs themselves and through what feels like accidental chatter and anecdotes.

So in the heart of 1796 to 1806, Taylor Mac's pitted the temperance movement against a bunch of drinking songs.  There's a choir donning bonnets that look like they were stolen from the set of "Little House on the Prairie" and there's a back and forth between songs of debauchery and restraint.  To make things a little more fun, the whole audience has been given a beer to join along.

In the midst of this, Taylor Mac tells us a story of a night out with fellow queens at a New York Polish diner - it's a confrontation between the straight world, the queer, and a pierogi that we expect to end poorly with fear and shame leading to violence and oppression.

The story feels incidental.  What does the threat of gay bashing in the East Village have to do with the songs of an 1806 temperance choir?

That's the mode of questioning the show is asking the audience to engage in. What does our heavy past have to do with our troubled present - and what do we all do with it?

It's only several songs later, after a beautiful arrangement of Auld Lang Syne, that the act closes with Taylor Mac at the center of a tableau surrounded by that temperance choir.

The performance is so stunning, it took me a  moment to realize that Taylor Mac was no longer wearing a spectacular costume and headdress but instead stripped to little more than a glittering, bedazzled pair of briefs. There is no shame and certainly no temperance . . . and that's the point.

I've been complaining a lot in recent weeks about art that relies and perhaps panders to a liberal audience about liberal concerns.  I've been questioning the point in a moment that seems to require something more than a passive audience. One could question whether this audience is really learning anything from a sung history lesson they didn't already know.

But let's face it, if you're going to preach to the choir you might as well do it in drag with an actual choir.

The last two nights of Taylor Mac's marathon are this Thursday and Saturday.  If you can get a ticket, you must. This show is essential.

"A 24-Decade History of Popular Music" is being presented by UCLA's Center for the Art of Performance downtown at the Theater at the Ace Hotel. 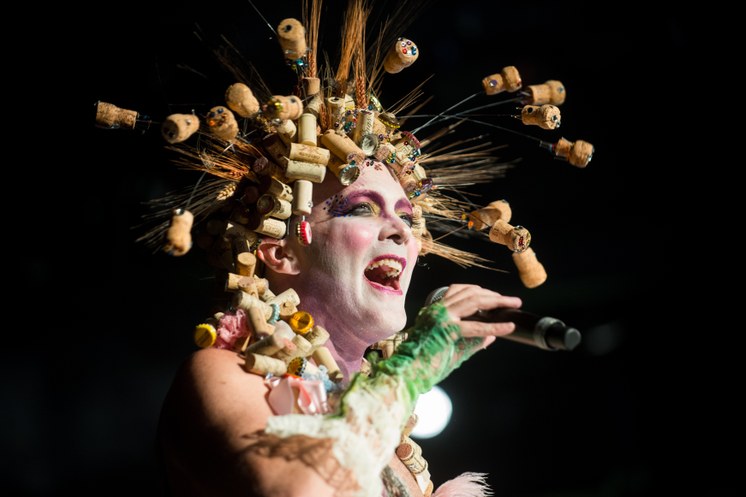