Andy Statman's Journey, an original radio documentary commissioned by KCRW and produced by Jon Kalish, takes listeners on a musicial and spiritual odyssey with the New York virtuoso who has been wowing bluegrass, klezmer and jazz audiences for 40 years. Andy Statman is widely considered one of the most gifted mandolin players on the planet and has left audiences shaking their heads at his blistering bluegrass picking and poignant waltzes.

But he is equally acclaimed as a clarinetist in the klezmer and jazz scenes. 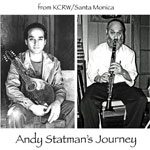 For more than ten years, Statman has been playing jazz versions of chasidic melodies on his clarinet. A chasidic Jew who lives in one of Brooklyn's religious neighborhoods, the 56 year-old musician has been the subject of several radio stories by the Manhattan-based Kalish, who had previously been commissioned by KCRW to prepare radio documentaries on such New York characters as Jimmy Breslin and Spalding Gray. Kalish was recently honored with the prestigious Gabriel Award for his program, Rabbi Abulafia's Boxed Set, which KCRW also sponsored.

Andy Statman's Journey includes interviews gathered over a period of 13 years and music from two recently released Statman CD's, as well as un-relased albums and field recordings at a New York synagogue where Statman's trio has performed for the last seven years.

Andy Statman's Journey provides a portait of a brilliant but uncompromising artist who is more devoted to following his muse than navigating the commercial music world. Among those heard from in this half-hour documentary are the respected jazz pianist Kenny Werner and bluegrass standout Ricky Skaggs, who describes Statman as "John Coltrane and Bill Monroe poured into one person."

Note: Statman will perform at the Getty Center at 3pm on January 18. Although the performance is free to the public, reservations are required.