In this week’s Scheer Intelligence, Jamie Garcia of the Stop LAPD Spying Coalition discusses predictive policing and its impact in our communities.  Garcia says about predictive policing, “We have to understand how it's a part of the larger, national changing nature of policing and you talk about how counter terrorism programs and counter insurgency programs are now becoming part of domestic law enforcement.” She adds that predictive policing is pushed in our communities as part of “the war on terror” and the continual need to be fearful of something, but it “is part of a larger architecture of surveillance. It's part of a larger information sharing environment.”  And as history has pointed out, predicting crime goes hand in hand with discrimination and targeting of minorities.  As an example of racial bias, Garcia says when Jeff Brantingham, co-creator of PredPol first talked about creating the program, “there's a picture that he has in a slide where he's talking about predictive analytics. He shows a picture of Afghani men and a picture of Latino youth, side by side. One being the international terrorist, and one being what you would call a domestic terrorist.”

Scheer explores the reaction of elected officials to the programs he calls “the spying operation of your citizens” as well as how these programs are being implemented in one of the most liberal states in the country.  Garcia responds with an example, “[we] had an active campaign against the drones. We collected 3,000 signatures throughout the city of LA that said no to the drones… LAPD did its own community surveys out of their results, 99% of the community they surveyed said no. The Los Angeles Police Commission said, ‘Well, we know the community doesn't trust the police, but we do. We're passing this program through.’ When it came up for vote in city council, when they had to finally approve the money for the drones, we went, we told them, ‘We don't want them, here's all the proof that the community doesn't want them.’ Again, they themselves said, ‘We trust the police. We are going to give them the drones.’”  Not giving up, Garcia remains optimistic that public involvement will have an impact to better our communities. 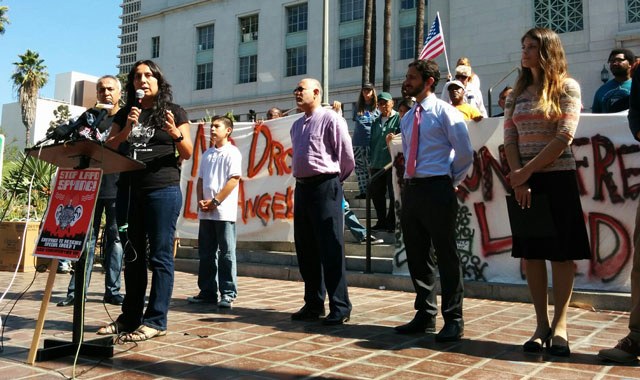