The new documentary He Named Me Malala tells the story of the young activist Malala Yousafzai, whose outspoken advocacy of education for girls made her the target of the Taliban. At age 15, Malala was shot in the head while en route to school in Pakistan's Swat Valley. Yet she survived, and now lives with her family in the UK. Malala continues to speak out for female education, and at 17 became the youngest person ever to win the Nobel Peace Prize.

Davis Guggenheim, the filmmaker behind He Named Me Malala won an Oscar in 2007 for the Al Gore climate change documentary, An Inconvenient Truth. The following year, he directed a short biographical film about then-senator Barack Obama that aired during the 2008 Democratic National Convention.

Guggenheim's father Charles was also a documentarian who made campaign films for Democratic presidential candidates, including Robert Kennedy.

Growing up, Davis Guggenheim admired his father's films, but never wanted to do the same type of work. He struggled for years to find work in television, eventually finding success working with David Milch on shows like NYPD Blue and Deadwood.

His real dream was to direct Hollywood feature films, and he thought he had his chance with Training Day. Guggenheim worked to develop the script, sold it to Warner Bros., but insisted they cast Denzel Washington. The studio was hesitant at first, but finally agreed to bring Washington on board. Days later, Guggenheim was fired. He still doesn't know exactly why. 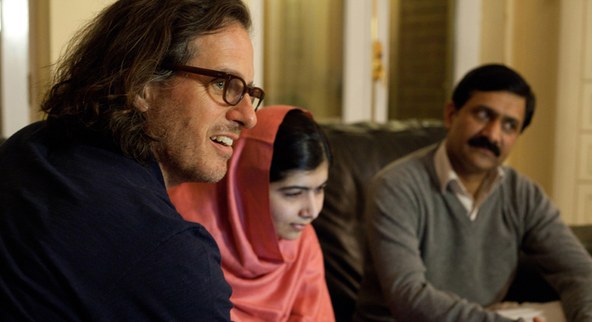 Feeling burned and heartbroken, Guggenheim decided he was done with Hollywood features and wanted to start making movies about people he actually liked. He got a job as an executive at Participant Media, then a fledgling production company founded by entrepreneur and philanthropist Jeff Skoll. Guggenheim says he made a lousy executive, and decided to quit. But just as he was walking out the door, An Inconvenient Truth was walking in. The rest, is history.

The new documentary He Named Me Malala tells the story of the young activist Malala Yousafzai, whose outspoken advocacy of education for girls made her the target of the...

END_OF_DOCUMENT_TOKEN_TO_BE_REPLACED
KCRW's Good Old Fashioned Pledge Drive:  Donate by MIDNIGHT TONIGHT for your chance to win the soon to be released Apple iPhone 13 and support the music, news, and culture you love.