The dystopian thriller Snowpiercer has a respected director, a recognizable cast and critical acclaim. But on its opening weekend in June, it only played at eight theaters. Just two weeks later, Snowpiercer was available on VOD. With all the hype, many wondered why the film didn’t stay exclusively in theaters longer.

Radius, the boutique label of The Weinstein Company, is the distributor behind this multi-platform release plan. Kim Masters spoke to Tom Quinn, the co-president of Radius, about the economics of VOD and whether or not he left money on the table with his strategy for Snowpiercer. 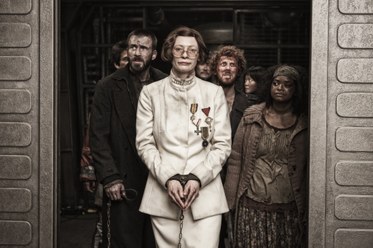 Radius Puts Summer Indies in Theaters and Your Living Room

Michael Schneider of TV Guide Magazine is joined by Matt Belloni, Executive Editor of The Hollywood Reporter to discuss top entertainment news stories of the week.

The dystopian thriller Snowpiercer has a respected director, a recognizable cast and critical acclaim. But on its opening weekend in June, it only played at eight theaters....

Charlie McDowell and Mark Duplass on ‘The One I Love’

Another Radius film, The One I Love, also has a non-traditional distribution plan. This sort-of-romantic, sort-of-mysterious indie went a route that’s known as ultra-VOD,...