Few actors have the ability to move as gracefully from stage, to screen, to film as Stockard Channing. Regardless of the artistic medium, the characters she plays are always infused with a rich emotional history and have a penchant for keeping secrets. From her early stage work in productions like Joe Egg and Hapgood to her portrayal of First Lady Abbey Bartlet in The West Wing, to her most recent turn as matriarch Polly in Other Desert Cities, she has made a career out of characters who are actively hiding something. This week, Stockard and Elvis reunite for the first time since 2002, to analyze this curious theme in her work. As she approaches her 300th performance in Other Desert Cities, for which she has received her seventh Tony nomination, Channing also reminisces about the more trivial, from the odd sounds she has heard from the audience, to the absolute worst question you can ask an actor. 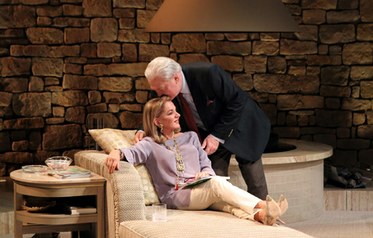 Stockard Channing and Stacy Keach in Other Desert Cities