"The Rise and Fall of the City of Mahagonny must offend and repel its audience if it is to succeed." So reads the opening line of the introduction to W.H. Auden’s English translation of the 1930 Kurt Weill-Bertolt Brecht opera. If that is indeed true, then Los Angeles Opera’s new production of Mahagonny--which saw a few boos and walk outs at its premiere--is at least a partial success.

Much of the repulsion at Saturday’s opening night was due to the blunt, vulgar nature of the work itself. Mahagonny is a musical tale of schemers, whores and other down-and-out denizens of a city, which in John Doyle’s new staging, looks suspiciously like our own City of Angels.

Some of the offense, though, must be credited to Doyle. The director stages this unwieldy piece of music drama with style--the trappings of Americana that descend slowly onto the stage all gleam impressively--but without a coherent vision of the piece. Weill and Brecht were forcefully shaking their fists at Weimar decadence; it’s hard to determine Doyle’s target. There are subtle (as well as extremely unsubtle) gestures implicating the Third Reich, Americans, and of course, capitalism; rarely though is the authors’ original agitprop made clearer or more immediate.

Still, for all of Doyle’s directorial decisions that repel in a bad way--like Nazi rally sounds that accompany a somber "sieg heil" at the end of Act I--there are flourishes that offend in exactly the manner Mahagonny’s creators intended.

In scene six, Jenny Smith--the hooker with the heart of copper--is procured by Jimmy McIntyre, the opera’s anti-hero. The role of Jenny was originated by Weill’s wife, Lotte Lenya; here Jenny’s played by Broadway star Audra McDonald. As Jenny straddles the customer who will become her lover, the scene becomes awkward and hard to watch--yet McDonald’s beauty and raw sex appeal make it difficult to look away. Likewise, Jenny’s words are coarse and depressing, but the combination of Weill’s melody and McDonald’s gorgeous voice is so seductive, it’s impossible not feel a jolt of theatrical energy. When the scene is over, you don’t know whether to clap your hands or wash them.

This is the manner in which Mahagonny is supposed to offend--showing that the thrill of live theater cuts two ways: the frivolous highs of escapism matched with the brutal lows of realism. Sadly, unlike Weill and Brecht’s best known work, The Threepenny Opera; Mahagonny doesn’t consistently provide this level of theatrical experience. Despite McDonald, Patti LuPone (and her rich, expressive voice), plus excellent playing by the orchestra, the opera’s three hours creep by slowly. Doyle and LA Opera’s attempt to revive Mahagonny is not risible, but far too much of it falls flat. 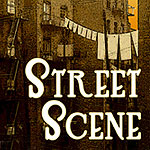 While downtown plays host to an expensive, thoroughly professional production of a Weill opera that might be better left on the shelf; the Valley is home to a ragtag version of a Weill show that merits much more exposure. On Monday night, Musical Theatre Guild presented a semi-staged concert production of Kurt Weill’s little-performed Broadway musical, Street Scene, at the Alex Theater in Glendale. Street Scene (based on Elmer Rice’s Pulitzer Prize-winning play) reveals a different side of Weill. Instead of smelting cabaret tunes with Second-Viennese school atonalism, as in Mahagonny; Street Scene shows the German-born composer warmly embracing the idiom of American showtunes.

Musical Theatre Guild’s concert staging features some pleasant singing, but its workshop, script-in-hand style lends little luster to the ensemble, character-driven piece. Luckily, the show is solid enough that for the most part, it speaks for itself. Weill’s 1947 collaboration with Rice (aided by lyrics courtesy of poet Langston Hughes) is not as artistic or provocative as his work with Brecht; still, Street Scene is straightforward, well-crafted, commercial theater, which--far from repelling or offending--leaves you wanting more.

Street Scene repeats Sunday afternoon at the Thousand Oaks Civic Arts Plaza; The Rise and Fall of the City of Mahagonny runs through March 4 at the Dorothy Chandler Pavilion.