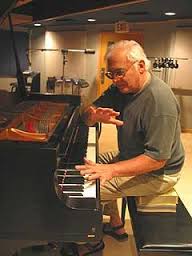 I’ve written about Paul Bley because he is one of the most interesting jazz pianists to come of age in the early 1950’s, when so much was happening in the jazz idiom.  Paul Bley was a pianist’s pianist, a pianist that other jazz artists respected, especially those bassists and drummers who were lucky enough to work with him.  Bley was the archetypal New York jazz musician;  he didn’t tour through the U.S., preferring European bookings. Unlike more commercially-successful pianists like Brubeck or Oscar Peterson, he didn’t really care about selling records.  Besides, his style was too elliptical and challenging for the casual jazz listener.  You’d have to accept a lot of abstract ideas that were a hallmark of his singular style.

He was born November 10, 1932 in Montréal, Quebec, beginning piano studies at 5. At 13 he formed his own band, the Buzzy Bley Band; at 17, after a filling in for Oscar Peterson (no small feat for a teenager) he headed to New York City and Juilliard.

His first album came in 1953 on Charles Mingus’ Debut label, with Mingus on bass and Art Blakey playing drums. Bley proved himself a great bebopper but also added a bit of modernism into the mix—perhaps a result of studying at Juilliard; he also studied privately with a modernist classical teacher in France. The result was a rich mix of both hot and cool, of traditional and abstract avant-garde.

In 1958, Bley was in Los Angeles, playing at the Hillcrest Club in what is now Koreatown, with Ornette Colemen, Charlie Haden, Don Cherry and Billy Higgins.  The side-long version of Coleman’s “Ramblin” is a must for any Ornette fan. Ornette rarely used piano players after that.

Bley also did a fascinating album headed by clarinettist Jimmy Giuffre called 1961. Originally recorded by Verve, it was never released until recently, by ECM. On another early Bley album, Solemn Meditation, done for LA-based label GNP (Gene Norman Presents), the liner notes were by a young composer named Carla Borg, who later married Bley and kept his name after the divorce.

Bley never returned to LA after this early period, preferring to live in the jazz mecca known as New York City.  I met him on a trip to NYC in 1977.  We went to his favorite pizza joint in the village and he ordered an uncooked pizza.

In later years he recorded cerebral, impressionistic solo albums for ECM. He also did a number of trio dates in Europe. I read that he didn’t rehearse for the solo shows, but rather did free improvisation. In this respect he is like Keith Jarrett, who is famous for doing this in his solo piano shows.

His discography is lengthy;  here is the Wiki entry:

Here are links to some earlier posts I wrote featuring Bley:

Here is Bley with the late Charlie Haden at Lincoln Center in 2000.  His playing ranges from abstraction to utter lushness.

and solo piano in Oslo in 2006.  Sometimes you’d think he was playing modern classical music, not jazz improvisation.

‘I had nothing else to lose’: Wild Belle’s Natalie Bergman on seeking grace from tragedy on solo debut ‘Mercy’ Music News Jul 13