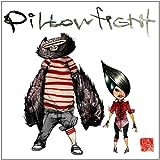 Dan Nakamura, aka Dan the Automator, has long been a favorite mixmaster amongst the KCRW DJs and our listeners alike.  Collaborations with DJ Shadow (Dan’s “Bombay the Hard Way” project), Del the Funkee Homosapien & Kid Koala (Deltron 3030), Prince Paul (Handsome Boy Modeling School) and Damon Albarn (Gorillaz, DRC Music) have made clear his similar status amongst discerning artists as well.  So when word leaked out last year that he was working a new project designed for a female vocalist, there was no question we wanted to hear it.  The only question was: who was going to be the vocalist?

Thanks to an introduction and recommendation from Kid Koala, one-time LA resident & now Brooklyn-based indie singer/songwriter Emily Wells was the pick, and after listening to their Pillowfight project, it’s no wonder.  Emily’s smoky vocals lend a particular attitude to the proceedings – sultry, sexy and self-aware.  Dan’s shuffling beats and moody soundscapes (with help from Kid Koala and a couple of cameos from Lateef the Truthspeaker) suit Emily perfectly, making for a musical Reese’s Peanut Butter Cup, with two great tastes that taste great together!

Pillowfight will be available to stream on demand from Monday January 21 through January 28, 2013.