It’s September 4, 1986. And Deirdre has just met a kindred spirit in singer Syd Straw. Like Deirdre, Syd traveled in good company. You could pick out her voice on records by Los Lobos, Rickie Lee Jones, Was (Not Was), and more. As an early member of the indie supergroup The Golden Palominos, she was a feature on Deirdre’s playlists long before she became a regular guest.

Most artists that appeared on “SNAP!” will tell you how comfortable Deirdre made them feel. That absolutely resulted in fantastic on-air performances. But Syd and Deirdre took that to a whole new level. If Deirdre had an official partner-in-crime, it was Syd Straw, who appeared on the show five times. She would sing with a band, or over backing tapes that she brought with her, or she would just guest DJ. And no topic was off limits. They had their own wild chemistry: funny, fearless, and more than a little bent.

In 1989, Syd struck out on a solo career which eventually took her to New York City. But even now, Syd is rich with memories of the pioneering DJ and friend whom she called “The Godmother.” Syd Straw: It used to be perhaps easier, in extreme youth, to carry your unguarded self into a room and then have many countless strangers listening to you. It takes a certain amount of innocence and hubris, too, to be in that position and have it seem worthwhile.

I was going to have a show at my favorite venue, McCabe's Guitar Shop. And she was already friendly with [former dB's frontman and songwriter] Peter Holsapple. Peter and [bassist] Ilene Markell were playing with me, and somehow they must have talked Deirdre into having me come aboard. I really didn't know anything. I actually remember seeing her for the first time through the glass. And they didn't warn me about how wonderful she was or anything.

It's very nerve-wracking to sing on the radio. I'm a nervous person. I love giving shows, I love it so much. But I'm actually ... I have to force myself to be gregarious, because I am secretly shy. I'm shy but loquacious, and I appreciate that she just had a gentility, and a level of providing ease and comfort. She was just so charming.

Deirdre O'Donoghue: Syd Straw’s laughing there in the background. She and Peter Holsapple and Ilene Markell have been entertaining us royally tonight with a live performance here at KCRW, Santa Monica.

Straw: ...or at least amusing ourselves.

O'Donoghue: Well, that's what it's … I mean, eventually, beyond that, who cares? You amused me. You entertained me. So I’m happy. 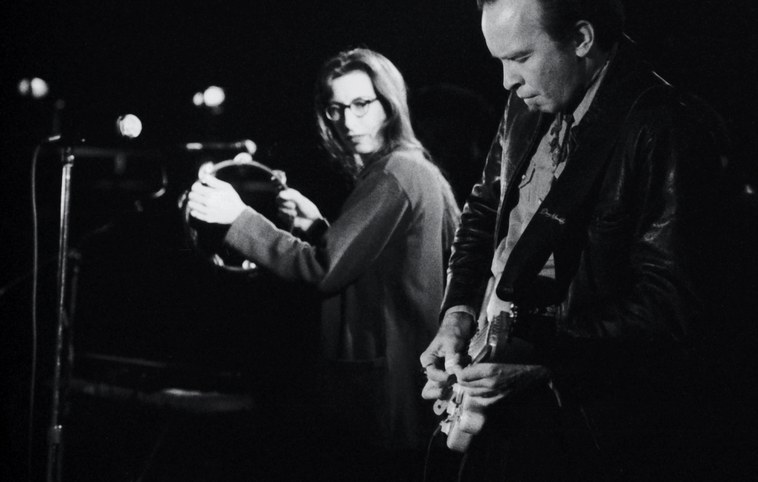 Syd Straw and Dave Alvin (The Blasters, X) performing in the 1980s. Photo by Dennis Stein.

I remember we did lots of Peter's songs because he knew how to play them. And his songs are so great, I love to sing them to this day. It was very exciting to warm up on the air, and with Deirdre. And she came to the show the next night.

O'Donoghue: Chrissie Hynde has long been a hero of mine. But it was ... Pardon me, Queen Chrissie, but here comes Emperor Syd. Syd’s voice, especially when she does the harmonies with Peter; Peter’s playing and his songwriting; and Ilene’s very fluid bass work … The three of them were just born to be together. I don't know what they're all doing in separate groups. Anyway, if you missed it last night, you missed it. Any opportunity you have to see any one of those three people, I encourage you to take it.

Radio was, at that time in life, really one of my best friends. And back then, Deirdre was really a kind of audio home base. And of course, it's the best thing in the world to hear yourself on the radio. It's the biggest excitement. So the fact that you could have a little part-time friendly home was so delightful. She was like the Godmother. And indeed, she really was a godmother to me and lots of people I know.

Once, Jackson Browne heard a song that I played with [guitarist] Marc Ribot called "Don't Walk Away," and I played snare drum on it. Jackson Browne was driving around listening to KCRW. And he actually drove straight to the station, but by the time he got there, we were already gone. So he came to my show the next night, and I remember standing on the stairs up to the green room. And he said, "You know, I tried to find you at KCRW last night at Deirdre's show. And I came there, you were gone." And I said, "Oh, you know, I can be like that, all elusive and whatnot."

Deirdre was in love, in a beautiful way, with the musicians that she loved. She gave you the impression that she was in love with what you did. If she loved your music, it was like she had a crush on it. She treated it as a romantic friend.

In early ‘91, I moved back to New York. I don’t remember the last time I talked to her. I think I called her from the road at some point, and she just sounded tired. And I didn’t know why. She didn’t throw her business in everyone’s face. She was really very, very private. And I considered her a bit of a Greta Garbo figure: “I vant to be alone … vith you!” [Laughs]

I remember busting a gut when I heard that she died. And I’ve lost so many friends since then, but she was one of the first significant losses in my beautiful life.

It's a big deal to be on the radio. It still is, and I hope that this show you're putting together ... I hope we play it loud and it vibrates out and finds the cloud that she's lurking on and makes her happy, because I hope she knows how much she is loved to this day. I'm missing her so much right now. It's so nice to have an opportunity to think about her and to talk about her. It's so long that she's been gone. But her influence remains steady and true.

Syd Straw is currently meandering through the woods of Southern Vermont and working on music, including a new solo album and a musical.