Throughout “Bent By Nature,” you’ve heard many stories of the lifelong connections set in motion by Deirdre O’Donoghue. But none were quite as surprising as the bond between Deirdre and fellow iconoclast Henry Rollins, the former Black Flag frontman, musician, writer, actor, activist, and longtime KCRW host. After a chance meeting in early 1984, Rollins became a regular voice on “SNAP!” And he quickly became one of her most treasured co-hosts and friends.

In our final episode of “Bent By Nature,” Rollins shares his remembrances of Deirdre: the DJ, tastemaker, and human being who changed his life irrevocably.

“You’re impossible to pigeonhole is what you are. You are simply Rollins. That’s all there is to it. And I rather like it.”

Henry Rollins performing with Black Flag at Mi Casita in Torrance in 1983. Photo by Kevin Salk.

I believe I met Deirdre in 1984. I forget how it happened, but I ended up on her KCRW show "SNAP!" to be interviewed. After the show was over, we stayed at the station for a few hours. I told her I had brought some tapes of music I was listening to at the time. She was very interested in hearing what I was into. I was struck by how enthusiastic about music she was. This was the beginning of our friendship that lasted until she passed away.

In those days, I was in a touring band and out of California for months at a time. When I would return, it usually wasn’t for very long, but I always tried to get over to Deirdre’s apartment to visit and catch up on what music was currently captivating her. There were always new bands and artists she was excited about. Rarely was she lukewarm about a group. If she mentioned a record at all, it was because she found it almost impossible to stop playing it.

Whenever I could, I would go to KCRW with her and watch her do the show. I was her vinyl roadie. She had these large, as I remember, blue canvas carry bags for records. Both would be full. We made an odd couple. She, this effervescent, slight, ball of energy, and me, a long-haired, tattooed guy in a rock band. Many nights, I would hang out with her at the station, crash on her couch, and then take two busses back to Redondo Beach, where I was living. 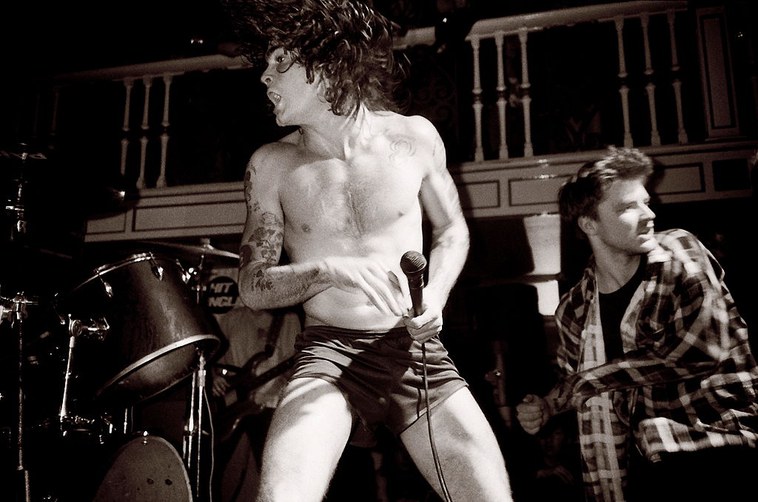 "We made an odd couple. She, this effervescent, slight, ball of energy, and me, a long-haired, tattooed guy in a rock band," writes Rollins, pictured here in 1984. Photo by Martin O'Neill/Redferns.

We would hang out in her living room, which was filled with records. She would play one after another. I took notes and made tapes to take on tour, which eventually I would have to leave for. She ended up being a huge influence not only on what I listened to, but how I appreciated music. She was so completely open to pretty much anything that was happening. She was completely consumed by music.

"SHE ENDED UP BEING A HUGE INFLUENCE NOT ONLY ON WHAT I LISTENED TO, BUT HOW I APPRECIATED MUSIC."

I would go through her tapes and find demos sent to her by famous artists who just wanted to keep her in the loop with what they were doing. Christmas cards from George Harrison and others showed up around the end of the year, and lots of signed records were always leaning against the over-packed shelves. Whenever the phone would ring, I would grab it and say, “Deirdre O’Donoghue’s residence, who may I say is calling?” One time, when John Cale replied, I almost threw the phone. She and I were at his show later that night.

Bands who were reluctant to be interviewed said yes to Deirdre. I think it’s because they felt she really got what they were doing. She wasn’t working in radio for the fame or the paycheck, Deirdre really loved music and the people who made it. One night, she cooked dinner for Nick Cave and I. There we were, the three of us, at her small kitchen table, her pair of finches talking nonstop.

She and I talked a lot about music, of course, but about our lives, how we were raised and what we were going through. I ended up getting to know her pretty well. She was a kind person, but quite tough, to the point of being scrappy. I think she had been through quite a bit in the boys club environment of working in radio for so many years. It was that mixture of being ready to stand up for herself so she could stand up for the music she loved playing for her appreciative audience that really moved me. Sometimes, she seemed larger than life and at other points, very small and isolated. A woman who lived alone in a small apartment, up-to-here with books, records, and tapes.

As I went to the studio with her more and more, she could tell that I wanted to do what she was doing. Slowly, she started teaching me the ins and outs of presenting songs, throwing to the next block, back announcing, and keeping everything moving and as captivating as possible. One time, she told me something I’ll never forget, and perhaps the most insightful advice on radio hosting I’ve ever heard. 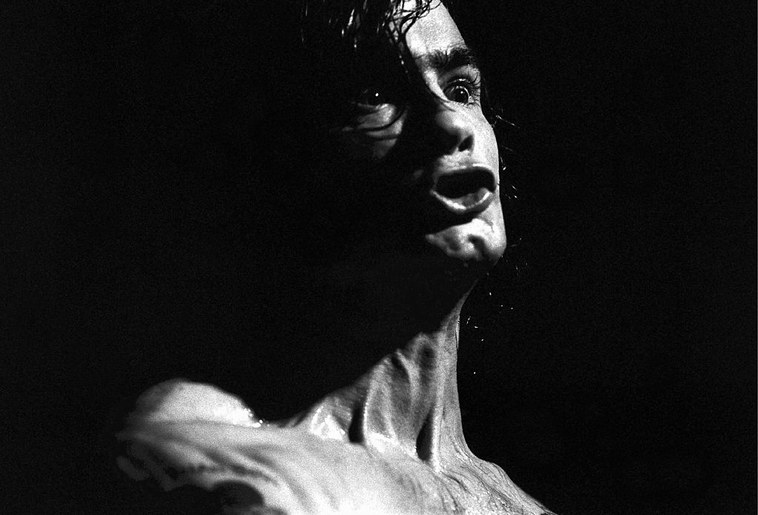 Rollins performing with Black Flag in 1984. Photo by Martin O'Neill/Redferns.

She said that the goal was to keep the listener with you for the entire show, and to do that, you had to give them something familiar and then when the time was right, make them work a little in order to expand their range of appreciation. She likened it to bringing a marlin up from the sea and into your boat. They’re listening, so you have them hooked. By playing something familiar or somewhat popular or easily digested, you give the listener a little line. Then, it’s time for a track from "The Pearl," the new Harold Budd/Brian Eno/Daniel Lanois album, which is excellent but doesn’t necessarily jump into your lap like a track by R.E.M. This would be taking some line. You give a little, take a little and by the end of the show, the listener is in the boat and will hopefully be back next time. It’s a great way to build a show and keep the listener engaged.

"She was just the messenger, the music was the star. She wasn’t a mere presenter. You got all of her."

Deirdre had a beautiful speaking voice. I can hear it in my mind right now. She had this clear, intimate, close to the mic delivery that made you feel like it was just the two of you. I think one of the reasons she did it this way was to always let the music be the focal point. She was just the messenger, the music was the star. She wasn’t a mere presenter. You got all of her. She loved talking about the bands and the music while on the air. It was one of the best parts of the show, listening to this funny, fearless woman so full of delight as she detailed facts and thoughts about the music. Lots of notes in her large, rounded style, covered pages for every show. She did a lot of prep. There were notepads all over her place. I think it was impossible for her to “phone it in,” as she truly loved being on the air with the listeners and the music. Hers was easily one of the most consistently listenable shows I’ve ever heard.

I often couldn’t believe the records I was now struggling to purchase on my severely constrained, guy-in-a-band budget because I had heard them via Deirdre, either on the show or at her apartment. There I was. buying Laurie Anderson’s amazing "Mister Heartbreak" album, causing me to miss a meal. Completely worth it, of course. The degree to which she opened my mind to music I might not have ever found on my own is profound.

One night, during her show, she had me introduce a block of music. I did what she had taught me, and it was a blast. I started doing that more when I would be off the road. 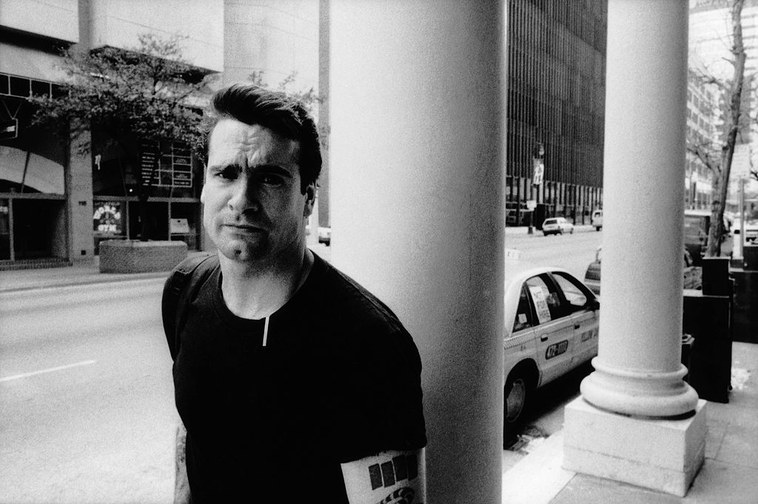 Rollins in 1990. Photo by Michel Linssen/Redferns.

At some point in the mid 1980s, Deirdre’s health began to fail. The rest of her life would be an incredible struggle. In the 1990s, I often helped her with medical expenses. She was extremely hesitant to ask. I could see how hard it was for her and did the best I could to explain that it wasn’t a problem and how glad I was to be able to be there for her.

I remember the last time I saw Deirdre. She was so frail. I put my arms around her very carefully, as the previous time I had, she told me it was too hard. She passed away early in 2001.

I have every letter she ever sent me, every card, tape, everything. Her impact and influence on me is monumental. Now and then, I get an email from someone telling me they like my show on KCRW. I thank them, but it’s just what Deirdre taught me. I’m trying to be like her. A few years ago, I drove by her old apartment. I hadn’t seen it in years. I wasn’t looking to be at her address, I was taking side streets to get to the station and suddenly, there it was. I felt like I had been hit in the stomach. I can’t explain how much I miss her. It’s always there. I am so lucky to have been friends with Deirdre, to learn from her, and to experience her love of life and music.

More: Photos: Inside the angst and ecstasy of LA’s 1980s punk scene