In 1988, while most of the music world was fawning over Morrissey’s solo debut, Deirdre O’Donoghue was all-in on a new record from a lesser-known English band: The Mighty Lemon Drops. After years of support on “SNAP!,” their single “Inside Out” blew up in the U.S., becoming a college rock anthem and MTV staple that launched the band into pop consciousness and amphitheater tours.

The Lemon Drops’ guitarist David Newton and his wife Bekki join us to discuss the strange twists and turns which brought them together, with Deirdre in tow, as the Lemon Drops reached their ascendancy. It’s March 1988. Morrissey has come back from the breakup of the Smiths with his new single, “Suedehead.” It’s a big deal. The Smiths were so immensely popular that it’s hard to imagine an artist with more cultural capital. But that mattered not to Deirdre O’Donoghue.

I just don't buy the Morrissey schtick. Musically, I mean, Vini is fine and Johnny Marr’s fine. But it's not as though there's an enormous depth of musical intrigue going on, in either Smiths songs or this new one from Morrissey, so … There you go. I played it for you. Make of it what you will. — Deirdre O'Donoghue, "SNAP!" #531

Instead, Deirdre was far more excited about the new record from an under-the-radar band she’d been supporting for a long time: The Mighty Lemon Drops. They were getting popular in their native England, but not so much in America yet. That was all about to change in the Spring of 1988, when they blew open the States with their new single, “Inside Out”.

“Inside Out” became an instant college-rock anthem. Within months, the band was touring amphitheatres with Love and Rockets. The song’s video got them into rotation on MTV. And in the midst of all that crazy success, the Mighty Lemon Drops returned to “SNAP!”

David Newton is the Lemon Drops’ guitar player. He lives with his wife Bekki in Los Angeles. Bekki grew up in LA, but ran away to London right after high school. Once in London, she immersed herself in the local music scene there and had a meet-cute with David at a Primal Scream show. David introduced Bekki to Deirdre, and they became lifelong friends based on the music they all adored.

David Newton: The Mighty Lemon Drops formed in Wolverhampton in March 1985. I sent a tape to Dan Treacy from Television Personalities, because he had a record label, and he also ran a club in London. And Dan liked the tape and he invited us down to London to play at his club. And a few weeks later, this amazing review appeared in the NME — New Musical Express — which was, at the time, a national music paper that had been around since the 1950s. And people were writing from the U.S. who'd seen it in the NME. And we got picked up by a major record label. It was around that time, too, that the NME, New Musical Express, put together a cassette compilation album called “C86.” When the cassette came out, it kind of became known as the “C86 Era.” And we didn't really realize what “C86” was gonna be. We didn't realize it would be a defining thing of that era, that period in time of music in the U.K.

We had a lot of record companies who were interested in us. And for the U.S., we signed to Sire Records. And when we finally came to play in the U.S., which was in February/March '87, we got taken over to KCRW and met Deirdre one evening. And the fact that she knew so much about the band and had been playing our record and ... how can I say it in the right way ... it was just amazing, and astonishing almost, to us. We were not expecting to be asked to play a song on her show. And Deirdre surprised us by pulling out an acoustic guitar. [Laughs] And Deirdre said that she really liked the cover of The 13th Floor Elevators’ song, “Splash #1,” that we’d done. It was a bit of a challenge, because we'd never played it together acoustically before, but I think we somewhat pulled it off, thanks to Deirdre’s encouragement and inspiration. 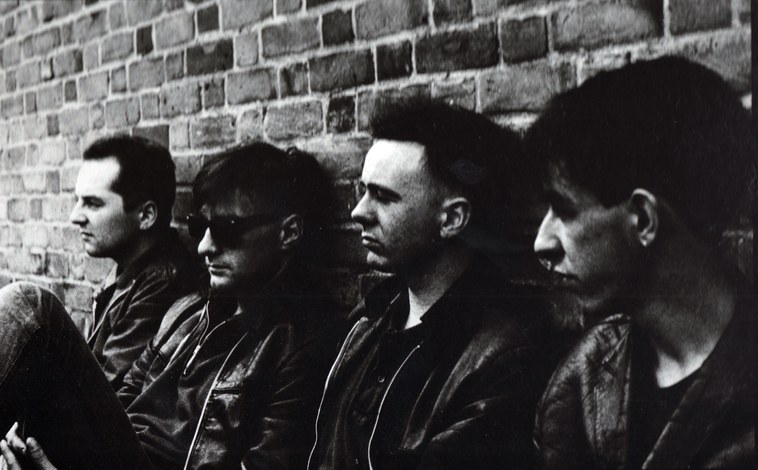 The Mighty Lemon Drops in 1986. Photo courtesy of David Newton.

Bekki Newton: Growing up in LA, there was a lot of rock and hair metal. You’d look at the LA Weekly and all of the ads were Warrant and Ratt and bands like that. And so I discovered more of an underground scene. Everybody I knew, and that was into the same stuff, we were all Anglophiles, so all you wanted to do was go to England and go see bands. So I knew I had to get over to England. I moved there straight out of high school. A week after 18, I moved to London, and it was during the “C86” period.

It was funny, because David and I had these potential chance encounters, I guess meet-cutes, that never quite happened, from London to Wolverhampton and Birmingham. But then in June of 1987, I was at a Primal Scream gig. It was June 26 at ULU, which is actually the place where I saw the Mighty Lemon Drops the year prior. And there's this guy there, and he smiles at me. And he says, “All right?” And I'm like, “...all right?” and smiled back at him. And then a friend of his, or somebody I knew, I'm like, “Do I know him?” And he's like, “Oh, he's in the Mighty Lemon Drops.” But then I'm like, “Wait a second.” My friends had actually written to me that they'd met the Mighty Lemon Drops. And so then I said … you know, I went back to him. I'm like, “I think you may have just met some of my friends in LA.” And when I told David this, he was really confused, because he was trying to figure out if I was from Birmingham or Wolverhampton, or maybe London, and then it turned out I was from LA.

A couple months after we met that summer in '87, we were at a gig at the Town and Country, and Deirdre was there with Marc Geiger, who was David's agent at the time. But he was like, "Oh, yeah, David, remember Deirdre?" And then I met her for the first time. But it turned out we had a lot of similar connections, and that was the night that she told me her theory about that there's only 500 people in the world, and the rest are just a myth. And every time we'd hang out, you'd meet somebody else that knew Deirdre or knew David, and it kept kind of proving her theory right. 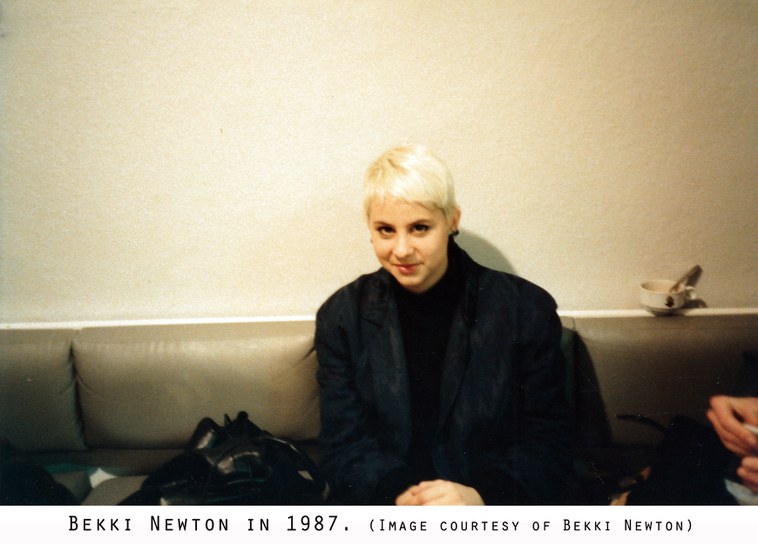 David Newton: After meeting Bekki in the summer of ‘87, we both found ourselves visiting Bekki’s parents in Los Angeles that December. And we went and visited Deirdre and I went on the air. She invited me to go on to the show.

When MTV started showing our video for "Inside Out," a lot of the more commercial alternative stations were playing us. And Deirdre actually really liked that whole album. We did a big tour with the band Love and Rockets, who had just broken through pretty big at that point. In LA, we played at Universal Amphitheatre, which is about five and a half, 6,000 people, or something. Right after that, we went back into Deirdre's show and the full band played live on the program. It was a relief. It was just so kind of natural, and it captures the band as we were. And there was no pressure. She just basically said, "Do what you want to do."

Bekki Newton: So we got married in 1989, and one of the only photos we have from their table, it was her and Michael Meister from Texas Records and some people from the record company. But some of my parents' friends were real big fans of Deirdre. More from her Beatles show, but you didn't really know what she looked like.

She was thought of as a recluse, which I guess she kind of was. ‘Cause obviously she was working at night, so she was preparing for her show so many days a week. But if you’d go into the station and hang out with her there, she would always go to this Chinese restaurant on Ocean afterwards, so we spent many a meal there. She was always coming to London regularly, and we'd see her there too. 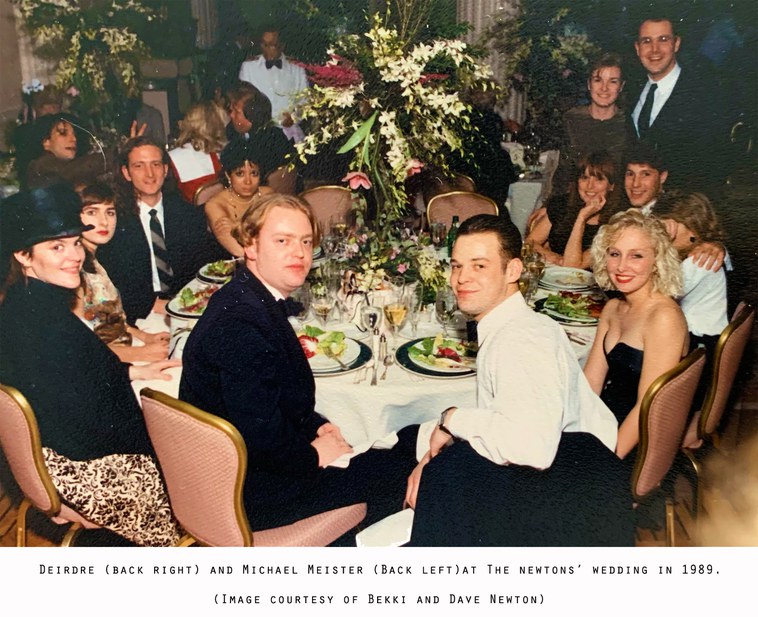 David Newton: Bekki and I moved to London in 1990, and I remember The Church played the Borderline in Soho in Chinatown. And Deirdre was friends with them and was hanging out. And it always involved Chinese restaurants. [Laughs] But I just remember the whole group of us ended up after the show with Deirdre and the Chinese restaurant. Surprise, surprise! [Laughs]

After the Lemon Drops, I played with Blue Aeroplanes for a little while, a band that Deirdre also liked. And Bekki and I moved here in ‘95. And that would have been around the time that Deirdre had started “Snap Judgments.” It wasn't quite the same. We didn’t see her in person as much. We were in touch, and we would write, and I would send her music … but we didn't see her in person for the last year or two before she passed.

When we heard of Deirdre’s passing, we went to her memorial in Santa Monica. And I just remember sitting down and seeing a lot of familiar faces. A guy came up and asked if he could mind if he sat next to us. I said, “Yeah, sure.” And I looked up, and it was Harry Shearer. Henry Rollins did a really great eulogy, and had some great stories and great memories.

Bekki Newton: And it's interesting, because there may have been some famous people and whatnot there. It didn't feel like that. It felt like the same way we described being in the studio with Deirdre when she was on the radio, and we would all kinda talk as friends. In a way, her memorial sort of had that atmosphere as well. It was just like friends just hanging out and talking about their friend that we miss.

One of the things about Deirdre, which David and I share, is that our whole lives have been driven by music. And in a way, music was her spirituality as well. You could tell her passion when she would talk about discovering something new and being excited. And that was her guiding light. And I feel that actually there's a real void not having her and having her voice, turning people on to music that she loved and hoping people would love it as much as she did.