Fanatic! I hope you enjoyed last week’s hangout with the Shepard Fairey. He’s local, we should try to get him to come back in sometime.

Last night, I had a chance to hear the new Chain and the Gang album Experimental Music. We get to start playing that one later in the month and we will.

We get a chance to go further into the new Rice Is Nice Mix Tape on this show and on this night, we will listen to my personal favorite track from it.

The LP version of Devo’s Recombo DNA is really cool and proving to be a worthwhile purchase. Way to go, Delaney at Fur for putting that out.

More new music from the Cravats album. It’s a great one. Here’s some info.

At the time of this writing, the Castle Face Records site says they’re still out of vinyl of the Oh Sees new album Orc. If you can’t find it there, it’s in the shops. A nice bone colored pressing out of the UK is really cool. Hopefully, Castle Face will get more of the record in soon. It’s really good.

Of course, Fanatic, from start to finish, another show, worried over until it begged to leave!

Next week, at the top of our second hour, we have tracks from two upcoming releases on the Upset! The Rhythm label that I am very happy about. A band called Gen Pop and another called The World. Been listening to the World record a few times over the last week and really liking it.

Due to the amount of inquiries, we asked Shepard Fairey’s team to send us a press release and image about his November event. We will post this again closer to the launch.

DAMAGED
“Damaged” is the forthcoming solo art exhibition from artist and provocateur Shepard Fairey. A nimble and prolific street artist, a skilled graphic artist, and a multifaceted fine artist, “Damaged” is the artist’s largest-ever solo show in Los Angeles.

Referencing Black Flag’s 1981 album “Damaged,” but inspired by a critical look at social issues that are currently in a state of crisis, Fairey’s latest body of work serves as a reflection on the damaged state of politics, media, human rights, the global approach to the environment, and more.

The exhibition opens in Los Angeles on November 11, 2017, and will showcase never-before-seen paintings, large scale sculptures, installations, etchings, retired stencils, a printed newspaper titled “The Damaged Times,” prints on wood and metal, and a display of various do-it-yourself tools of empowerment. 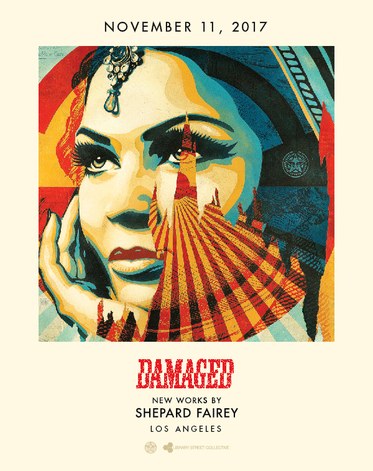