Why Was A Prominent Muslim Musician Gunned Down In Pakistan? 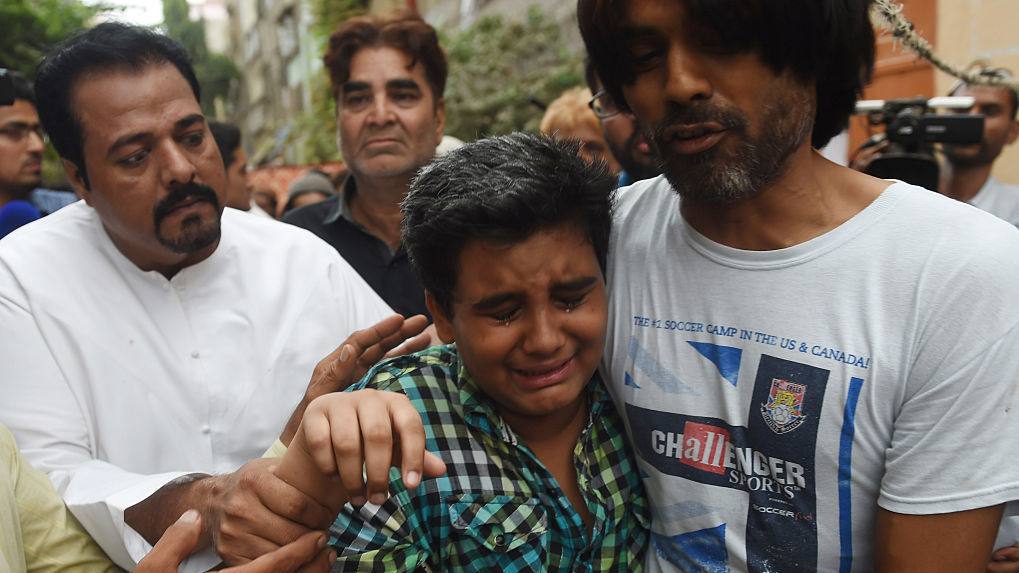 One of Pakistan's best-known singers, Amjad Sabri, was gunned down Wednesday in the city of Karachi, in what police are calling a targeted killing.

The attack occurred when the 45-year-old Sabri was on his way to a television station, where he was scheduled to give a performance to mark the Muslim holy month of Ramadan.

The TTP Hakimullah Mehsud group — aka the Pakistani Taliban — has claimed responsibility for Sabri's death, saying that they carried out the assassination "for blasphemy." If members of the Pakistani Taliban did carry out Sabri's assassination, it would be the latest in a string of high-profile attacks; the group has also been accused of being the force behind the assassination of Pakistan's former Prime Minister, Benazir Bhutto, in 2007, as well as the infamous shooting of schoolgirl Malala Yousafzai in 2012.

According to reports in the Pakistani press, two men riding a motorcycle fired shots at Sabri's car. The singer was shot five times, including in the head. On Thursday, thousands of people gathered in Karachi, to throw rose petals at the ambulance that contained the singer's coffin and to cluster near his home.

There are also reports that Amjad Sabri's brother was in the car with him, and was wounded in the attack.

The richly baritoned Sabri was part of one of South Asia's most celebrated singing families. His late father, Ghulam Farid Sabri, and late uncle, Maqbool Sabri, were known together as The Sabri Brothers. The family specializes in the art of qawwali — an important Muslim devotional tradition. Like his ancestors, Amjad Sabri spent his life singing praises to God and the Prophet Muhammad.

Qawwali is a tradition that has lasted about 700 years in South Asia — home to about a third of the world's Muslim population — going from Persia into what is now India and Pakistan. It is, for its performers and audiences, a conduit for experiencing the divine.

In South Asia, qawwali is also one of the most popular and relatable expressions of Islam and of Sufism — the hugely diverse, mystical branch of Islam that emphasizes having a personal connection to God, as well as embracing tolerance, peace and equality.

In many areas of the world, local forms of Sufism incorporate other religious philosophies and practices as well as regional cultural references. For example, Sufi shrines in South Asia regularly draw not just Muslim devotees, but Hindus, Christians, Sikhs and others — which has in recent years made them a particular target for terrorist violence. Some qawwali songs explicitly reference religious pluralism and tolerance. That's worlds away from the ideological goals of the TTP and their allies.

As journalist Murtaza Hussain said in a piece by Haroon Moghul published yesterday by the Washington Post, qawwali was "distinctively Pakistani and was our own unique expression of Islam. That's why this killing really strikes at the heart and soul of Pakistan."

Some qawwali songs praise God directly, or the prophet Muhammad, or Ali (who became the first imam of the Shiite branch of Islam), or one of the Sufi saints. Other songs describe the poet's longing for God — very often expressed in what seems, on the surface, to be a secular love song.

Qawwali draws upon North Indian classical music — a musical style that evolved within an expressly Hindu context — but is also uniquely its own, with call-and-response choruses as well as handclaps and drumbeats that are meant to evoke the human heartbeat. The songs build slowly in speed and intensity, swelling up to ecstatic heights. Listeners are swept up in that lyrical and musical potency, dancing, clapping and singing along. Qawwali is very much a communal experience that can last for hours.

Historically, the qawwali tradition is passed down by male family members from one generation to the next; Amjad Sabri was the only one among his siblings to lead his family's party, or group.

Mindful of that legacy, Sabri sought to preserve his family's traditions in his work. He was particularly renowned for performing a song associated with his father and uncle called "Bhar Do Jholi Meri" ("Fill My Bag"):

But his elders were also well-known for experimenting and updating tradition. In the mid-1990s, The Sabri Brothers released "Ya Mustapha," on the American label Xenophile, which paired this qawwali party's soulful singing with saxophones. The young Amjad Sabri sings in the chorus of this recording.

Sabri also reached out to audiences through the big screen. He appeared in the 2008 Bollywood drama Halla Bol ("Raise Your Voice").

The Sabri family's own history in qawwali goes back centuries. The family claims (though it has been contested) that they are descended from Mian Tansen, a legendary court musician in the service of the Mughal emperor Akbar the Great, who spread his empire across almost all of the Indian subcontinent in the late 16th century, and whose patronage of the arts and literature were at the heart of a unique Mughal culture.

Great qawwals, or singers who specialize in qawwali, are beloved across the South Asian subcontinent and across the globe by fans from all kinds of religious and secular backgrounds. Like the internationally known titan of qawwali, Nusrat Fateh Ali Khan, the Sabri Brothers recorded for Peter Gabriel's Real World label. (I've been listening to and writing about qawwali, and interviewing prominent qawwals, for more than two decades; the Sabri family has long been a fixture in my own insatiable qawwali obsession.)

In 2014, Amjad Sabri was named in a blasphemy case in Pakistan, after he had gone on a morning talk show to sing; the qawwali he had chosen to perform reportedly referenced members of the prophet Muhammad's family. The television channel and the show's anchors, along with the song's lyricist, were also named in the suit.

Asghari Begum, Amjad Sabri's mother, told Al Jazeera that approximately six months ago, three men burst open the front door of the family's residence, then left after realizing that the singer was not at home.

According to the Pakistani newspaper Dawn, Sabri leaves behind a widow and five children; his oldest boy is 12 years old. Pakistani Prime Minister Nawaz Sharif announced on Thursday that the government would grant Sabri's immediate family 10 million rupees (about $95,000) of financial support, along with covering the children's educational expenses. In his statement, Sharif said that Sabri's death came "at the hands of coward terrorists."

Sabri's assassination has apparently left other Muslim artists in Pakistan vulnerable. On Thursday, Farhan Ali Waris — who specializes in Shiite religious recitations and was a friend of Amjad Sabri — says that he was shot at in a nearby neighborhood, a few hours after Sabri was attacked.

And among the outpourings of grief and tributes to Amjad Sabri online was this Facebook note from the brothers Mehr Ali and Sher Ali, another great qawwali brother duo: "Hands are shivering."