A replica of the Apollo command module outside the Columbia Memorial Space Center in Downey. Photo by Amy Ta.

Fifty years ago, Apollo 11 launched from the Kennedy Space Center on Merritt Island, Florida. However, the command module that brought those astronauts to the moon and back was built in Downey, California. Today, a replica sits outside the Columbia Memorial Space Center.

“The final construction was in Building 290, and it's now a 24-Hour Fitness,” said Benjamin Dickow, who directs the center. “So if you walk in there and work out, you'll know that the ship that went to the moon was built on that property.” 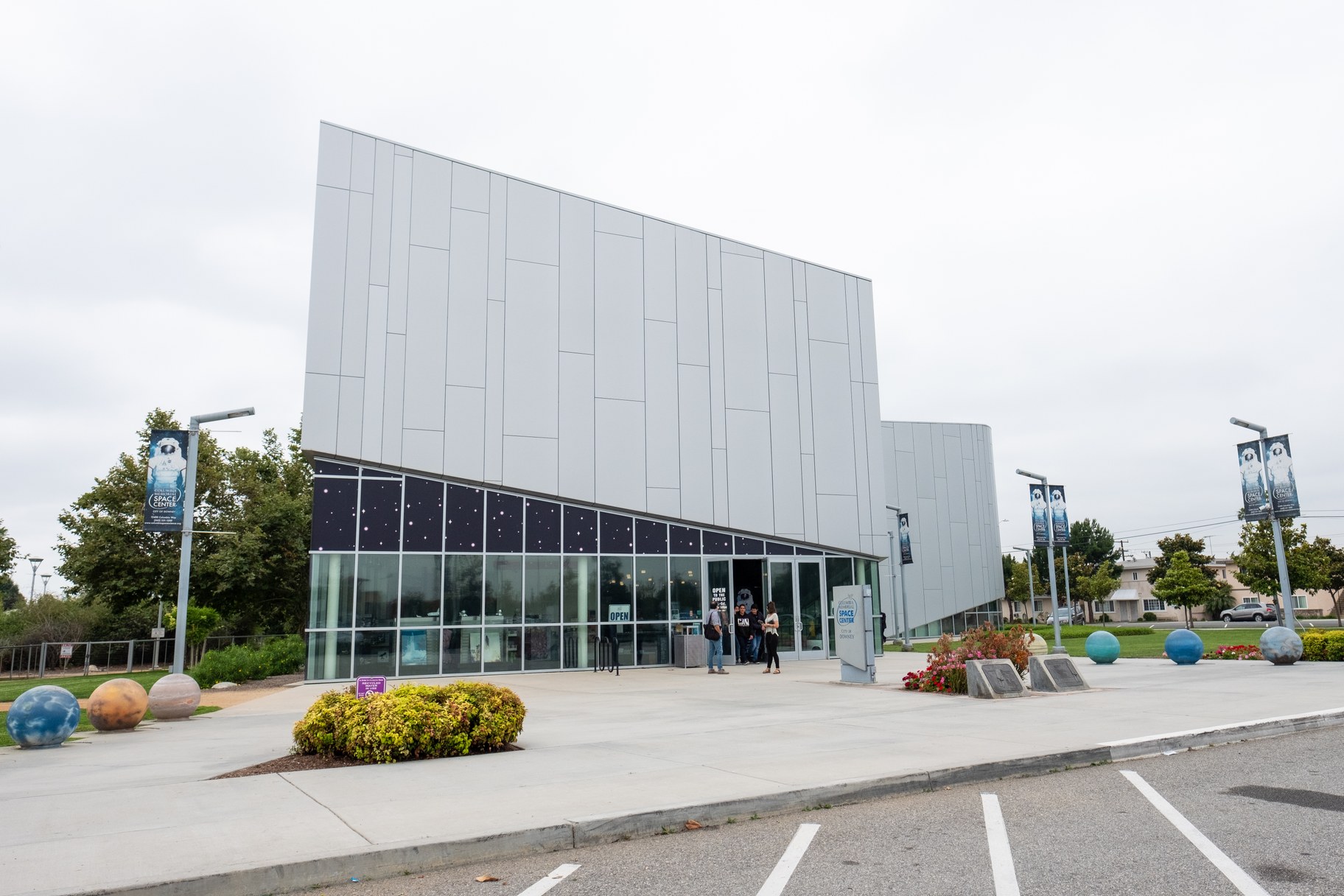 The exterior of the Columbia Memorial Space Center. Photo by Amy Ta. 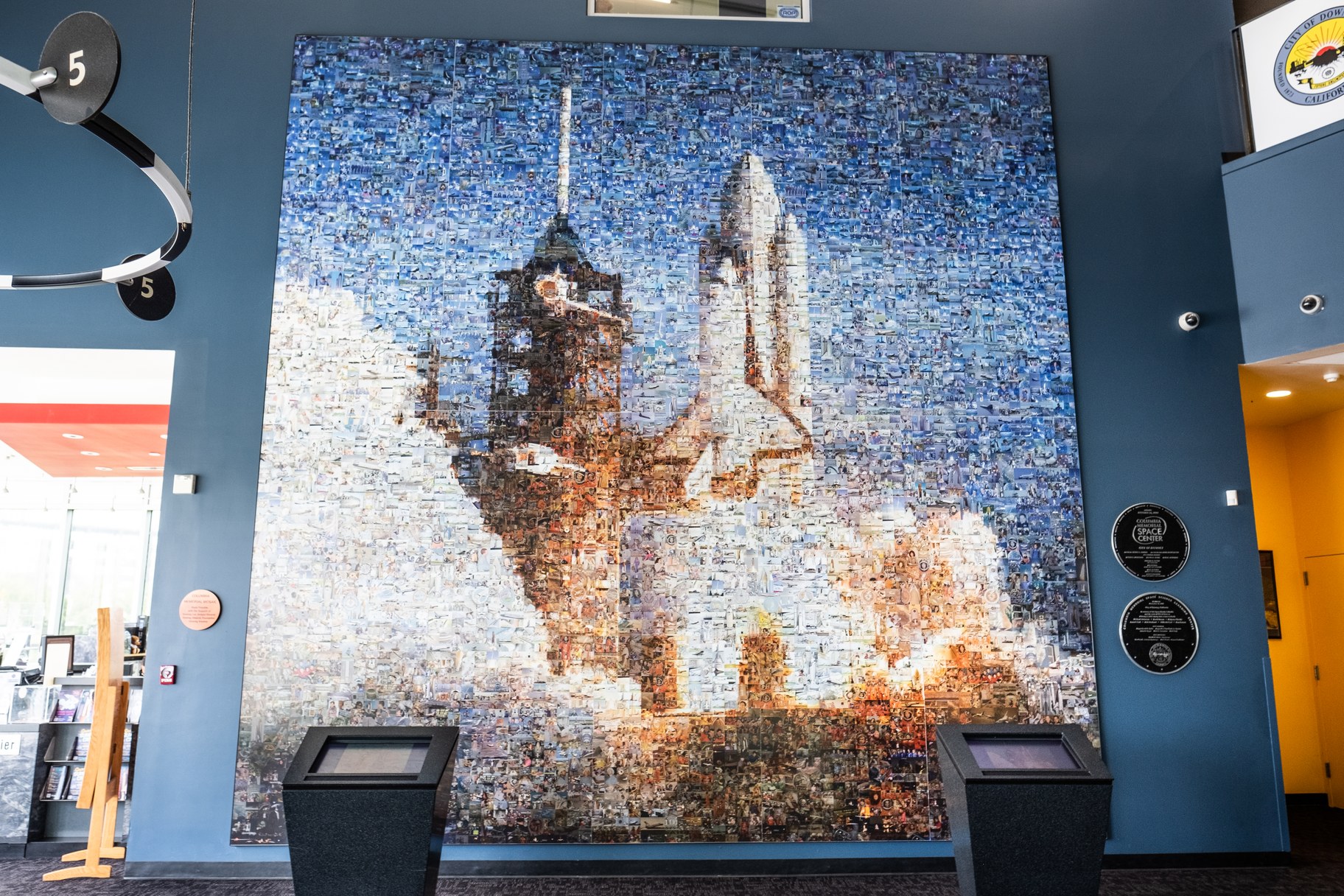 A photomosaic mural in the lobby of the Columbia Memorial Space Center. Photo by Amy Ta.

A history of aeronautics in Downey

Before the space race of the 1960s, aeronautics workers built aircraft in Downey. The small city played a key role in equipping Allied forces with planes and parts during World War II.

In 1960, the company won the bid from NASA to design and construct the command and service module (CSM) for the Apollo program. Functioning as a mothership, the CSM carried a crew of astronauts and the second Apollo spacecraft, the “lunar module,” to lunar orbit, and brought the astronauts back to Earth. 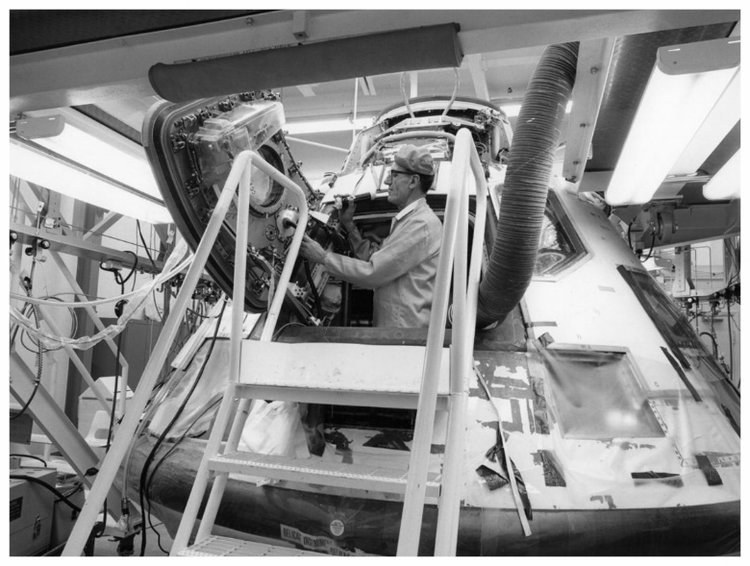 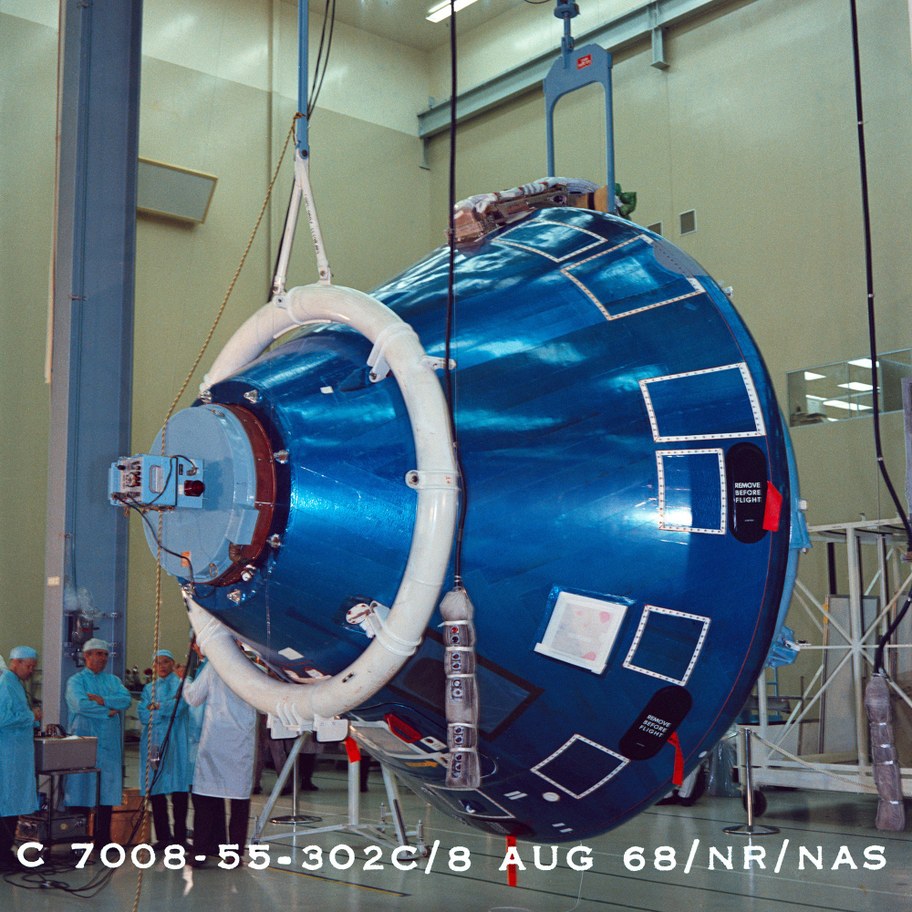 Constructing the command and service module in Downey in the 1960s. Photo courtesy of Columbia Memorial Space Center.

Once NAA won the bid, its workforce ballooned and 35,000 workers descended on the small city.

“A huge majority were just blue collar technicians who could build stuff with their hands,” said Dickow. “This facility was bigger than Disneyland. 24/7, three shifts a day, tons of people and activity.” 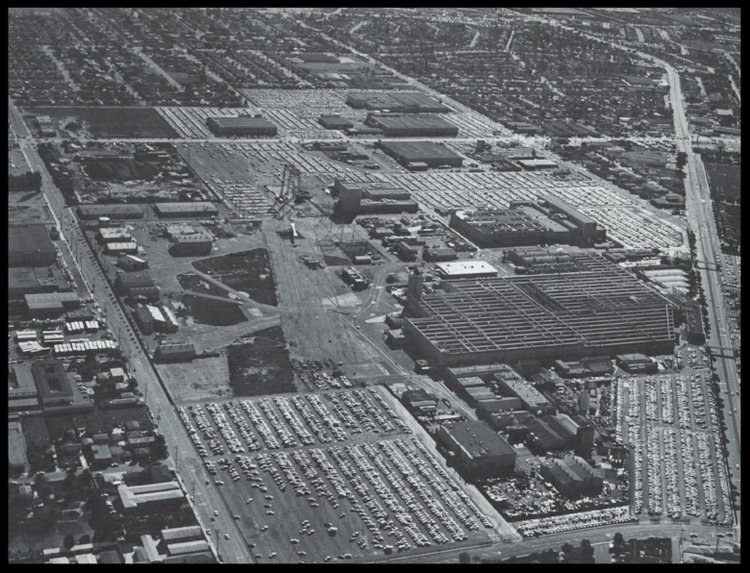 The NAA facility was 225 acres in the 1960s. Photo courtesy of Columbia Memorial Space Center.

One of those workers was Charles H. Lowry, who designed the parachute system that, at the tail end of the mission, guided the astronauts safely back to Earth.

“All of the designers on Apollo were sitting on the edge of their chairs, and they were so relieved when we get down [to the moon],” remembered Lowrey. “But of course in my case, the game has just started. I have to get them home.” 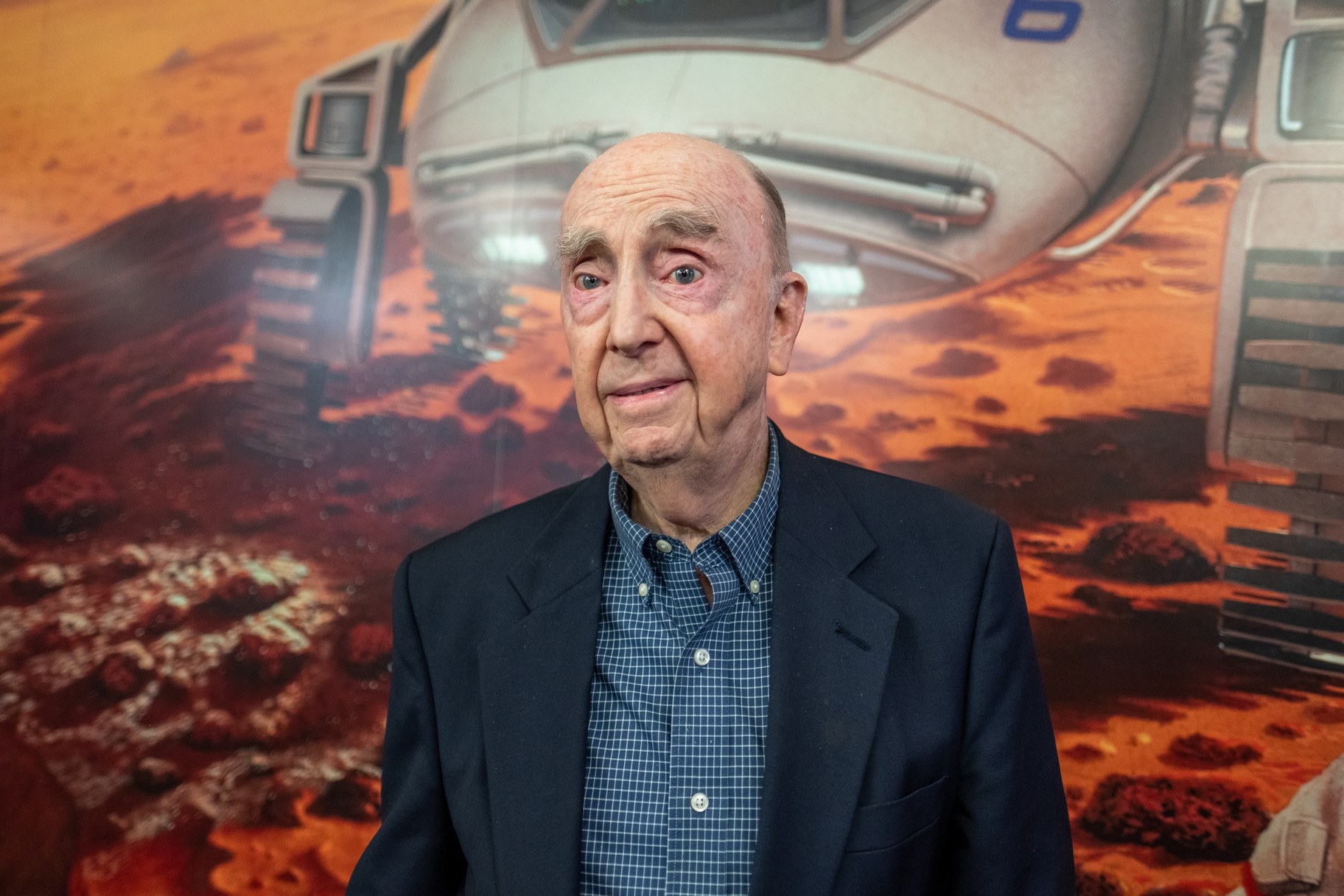 He’s 87 now, but can still remember the relief he felt when those chutes opened and the capsule floated down into the Pacific Ocean, 900 miles southwest of Hawaii. 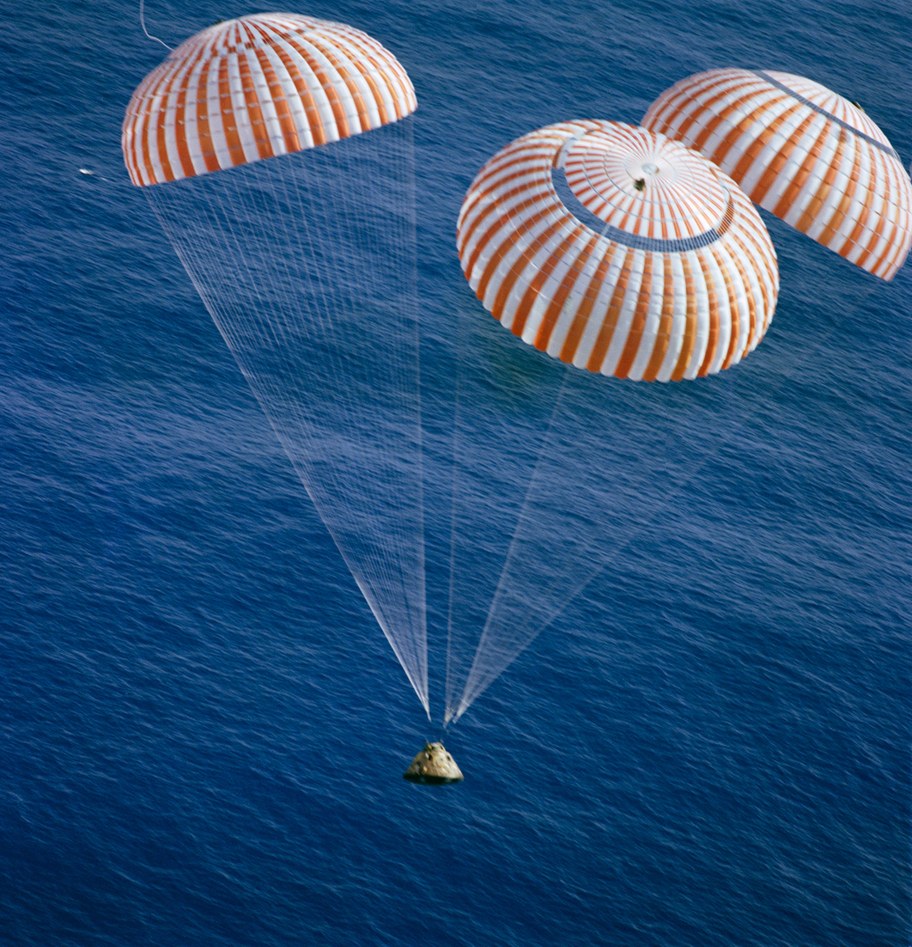 “When the main chutes came out at about 10,000 feet, that's when we all say we're home,” said Lowry. “And the astronauts go nuts when they look out the window and see the most beautiful parachutes above them, and you get all these superlatives like ‘Beautiful! Gorgeous! Amazing,’ and all the crews were just elated. And then it's a soft ride down to the water.”

Another engineer, Nathaniel LeVert, shares that pride. He was working on an early satellite system for Douglas Aircraft in Southern California, when Downey called.

“I would have worked for nothing because I was just so fascinated with what they had me doing,” he said. 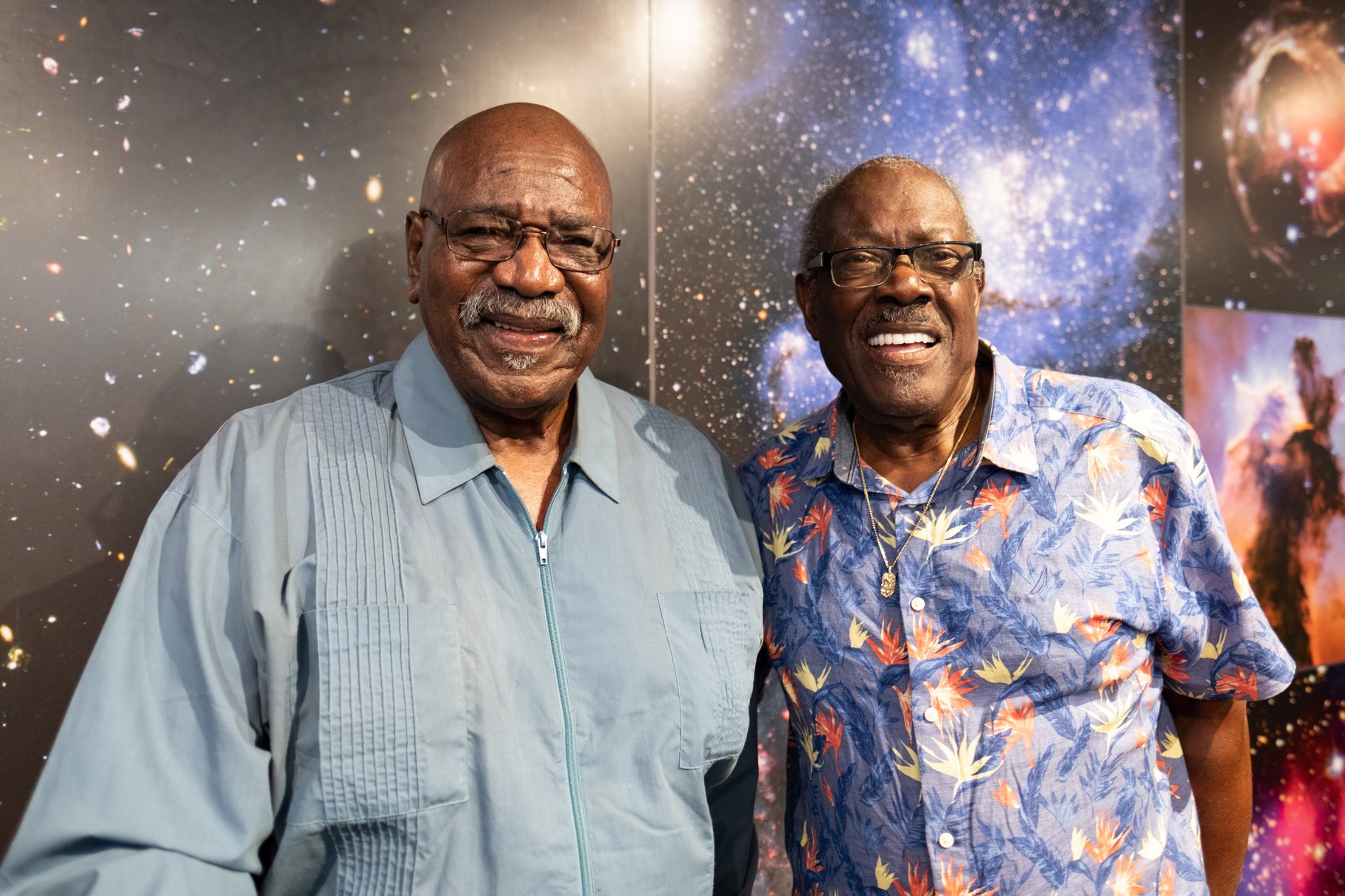 LeVert was tasked with designing a system to pressurize the liquid oxygen tank, which allows the main engines to combust in oxygenless space.

“We did a lot of testing, and finally we will get the results we wanted,” he said. “I couldn't sleep at night when I was thinking that they're going to fly.”

On race and discrimination

Nathaniel LeVert is now 85. At the Columbia Space Center, he recently showed KCRW the designs and calculations that he hand-drew and tabulated in the 1960s during his time in the Apollo mission. 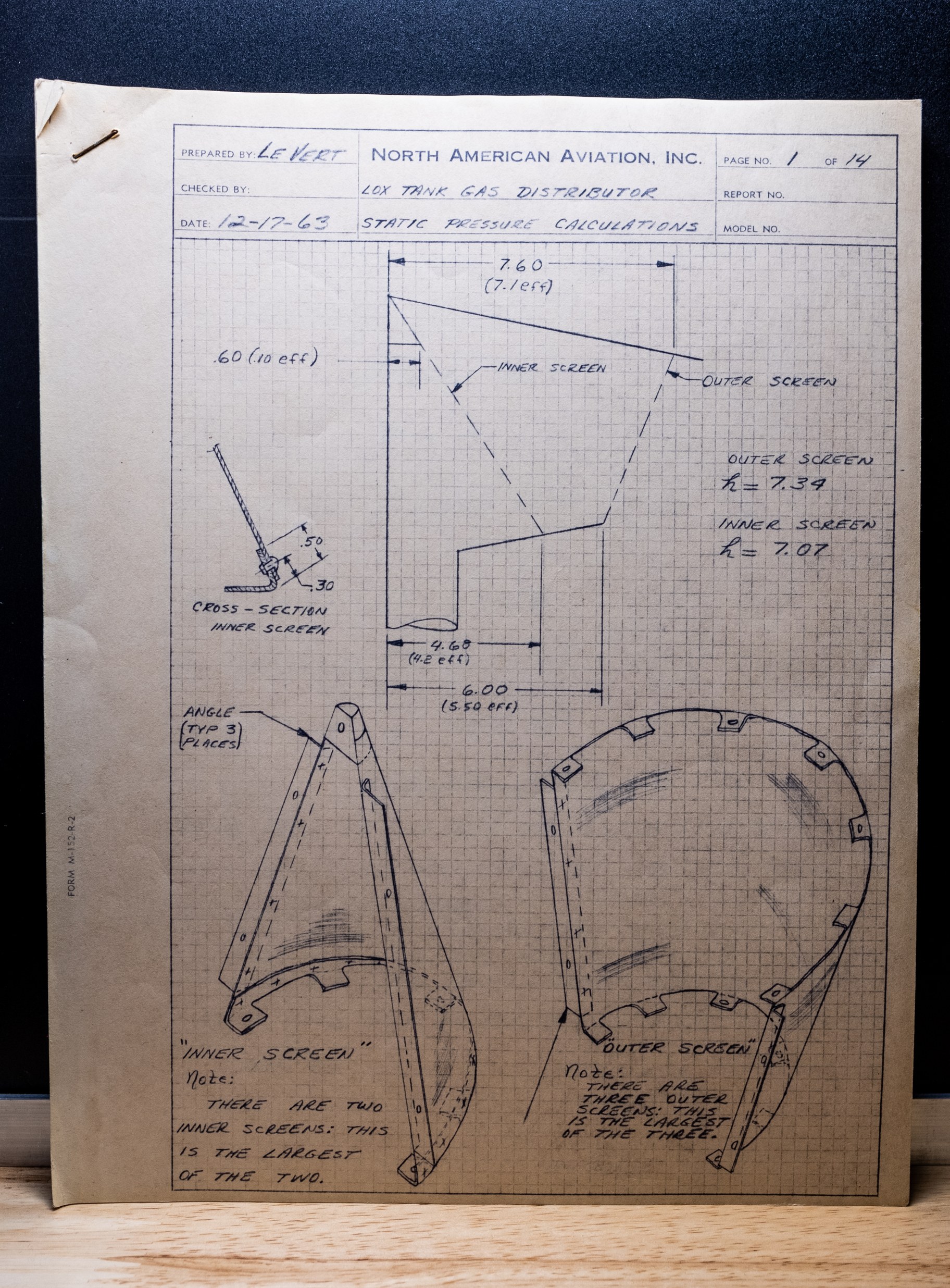 Sitting next to LeVert was his colleague and friend, 84-year-old Shelby Jacobs, who developed the camera systems that captured amazing images during the Apollo missions, like the famous “Blue Marble” image that provided definite proof that the Earth was round. It also captured one of the most repeated images in space history: the separation between the first and second stages of the Apollo 6 spacecraft in 1968. 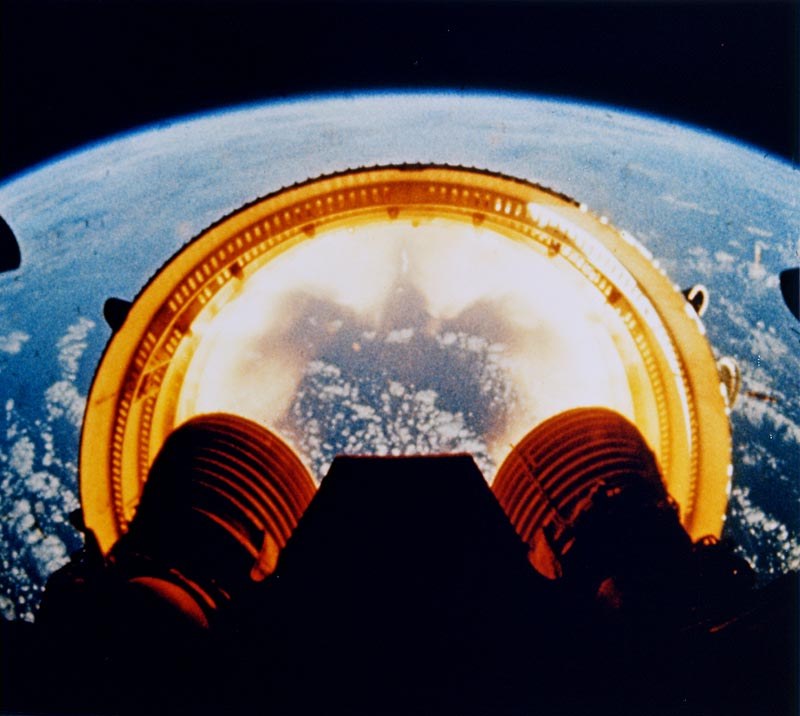 The interstage between the S-IC first stage and S-II second stage falling away during the Apollo 6 flight. Photo courtesy of NASA.

While Jacobs and LeVert said they are proud of everything they accomplished in the modern space program, it wasn’t easy for them in the workplace. It was the 1960s, and they’re both African American.

“It was a hostile environment for us,” said Jacobs. “My entire career, I never had a job that had been preceded by a 'black' before. And if I moved on, I was replaced by a white person… There was a certain resistance to us because we were taking jobs that were previously allocated for white males.”

He said women had to deal with similar discrimination issues.

At that time, LeVert and Jacobs couldn’t even live in Downey, they said. Most black employees lived in Watts

“For the same reason segregation happened in the South, it was here too,” said Jacobs. “We could not live where we wanted to live. Our segregation was what I refer to as ‘de facto.’ There was no law that said you couldn't do these things, but it was just kind of known. Even though we went to the same bathroom, we couldn't live in Downey.”

Today, Jacobs and LeVert are celebrated as two of many heroes of the Apollo program in Downey.

What do they think NASA should do next?

“Personally I don't think we need to go back to the moon,” said LeVert. “I think there has got to be another place that's supporting life. I just believe that.”

The Columbia Memorial Space Center is hosting several events this week to celebrate the 50th anniversary of Apollo 11.

Fifty years ago, Apollo 11 launched from the Kennedy Space Center on Merritt Island, Florida. However, the command module that brought those astronauts to the moon and back...

Major aeronautics companies gearing up for World War II based their factories in Southern California, so it was natural for them to go into space.

Several cities in Orange County have decided to change the rules to limit what some councilmembers call “grandstanding,” putting issues you think are important on the agenda...