How one Carpinteria family survived coronavirus and 62 days of separation Olivia and Jose Moctezuma with two of their children. Photo by Kathryn Barnes/KCRW.

When Olivia Moctezuma went to the emergency room on March 19, she didn’t think she had COVID-19. At that point, there had only been a handful of cases in Santa Barbara County and no reported hospitalizations.

All she knew was that she was gasping for air and needed help breathing.

Since she was exhibiting coronavirus symptoms, the doctors at Cottage Hospital put her in an airborne infectious isolation room, and told her husband Jose that he couldn’t come in.

She wouldn’t see him and her family for 62 days. For 23 of those days, she was unconscious on a ventilator.

“I texted my husband on March 23 at 2 a.m.,” said Moctezuma. “I told him that I was very sorry, but it was so much pain, and I didn't have any more energy anymore, so they were going to intubate me. And that's the last thing I remember.” 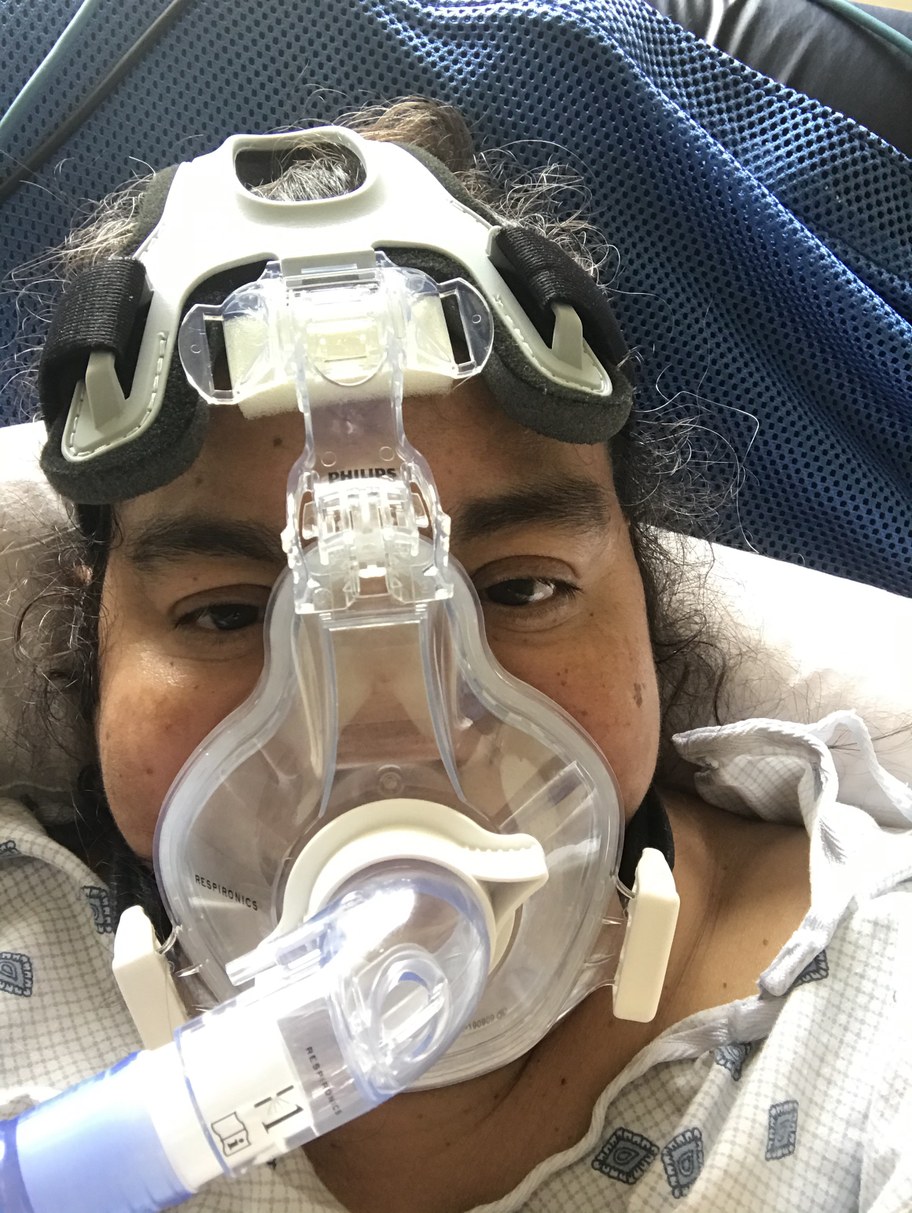 Olivia Moctezuma in the ICU, a day before she was put on a ventilator. Photo courtesy of Moctezuma.

Moctezuma is 52 years old and lives in Carpinteria with her husband, four kids, and her parents. She immigrated to the U.S. from Mexico when she was a teenager. She works as a property manager at a low-income housing complex for farmworkers, where she and her family live.

While there’s no way of knowing for sure, she suspects she contracted the virus at the DMV in Santa Paula in early March, before most indoor businesses shut down and people were asked to wear masks.

She said that while her time in the hospital was terrible, it was in some ways worse for her family, who weren’t sure if she’d get better.

Jose Moctezuma started developing a fever about the same time his wife got admitted into the hospital.

He sent the kids to stay with their big sister in her home, so they wouldn’t get sick. But their son came down with a fever too, so Jose brought him back to the house. He told his inlaws to stay in their bedroom and avoid him and his son.

“I didn't have any energy,” said Jose Moctezuma. “Since I couldn't eat anything, I wanted to kind of throw up, but I only had pain in my stomach. It was like somebody was hitting me in my stomach. I was just laying down in the bed and checking on my son. That's when I got the text from Olivia. I said, ‘I love you. I hope you get better soon.’ And that's it. That's when all hell broke loose.”

Jose and his son tested positive for coronavirus.

They slowly recovered at home, continued quarantining, and hoped Olivia would wake up.

“Sometimes it was seven, eight o'clock at night and I didn't receive any phone calls,” he said. “So I had to call the nurse station to get an update. Most of the time it was, ‘She's not getting better, but she's not getting worse.’”

After three weeks, the doctors told Jose they needed to take her off the ventilator, but didn’t know if she’d be able to breathe on her own.

“The longer someone is on a ventilator, the more concerning it is with regards to their prognosis,” said Dr. Lynn Fitzgibbons, an infectious disease specialist at Cottage Hospital.

The doctors prepared Jose for the worst. But when they took Olivia off the sedatives and took the tube out, she started breathing on her own.

Still unable to see her family in person due to the hospital’s no-visitors policy, Olivia began slowly piecing together what happened to her, and separating reality from dreams.

She dreamt that she and Jose had another baby but couldn’t remember the baby’s name. When she had a video call with one of her daughters for the first time, she asked her to find the birth certificate.

“I said, ‘Mi hija, I just can't remember the name of the baby. Can you please look at the birth certificate?’ And she's like, ‘Yes, mom. Don't worry, I'll let you know.’” 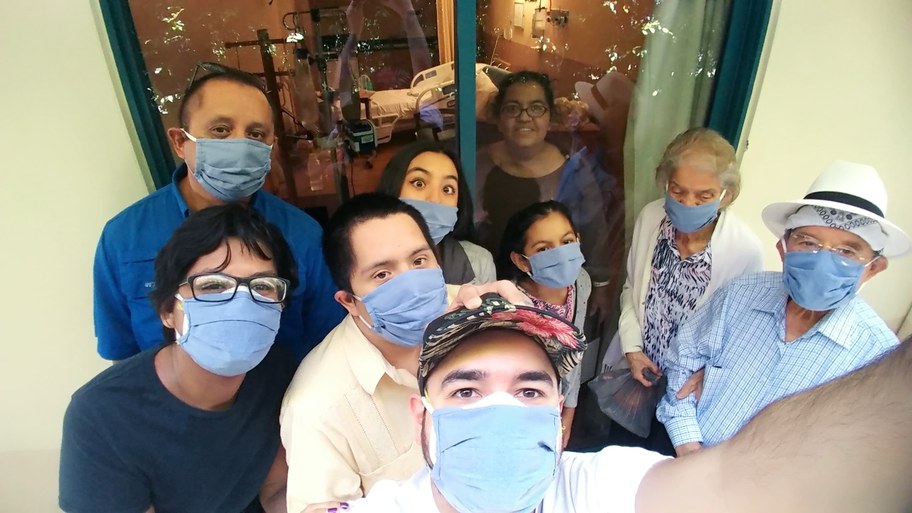 Olivia Moctezuma’s family visits her through a window at the hospital. Photo courtesy of Moctezuma.

On May 1, Olivia was discharged from the hospital to the neighboring rehabilitation center.

Rolling through the hallway in a wheelchair, a long line of doctors and nurses cheer her on. She said they told her she was their first COVID patient at Cottage Hospital to get discharged from the ICU.

She was discharged from rehab on May 20, returning home to Carpinteria and getting to hug her family after two months. 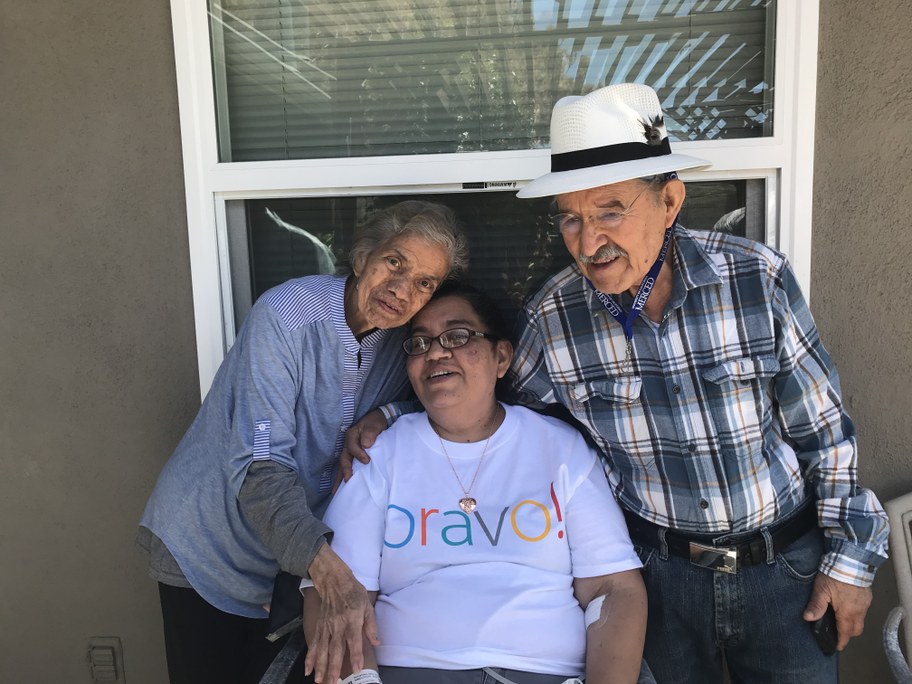 Olivia Moctezuma with her parents the day she was able to return home. Photo courtesy of Moctezuma.

Olivia can now shower, get dressed, and do other daily activities on her own, but her doctors say she still shouldn’t drive.

When she first got home, she would get winded after walking less than a block. Now she said she can walk about two miles.

She said that she luckily doesn’t seem to have lasting cognitive impairment.

“I know that on many occasions, it's hard to believe it because we're not going through it,” she said. “But it does happen, and the reason why I'm still here, I hope, is to help other families not go through the same thing as we did.”

Her word of advice: wear a mask. She still wears hers out of respect for others, and because she’s not 100% certain she can’t contract the virus again.

Surviving COVID-19 and 23 days on a ventilator

How one Carpinteria family survived coronavirus and 62 days of separation

Olivia Moctezuma thinks she contracted COVID-19 at the Santa Paula DMV in early March. Shortly after, she was hospitalized, on a ventilator for 23 days, and unable to see...

“It's so cool to see how hard the women in this league have worked to get to this point. ... The season is just beginning, and it's going to be really amazing to see how it...