“I do think people really need to sit in the dark with their friends and strangers, and watch a flickering screen. And they need the human interaction that comes with a video store. I think more than ever, we're going to crave that,” says Maggie Mackay, Executive Director of Vidiots. Photo by Angel Carreras/KCRW.

After closing in 2017, Vidiots, the much-loved nonprofit video store formerly based in Santa Monica, will relaunch in Northeast LA early next year.

The new store will take over an 11,000 square foot community space. The revamp will include the restoration of Eagle Rock’s 100-year-old Eagle Theatre, and the additions of a 50,000 title video library plus a cafe.

Visitors can see a movie, walk straight into a video store, and get a recommendation based on what they just saw.

There’s still fundraising and construction to be had, but Maggie Mackay, executive director of Vidiots, is relieved.

The space was set to open last year for the nonprofit’s 35th anniversary — until the COVID-19 pandemic closed down businesses.

Now with more people getting vaccinated against coronavirus and LA has entered the orange tier of Gov. Gavin Newsom’s reopening plan, Mackay is looking forward to what people will want after a year in quarantine. Namely, humanity.

“My general instincts about human beings is that we're social animals,” Mackay says. “I do think people really need to sit in the dark with their friends and strangers, and watch a flickering screen. And they need the human interaction that comes with a video store. I think more than ever, we're going to crave that.”

That communal interaction helped make the video store a part of the city’s social fabric for decades. 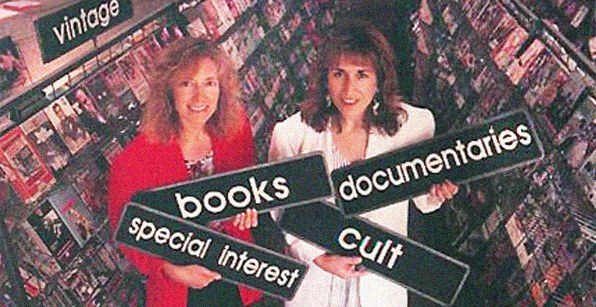 Vidiots was founded in 1985 by Patty Polinger and Cathy Tauber.

Their storefront on Pico Boulevard was only a few thousand square feet, but it had tightly-packed aisles brimming with DVDs, Blu-rays, and VHS tapes.

Titles there were esoteric, and hard to find. Getting recommended gems and visiting this labyrinth of movies was a must for one of Vidiots’ present-day financial backers, comedian Paul Scheer.

“I went to the original Vidiots like probably most people in LA, as a pilgrimage,” Scheer says. “You had to go to this amazing video store. I didn't live on that side of town, so it would make no sense, I would basically never be able to return a tape. I just went there to gawk. It was a museum of film.”

With Polinger and Tauber’s thoughtful curation and programming,

“Isn't it a wonderful idea to think about a place, and not have to worry about whether or not you feel safe there? It really is something that you shouldn't have to think about when you want to go be entertained and find community.”

But in the late 2010s, LA rent prices went up, traffic got worse, and consumer habits changed.

Streaming and video on demand made it less attractive to spend hours on the I-10 freeway to go rent a cult classic than it would be to instantly stream a new movie at home.

“People drove from Santa Barbara sometimes to get something, and then it became impossible to drive east after 2 p.m.,” Pollinger says. “That definitely affected our business. Our circle of people just got smaller and smaller. "

Vidiots turned into a nonprofit to keep afloat, but it wasn’t enough. They closed the physical Santa Monica location in 2017.

A rendering of what the Eagle Theatre will look like as Vidiots. Photo courtesy of Vidiots.

Mackay liked the Northeast LA location for obvious reasons.  What cinephile wouldn’t want to make a home in a classic theater space? But she fell in love with the community too.

“Every day that I'm here at the theater, someone passes by and says, ‘Oh, I saw a movie there in 1977, or 1958, or whatever year it is,’” Mackay says. “They have very distinct memories of that. And now the fact that these two things are coming together is very meaningful.”

Preserving that film culture and experience is of utmost importance to Mackay and Vidiots, and as Mackay puts it, LA at large.

“I have increasing concerns about what Los Angeles is going to look like after [the pandemic]. We don't want to get through this and look around and see that Los Angeles is a parking lot scattered with some grocery stores. We need art spaces. We’re the capital of the film world, and we need to see that reflected in our neighborhoods again.”