Venice Beach is the latest flashpoint in LA’s homelessness crisis. During the pandemic, hundreds of unhoused people set up camp along the boardwalk. Nearby residents and business owners have been angry and concerned about public safety. Now there’s extra pressure as pandemic restrictions are lifted and tourists are back.

“On a daily basis, we'll have homeless people walk into the bar trying to use our restrooms, causing problems in the bar,” says Mark Van Gessel, who owns Hinano Cafe near the south end of the boardwalk. “The customers feel so uncomfortable, they decide to leave and go somewhere else.” 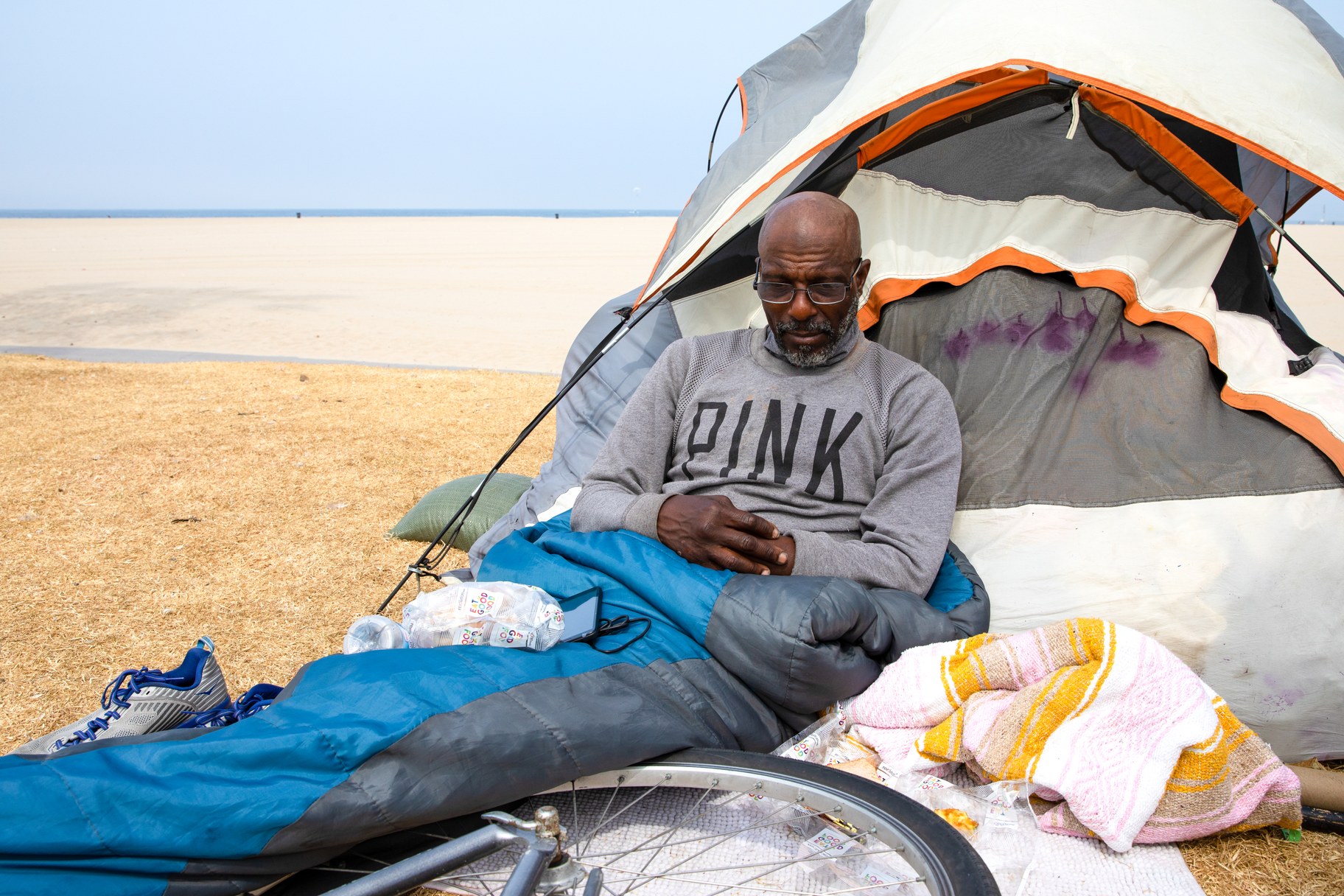 Paul McCrory, an unhoused man, rests on his tent as the morning begins. June 29, 2021. Photo by Zaydee Sanchez for KCRW. 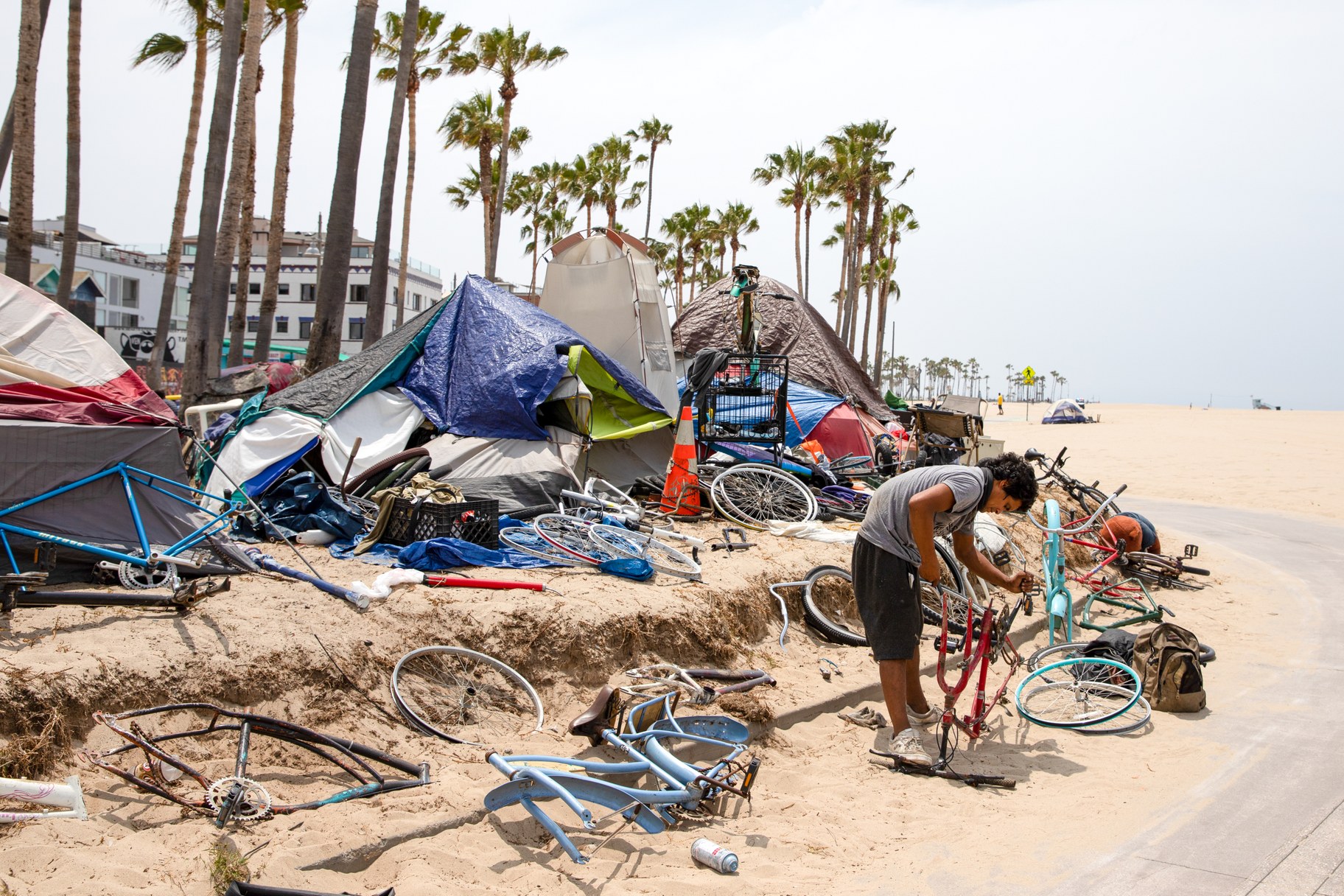 An unhoused man repairs his bike along the Venice bike path. June 29, 2021. Photo by Zaydee Sanchez for KCRW.

These complaints are spurring politicians to take action. This week, LA City Councilmember Mike Bonin started a plan to clear the area of tents and move approximately 200 living by the boardwalk to hotels over the next month and a half, and then to permanent housing.

LA County Sheriff Alex Villanueva has also vowed to remove encampments from the boardwalk by July 4.

LA Mayor Eric Garcetti visited the boardwalk on Tuesday. He met with the head of the St. Joseph Center, which is leading the outreach to house people. He also took a drive with LAPD officers who briefed him on public safety issues, and got yelled at by passersby while walking the boardwalk.

“People have got to know what I'm doing,” he says. “They’ve got to see the mayor out here doing that work. But I'm not interested in yelling about this and pointing fingers. We’ve got to solve it. That's why I'm here.” 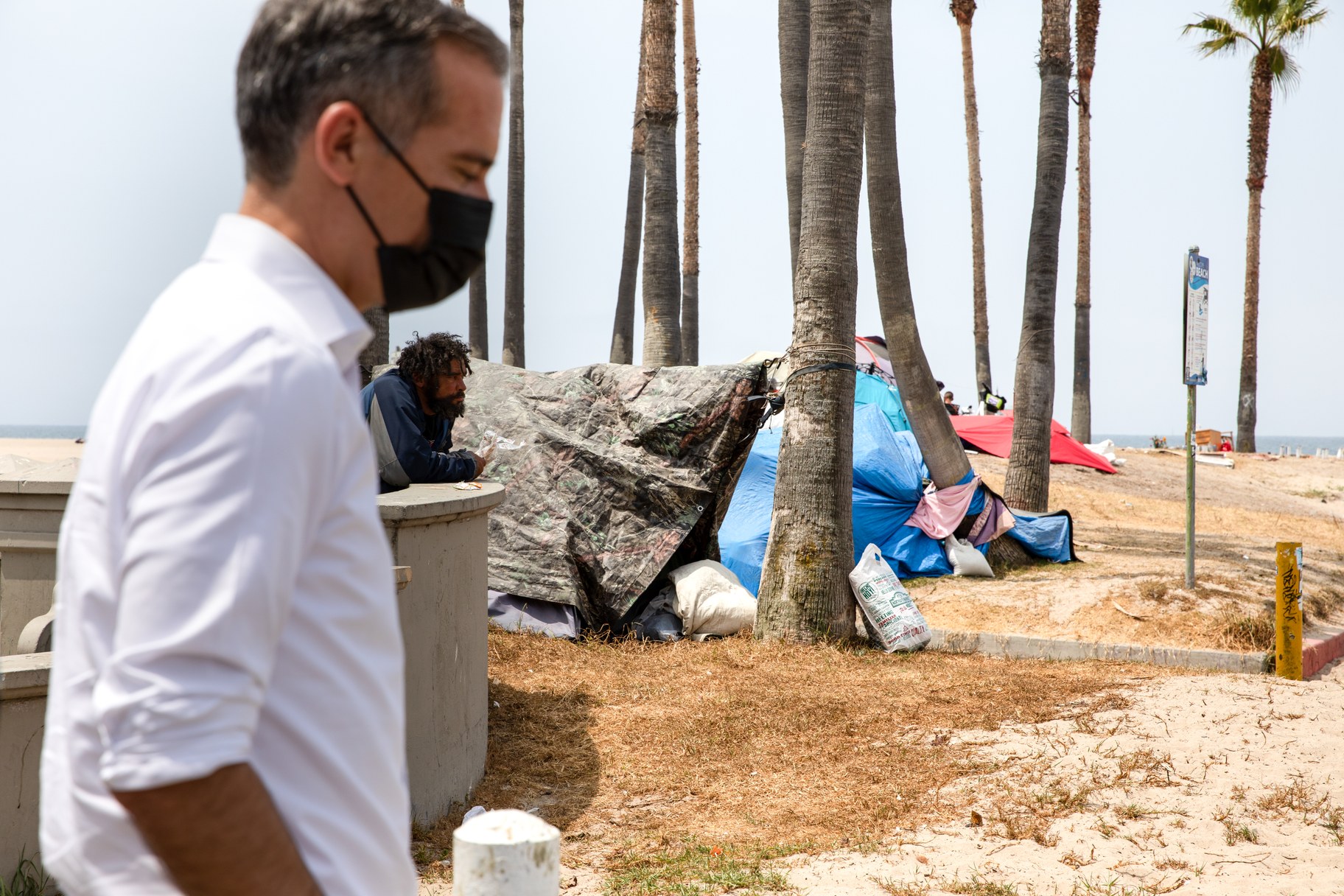 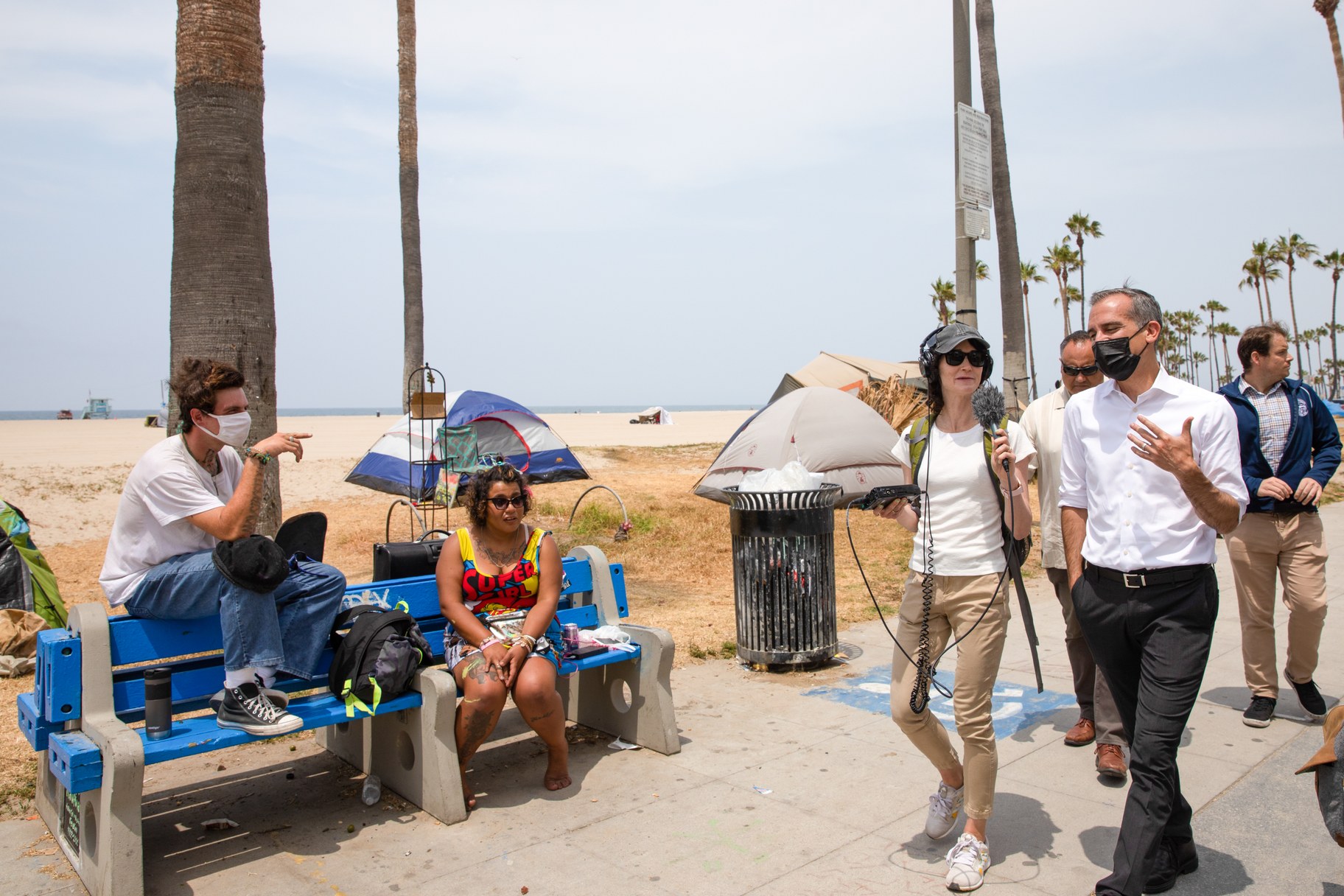 As Mayor Garcetti walks down the Venice Beach boardwalk, a young couple sitting on the bench point and recognize the mayor. The young man in the white t-shirt later says, "I don't support that man." June 29, 2021. Photo by Zaydee Sanchez for KCRW. 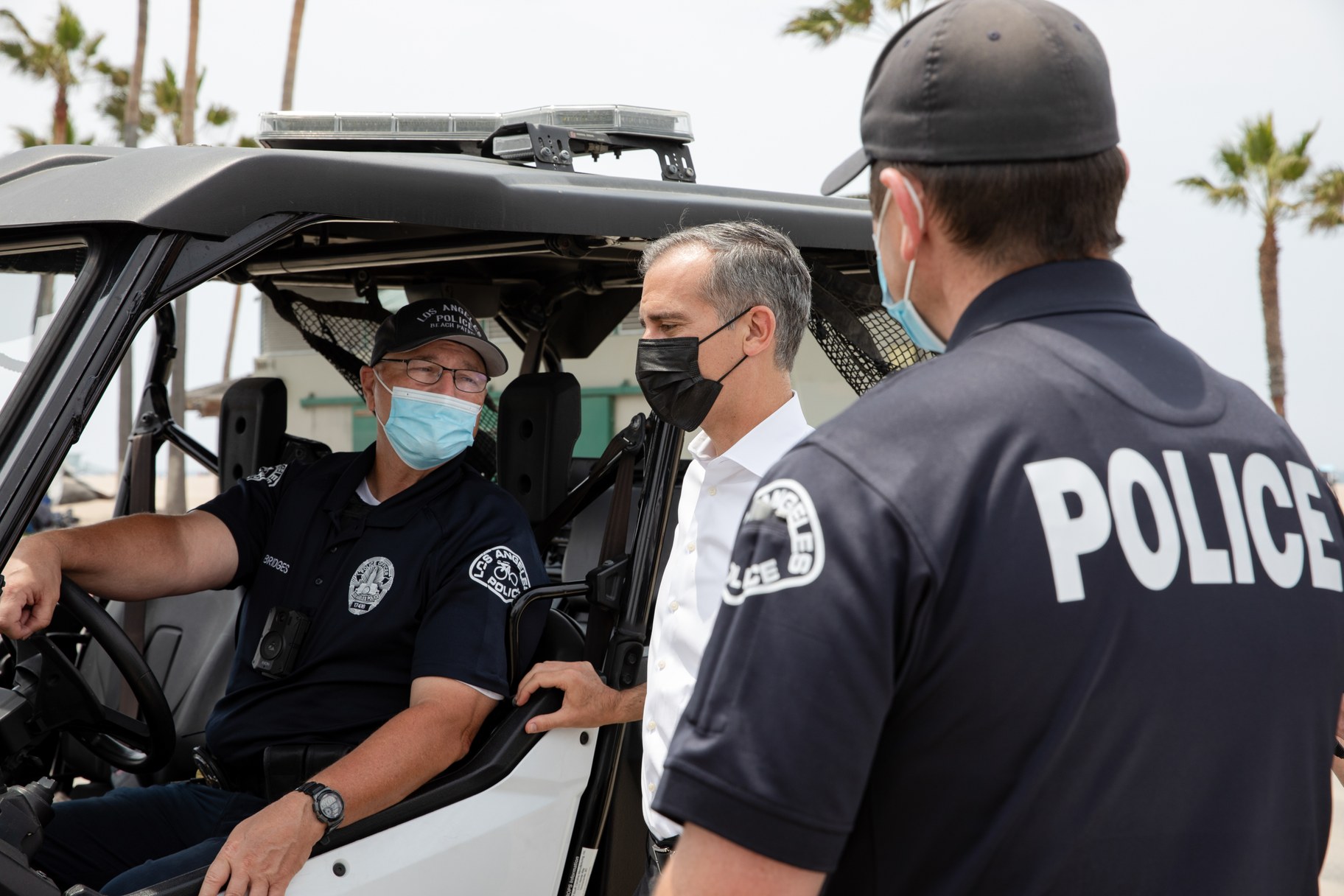 At the Venice Beach parking lot, Mayor Garcetti speaks with LAPD officers after he was given a tour of homeless encampments along the boardwalk. June 29, 2021. Photo by Zaydee Sanchez for KCRW.

Garcetti says that 54 people have been moved indoors in the last couple of weeks. The city is planning to start sanitation cleanups along the boardwalk on Friday, and people will have to move their tents and belongings.

A lieutenant with the LASD’s homeless outreach team says they’re not planning enforcement actions, but some homeless advocates don’t believe them.

“This is all about intimidation,” says Carlos Maroquinn, a community organizer and homeless advocate. “You see them with their guns on their sides, it’s intimidation. And it's a concern because the unhoused people have been hurting for a long, long time.” 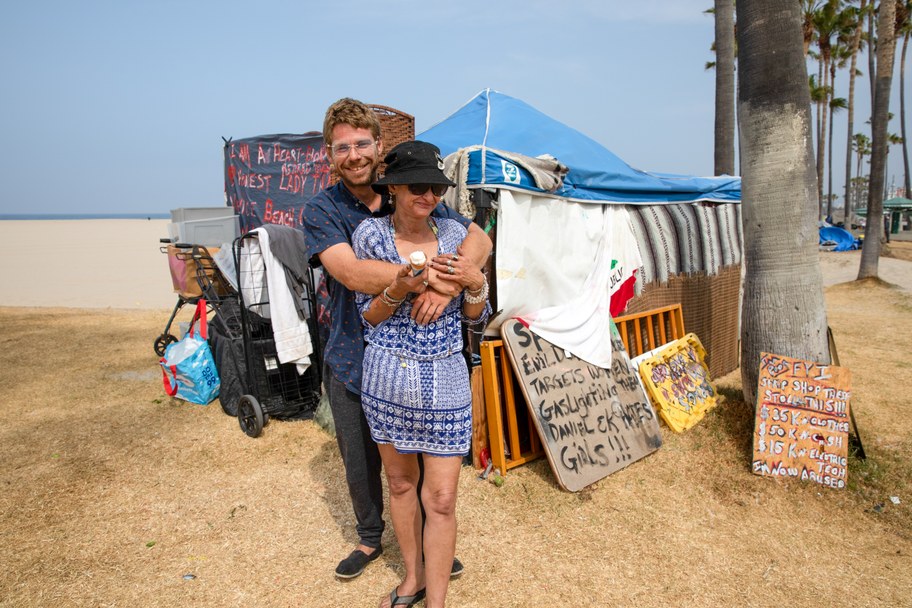 Dixie and her boyfriend Brian (they didn’t want to share last names) have been living on the Venice boardwalk since the beginning of the COVID-19 pandemic. Job loss left them no choice but to sleep on the boardwalk. June 29, 2021. Photo by Zaydee Sanchez for KCRW. 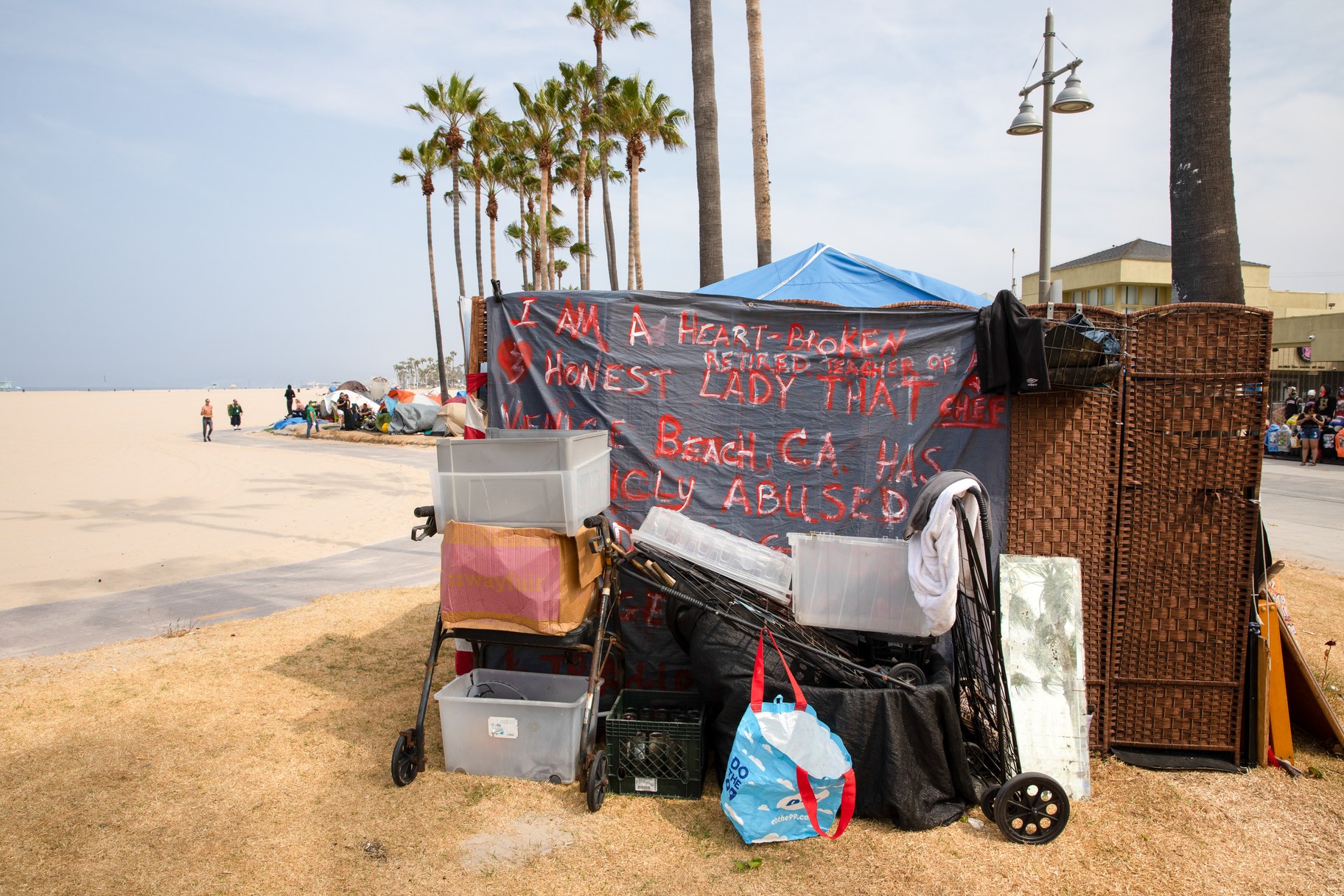 What do unhoused people living on the boardwalk think about all of this?

Like most large encampments, people’s individual stories and needs vary endlessly. Levi Walls, for example, wants a plane ticket back to his home state of Washington. He says he would accept a hotel room in the meantime, though he’s wary about strict rules like curfews.

“It's condescending,” he says. “I used to build houses, you know, I used to have a life.” 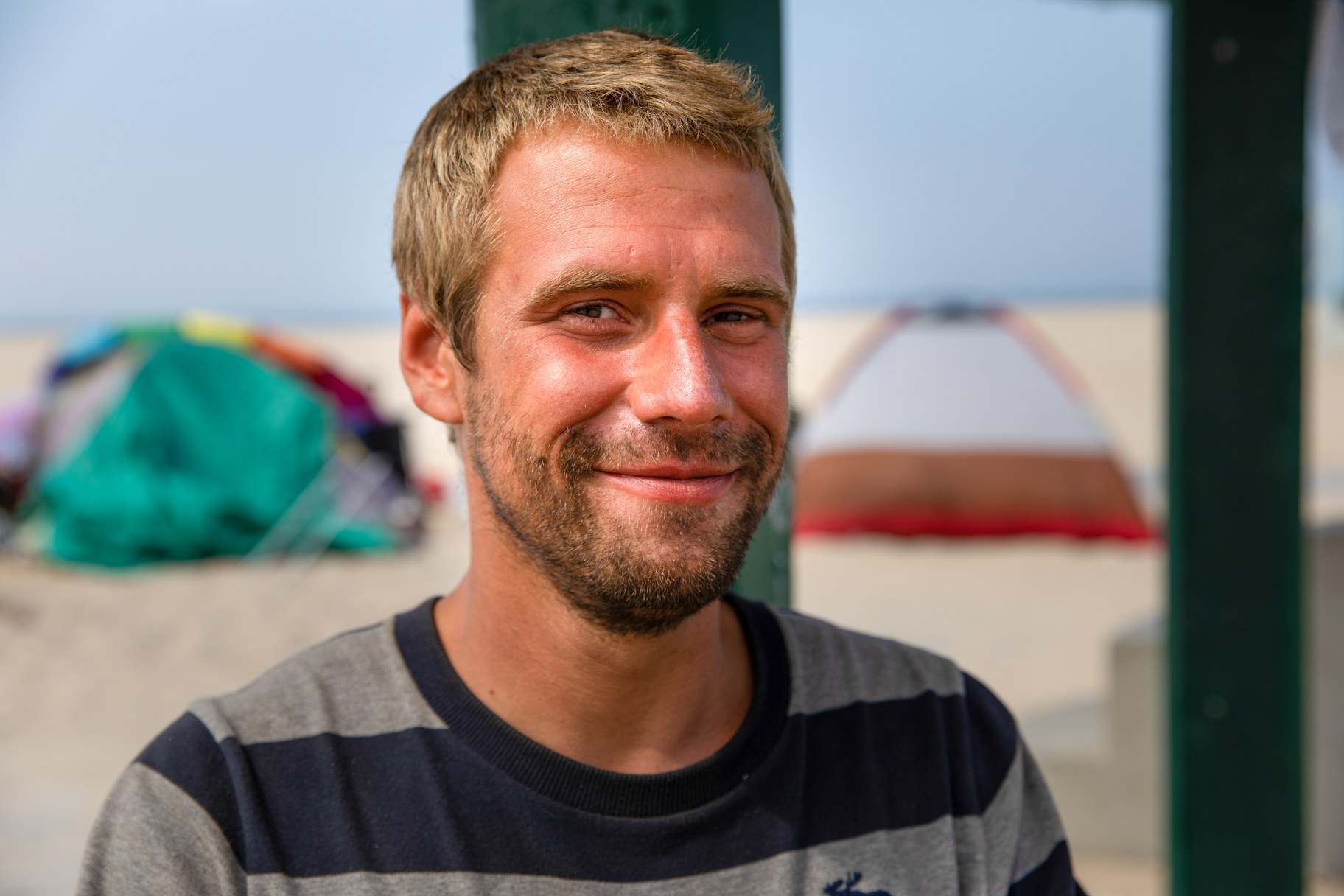 Levi Walls, an unhoused man, sits along the boardwalk in Venice Beach. He is one of many who do not own a sleeping tent. June 29, 2021. Photo by Zaydee Sanchez for KCRW.

Other people need permanent supportive housing, which is subsidized apartments for people with physical disabilities or mental illness. Others need temporary help with rent to get on their feet.

The demand is probably going to exceed the supply. Jeremy Washington, who’s been homeless in South LA, showed up in Venice this week because he heard that the city would be offering people housing.

Unhoused advocates will likely show up on Friday as the city starts sanitation cleanups. The sheriff’s department is expected to move in this weekend, ahead of Villanueva’s July 4 deadline.