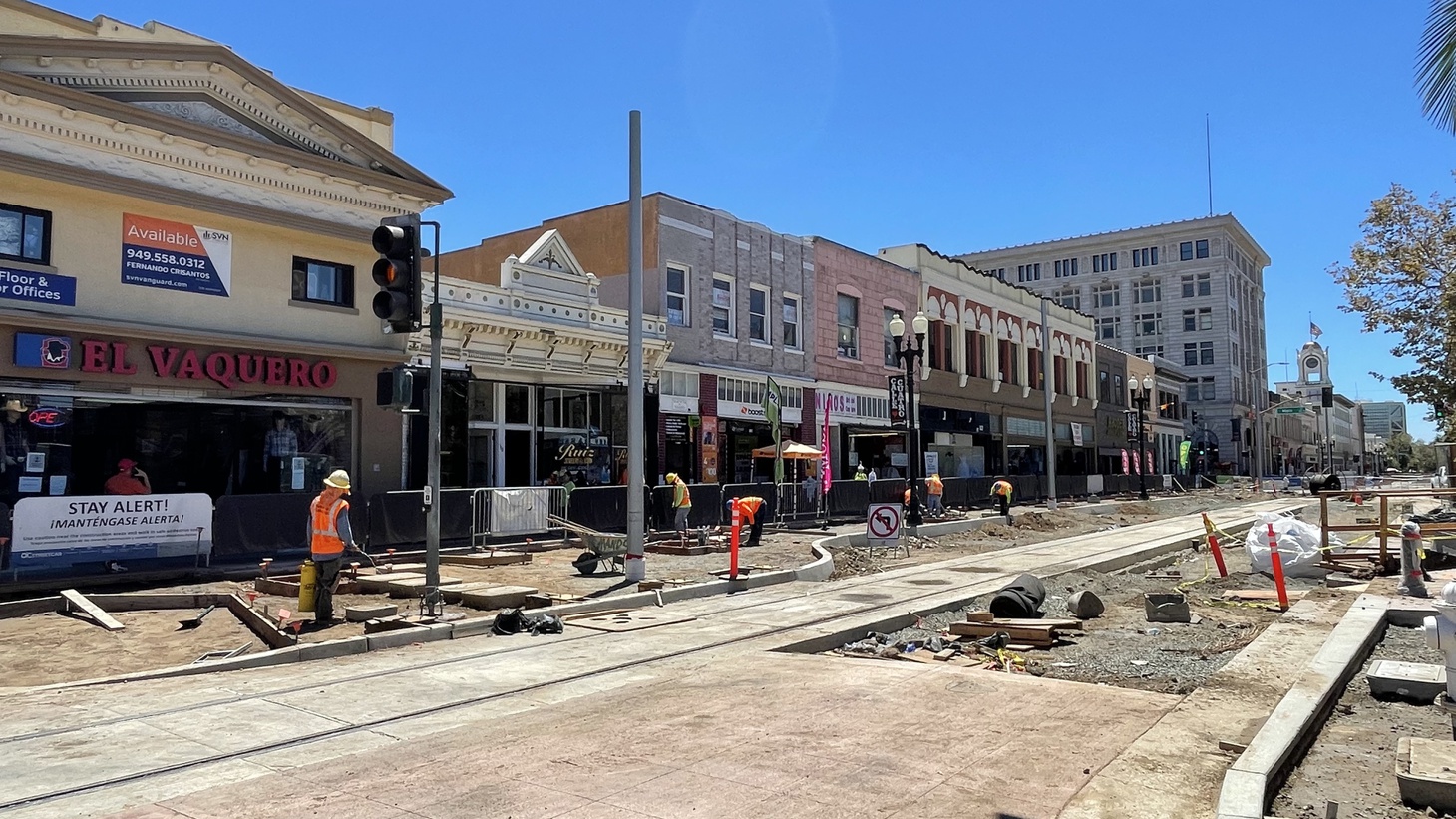 The construction zone on Fourth Street in downtown Santa Ana is closed to cars. Shoppers must navigate on foot to visit stores. Photo by Megan Jamerson/KCRW.

Marcela Rodriguez was at the travel agency she’s owned and operated in downtown Santa Ana for 30 years when a man wearing construction gear walked in and asked whether her business had a backdoor. He explained her customers would need to use it starting the next week, because the entrance of her shop was about to become a construction zone. The answer was, no, she didn’t.

Four days later, a construction crew ripped up a two-block stretch of Fourth Street, closing off the street to cars, blocking parking, and bringing noise, dust, and an end to the foot traffic that had been the lifeblood of Rodriguez’s business. 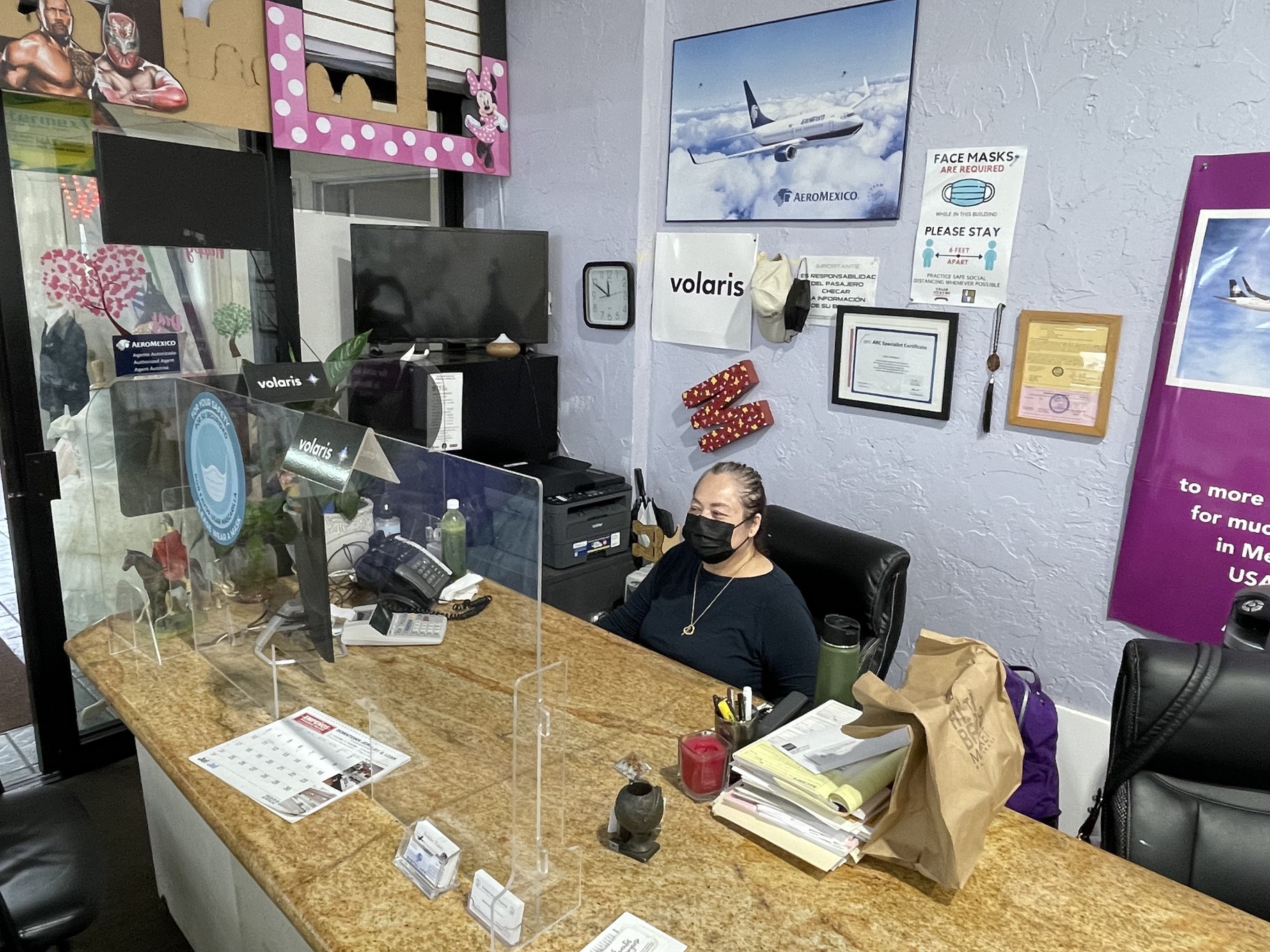 On a good day of business, Marcela Rodriguez used to have up to 15 walk-in customers visit her travel agency. Now she mostly sits alone waiting for the phone to ring. Her customer base is made up of older immigrants who don’t use the internet. Photo by Megan Jamerson/KCRW.

The disruption, which has continued for nearly six months so far, is for the OC Streetcar, a joint project of the Orange County Transit Authority and the city of Santa Ana. The four-mile electric train will be the first of its kind in Orange County and will start in downtown Santa Ana and run north to the city of Garden Grove. Supporters of the project say it’s a win-win for reducing traffic and emissions while bringing more customers to Fourth Street.

This area is a historic community gathering place where street fairs and Mexican Independence Day parades take place, and people come from as far as San Diego to enjoy it, says Rodriguez. “It was a big thing, Fourth Street,” she says. “You can see all your people here. Everyday was a fiesta.”

The Santa Ana streetcar is supposed to be up and running in 2024. But in the meantime, many business owners like Rodriguez say they are paying the price for this effort to make downtown even better. Some question if they will even be around in two years to benefit.

“It's not just we're a bunch of complainers,” says Rodriguez. “The reality is really bad. Because we're not making any business because of this.”

Santa Ana Mayor Vince Sarmiento says he doesn’t blame the Orange County Transit Authority (OCTA) for the pain to local businesses. “I don't think there's any intentional effort by OCTA to harm. I think this is a byproduct of this being a project that we haven't done often.” This is the first of a number of transportation projects the agency plans to roll out in the county.

An Orange County Transit Authority spokesperson wrote in an email to KCRW that they sympathize and “understand that construction projects like this can be difficult.”

Prior to breaking ground on Fourth Street, OCTA gave $400,000 to two downtown business associations to supplement their advertising budgets during construction. After merchants complained it wasn’t enough to make up for their lost revenue and staged a protest, OCTA added hundreds more signs to the area, including electronic marquees and sidewalk decals providing walking and parking directions. They also updated their website with Go Pro videos on how to get around downtown.

That didn’t work, local merchants say. Most businesses downtown are old-school and advertise through word of mouth. So the business district started buying Spanish language newspaper and radio ads.

Dana Jazayeri say that’s still not enough to help his gift shop, because of the lasting damage done during the early weeks of the project. He says efforts to help businesses were mismanaged. He points out that it took several weeks to install signs in both Spanish and English to say businesses are open.

“Ultimately, we're guinea pigs. Their marketing, the signage, everything you saw in the community outreach,” says Jazayeri. “It's them figuring out what they should be doing after the fact.” 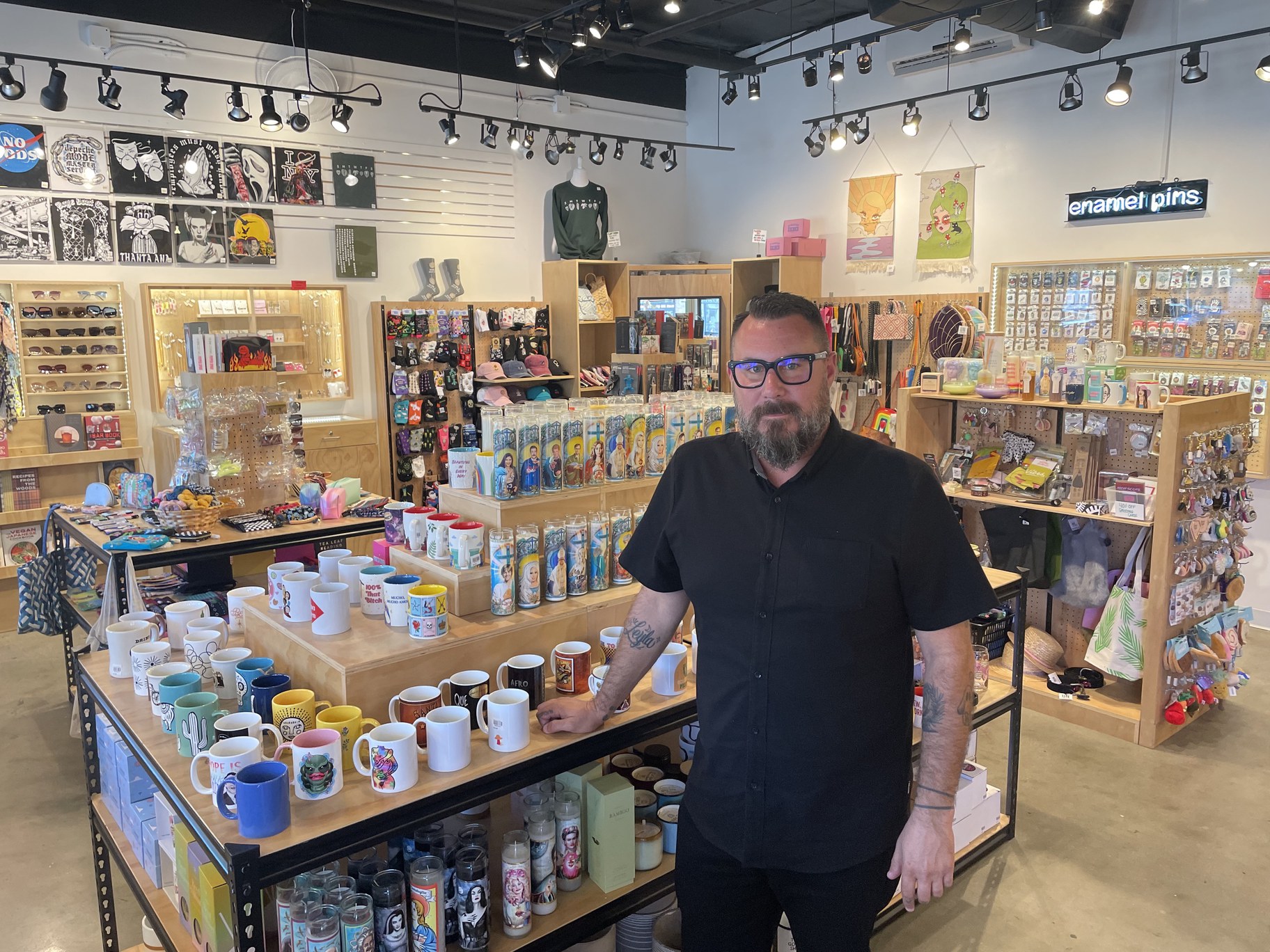 Dana Jazayeri’s revenue is down 50% at his pop culture gift shop on Fourth Street since construction started in February. Photo by Megan Jamerson/KCRW.

Jazayeri says his customers have given up coming to his shop even though one lane of traffic reopened in front of his store in June. So he worked out a deal with his landlord to stop paying his rent temporarily.

Jazayeri is among the business owners calling for the OCTA to look into creating their own business interruption fund. The transit authority would give cash payments to business owners to cover lost revenue. It’s been done before locally. Los Angeles Metro created a $10 million annual fund to keep businesses open during the construction of the Crenshaw Expo Line.

But in Orange County, the Transit Authority said in an email to KCRW that after consulting with its legal counsel, they determined they were not “authorized to provide direct financial support to local businesses through a Business Interruption Fund, which would constitute [a] gift of public funds.”

Now the city of Santa Ana and the Orange County Board of Supervisors have pulled together just over $4 million to help the area’s businesses pay rent.

Santa Ana Mayor Vince Sarmiento says he has faith the streetcar will ultimately help business downtown, but it’s unfortunate the price is so high while it’s being built. “I do see a bigger picture here,” he says, “but it really is coming at the expense and on the backs of people that just can't afford it.”

Back at Rodriguez’s travel agency, it’s very quiet. The phone hasn’t rung once all morning, and no customers have walked in. Most days she spends the day alone in her shop waiting for her older customers to navigate a torn-up street to bring back their business.

She acknowledges that it’s unusual for a brick-and-mortar travel agency to still exist in 2022. But business was steady for her before construction, she says, because she catered to older folks who still want in-person services for booking flights to places like Mexico and Central America. Her customers aren’t comfortable using the internet to plan their travel.

Since construction began in February, the rail line has taken shape in the street, but shoppers still can’t drive up and park in front of Rodriguez’s storefront. Her revenue has dropped 90%, and in June she had to lay off her two employees. “It's really sad. It's really embarrassing,” she says.

She applied for the city and county grants and she’s received $4,300 so far. She says she’s extremely grateful, but that only covers two-and-a-half months of rent. The street in front of her business is scheduled to reopen by Thanksgiving.

“If you do a little math, you can see right there that I can’t survive like this, if this gets much longer,” says Rodriguez.

Streetcar aims to improve downtown Santa Ana. At what price to business owners?

Supporters of a new Santa Ana streetcar say it will bring more people downtown, but business owners say they don’t know if they will last to see the benefit.

This week marks the start of the 40th annual Outfest in LA, which includes more than 200 films and comedy programming featuring Margaret Cho and Kathy Griffin.