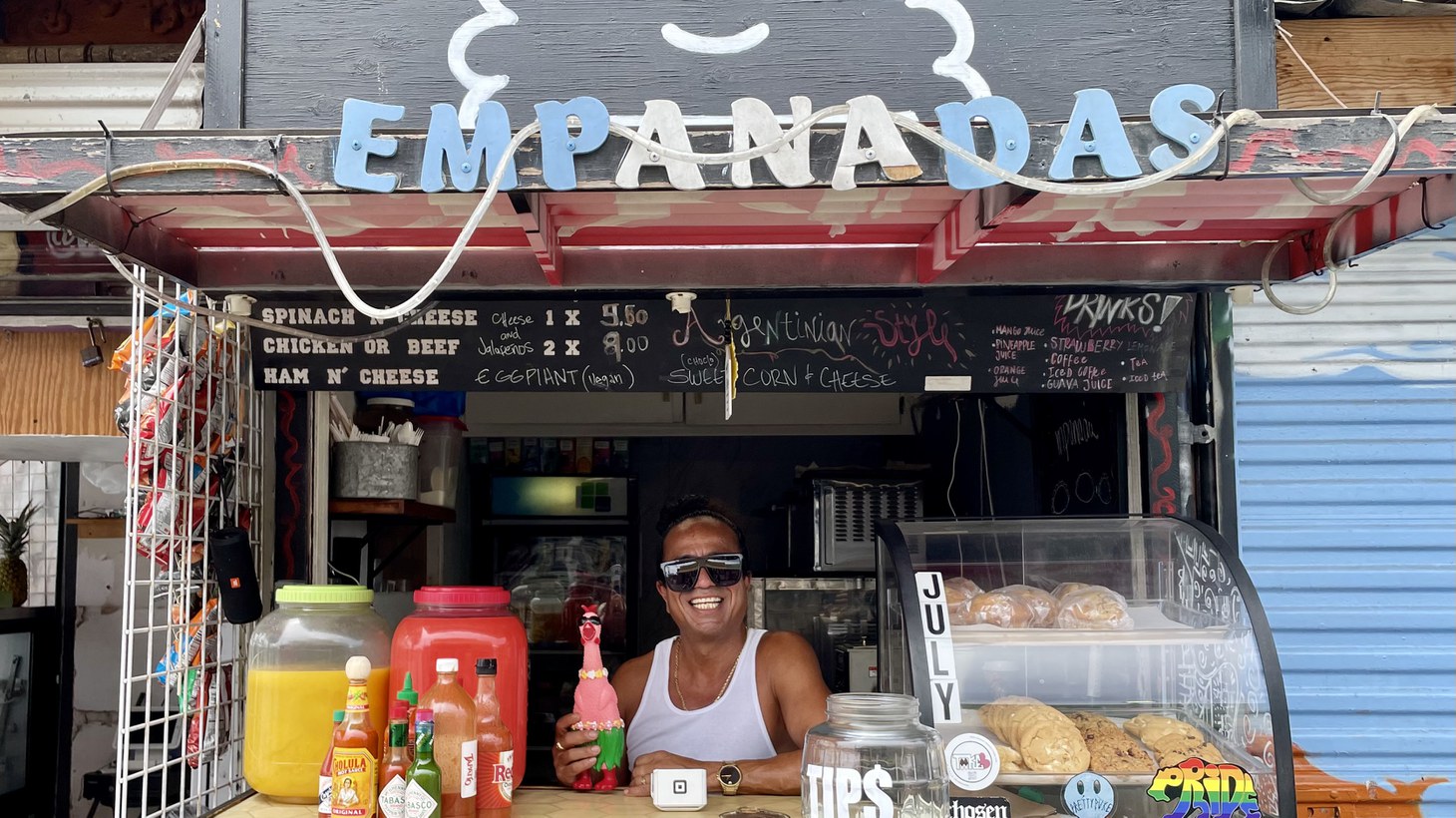 Rico Alsaro squeezes a squeaky rubber chicken to grab the attention of people passing by his empanada shop on the Venice Beach Boardwalk. Photo by Megan Jamerson/KCRW.

It’s free to stroll the famous Venice Beach Boardwalk, watch people play pickleball, or sit in the sand near the waves — and that’s what the tourists have been doing this summer instead of shopping, say boardwalk vendors. This year inflation makes it more expensive to buy a Muscle Beach t-shirt or to grab a corn dog, especially for visitors from Europe, which typically sends more than half a million tourists to LA annually.

“People are more conservative with their money because they've been through COVID … And they know that they need it for other stuff,” speculates Nader Ibrahim, a clerk at a boardwalk t-shirt shop. 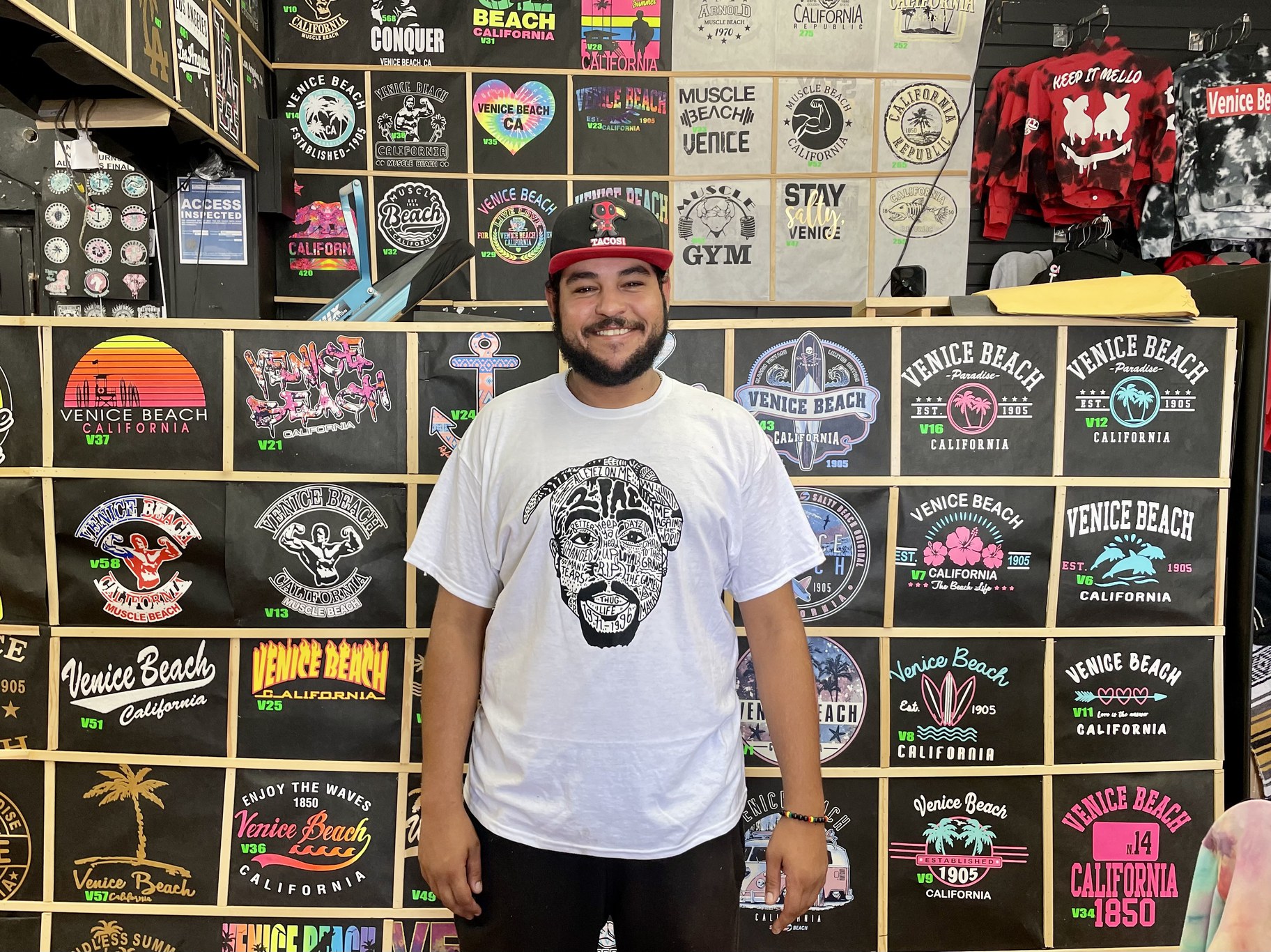 Nader Ibrahim is a student at Cal State Northridge and originally from Egypt. This is his second summer working at a t-shirt shop on the boardwalk. Photo by Megan Jamerson/KCRW.

The same goes for American tourists who no longer have the stimulus cash to spend, says Ibrahim’s boss, Derek Breland. “It was a bad season. We had more business when they were giving them the free checks.” 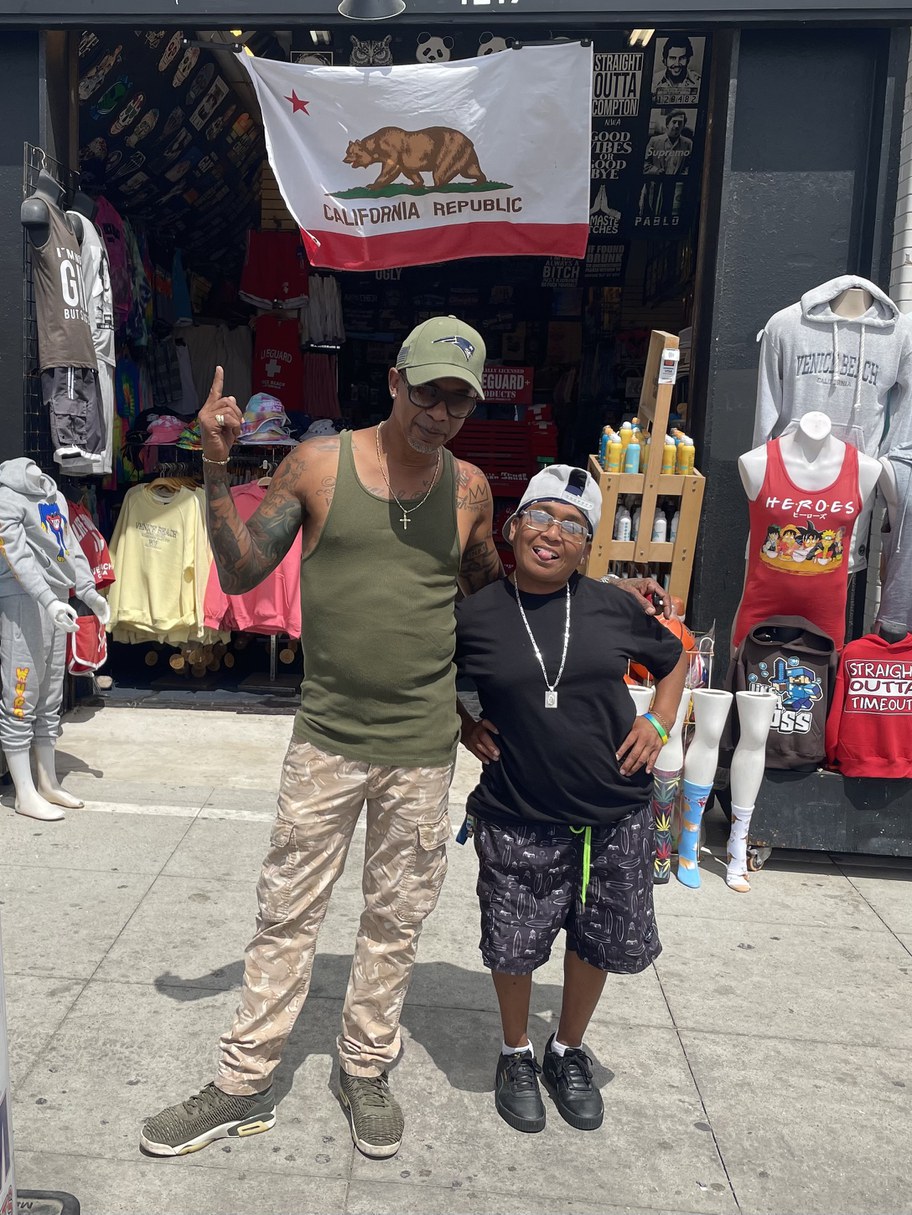 Derek Breland, left, stands with his employee Rocio Aragon in front of one of Breland’s three t-shirt shops on the Venice Boardwalk. Breland recently had to close a fourth store. Photo by Megan Jamerson/KCRW.

Breland has been in the souvenir business on the boardwalk for eight years. He owns three t-shirt shops and recently had to close a fourth. He says he’s still feeling the supply chain mess, since 70% of his inventory comes from China. His shop looks well stocked, but he says shortages mean he doesn’t have the normal variety of things like beach coverups and embroidered sweatshirts.

“There's several things that we just don't order anymore because we haven't gotten them,” says Breland. “Imagine all the stuff that we survived on from China and we're not getting.”

As he speaks with KCRW, there’s only a single customer at his shop taking a selfie in a tie-dye bucket hat.

But over at the skatepark, the railing is packed with spectators taking in some free entertainment.

German tourist Madeline Grüouep says she’s spending most of her money on experiences and food, not souvenirs or clothes. She and her husband Christian Grüouep are wrapping up a 16-day road trip that included the Grand Canyon and Las Vegas. He says the American custom of tipping 20% is double what they pay at home — but their minds aren’t really on the money. “It’s our honeymoon vacation,” says Grüouep. “So because of that we don't [think] about the money that much.” 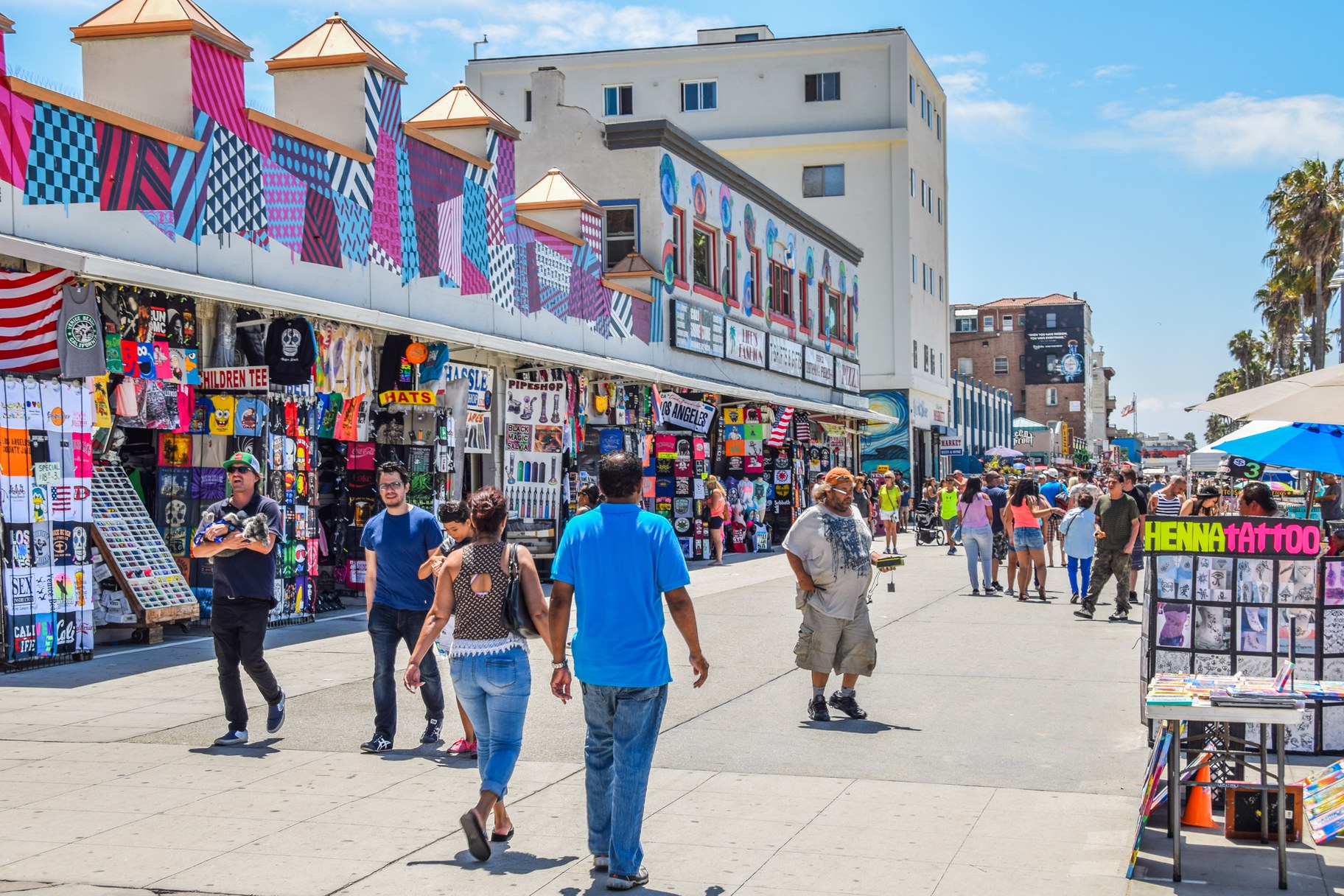 Souvenir shops on the Venice Boardwalk are feeling the impact of inflation and supply chain backups. Photo by Shutterstock.

When it comes to eating out, things look brighter for the boardwalk businesses. A lot of the food spots here say they are doing great, like Rico Alsaro’s snug empanada shop on the corner of 17th Street.

Alsaro lost his restaurant server job during the pandemic. When food vendors started opening up on the boardwalk, he got this job selling empanadas. “Actually, [I’d] never heard of empanadas until I started working here,” says Alsaro.

He fell in love with the food, so when the business went up for sale, he bought it. “It feels amazing just to be your own boss,” says Alsaro. “I'm putting in a lot of hours, but I’m doing it for myself.”

His shop’s rent ranges from $2,500 to $5,000 per month depending on the season, which Alsaro says he can make in a weekend. When the tourists go home this summer, he says locals visit him up to six times a week and thus keep the boardwalk alive.

“I love tourists because I can charge them a little bit more,” says Alsaro. “But the people that really keep my business going [are] the regulars from here, from Venice, because they love the empanadas.”