Composting in LA isn’t as easy as it sounds Food scraps collected by LA Compost are used to fertilize flowers and vegetables in community gardens like this one in Venice. Photo by Caleigh Wells.

Venice Blvd. consists mainly of small storefronts and apartment complexes, but on one corner, next to the fire station, a large garden interrupts the buildings crammed together.

The plants there are grown with the help of broccoli stems and banana peels.

The nonprofit LA Compost maintains the garden. They have a few dozen hubs at community gardens like this one on Venice.

“Our compost hubs are open to the community to come and drop off food scraps, where we turn food waste into soil amendments,” says Kenny Derieg, Westside Regional Hub Manager for LA Compost. 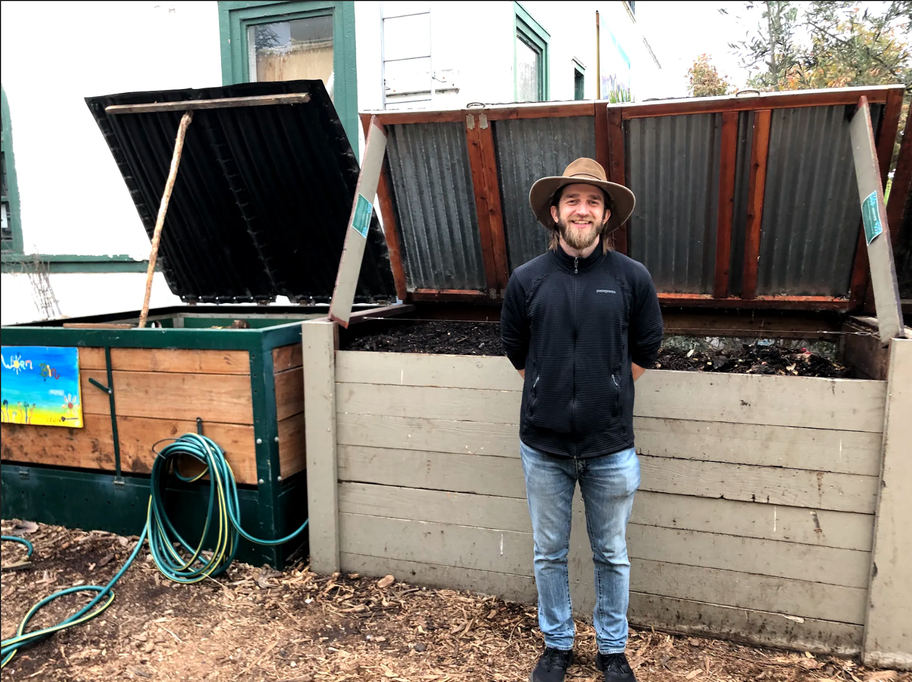 Food and food scraps make up nearly a quarter of the waste we generate, which mostly end up in landfills. Deprived of oxygen, they produce the greenhouse gas methane, which is 20 times more harmful than carbon dioxide.

Composting is an effective way for Angelenos to reduce their carbon footprints. For people who don’t have the backyard or the time to compost themselves, bringing it to a community garden sounds like an easy option.

However, Dereig says, “In order to have a healthy compost pile, we like to have equal amounts of nitrogen and carbon. The nitrogen comes from food scraps, from green waste. And the carbon comes from brown waste or mulch, so dead leaves, twigs … anything from trees is considered a carbon.”

That’s why LA Compost divides its process into three bins. The roughly 150 residents who have signed up to bring compost to this garden dump their food scraps into bin number one. Once that fills, volunteers transfer all 1,200 pounds of rotting food into bin number two. 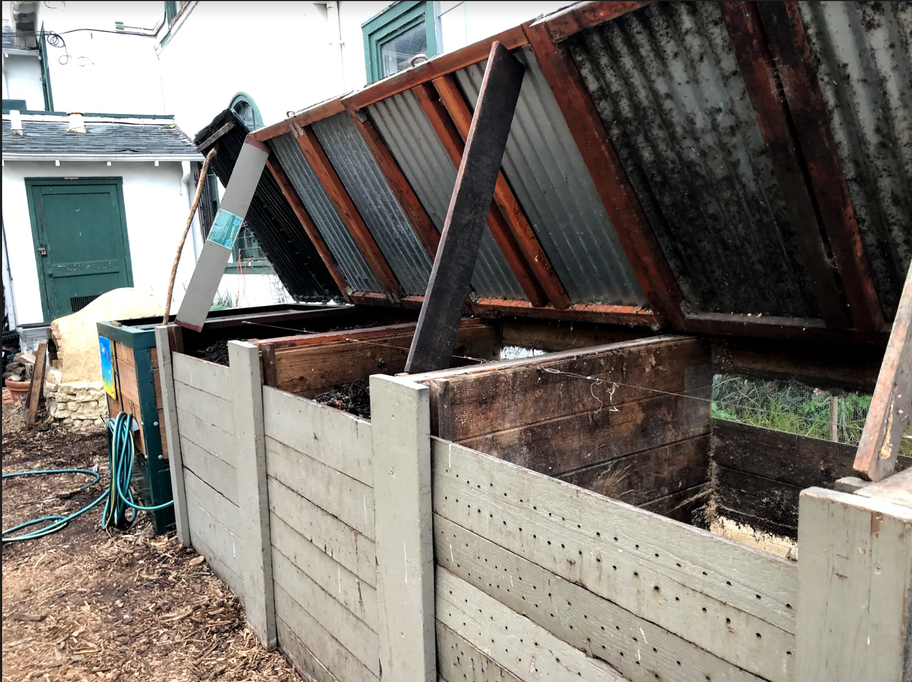 LA Compost uses a 3-bin composting system at each of its 32 hubs in LA County. Photo by Caleigh Wells.

“The pile is sitting at about 140 degrees … and the heat is the byproduct of the microorganisms doing their job. … [It] ends up becoming an oven where stuff is baking/cooking down,” Dereig says. “If we break into the pile, you see the steam that seeps out.”

Those microorganisms need oxygen to survive. So every week, volunteers dump the contents of bin number two on the ground, stir it, check that the nitrogen/oxygen balance looks good, and throw it back in. They do that for about a month.

“Then we flip it into this third bin over here. And this is where we allow it to cure,” Dereig says. “Once it reaches 80 degrees, we know this compost is ready to be sifted and get added back into the garden, into the soil.” 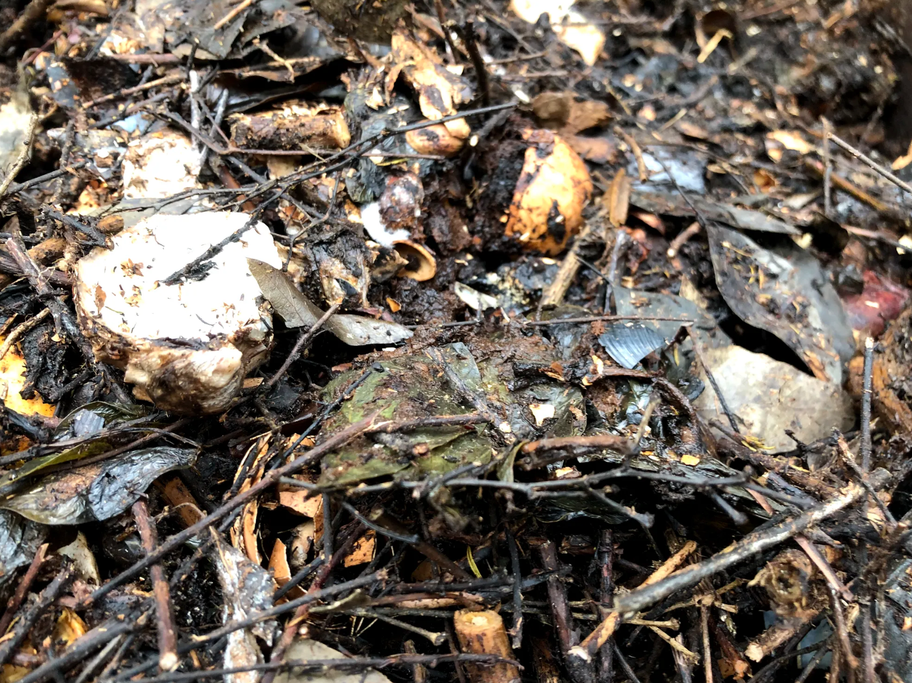 Food scraps like these can take two months to become usable compost. Photo by Caleigh Wells.

To get involved, simply sign up on Compost LA’s website, enter a zip code, and they’ll email information for the nearest hub that’s accepting food scraps from new residents.

However, only eight out of LA Compost’s 32 hubs are taking new people. The rest are closed to the public or at capacity.  For West LA residents, the closest option is in downtown.

Dereig says it’s been a challenge to keep up with growing demand: “Unfortunately there are times when the bin reaches capacity, and unfortunately we have to turn some folks away.”

Demand is high because a lot of cities in LA County don’t accept compost. Most of them have green bins, but the rules about what goes in those bins changes across city borders.

For example, Burbank will only accept stuff from your backyard, like dead leaves, branches and grass trimmings. Los Angeles will accept whole foods, like the moldy orange you never got around to eating, but not the orange peels.

It’s much more complicated than in Northern and Central California. Alameda, for example, accepts compost countywide.

“LA County is more densely populated, and so the locations and farms that use the compost generated from our organic waste are farther out. It costs more to ship it to that location,” says Coby Skye, who oversees the environmental program at LA Public Works.

And building a composting facility in LA County comes with its own challenges.

"We also have more stringent air quality regulations, so to develop composting facilities within the South Coast Air Quality Management District (which most of LA County is in) would require those facilities to be fully enclosed. And to pull and treat all of the air within that facility ... that adds to the cost of the composting significantly,” Skye says.

LA Compost gets around those costs by using compost at gardens where food scraps are collected. But there are too many people and too little green space to do that for all residents.

So the burden of composting in Los Angeles falls on Angelenos, such as Kendra Schussel. She is determined to divert her food waste from landfills. But after months of research, she still hasn’t found a solution. 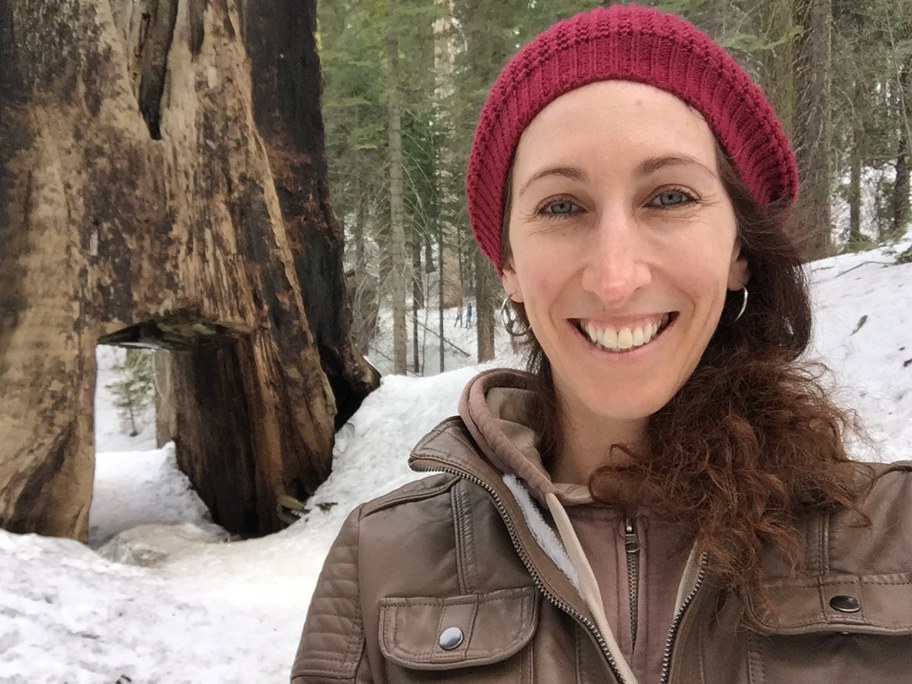 She paid for a private curbside service until a couple of months ago, when the company stopped servicing her neighborhood. Then she found a neighbor to take her food scraps for a backyard compost -- until that compost pile filled up too.

Her landlord nixed backyard compost for fear of rodents. She’s tried to start a compost system at her daughter’s school, but nobody wants to run it.

“There does seem to be hesitation on more people’s part to start a compost system,” she says. “I’m still trying despite having difficulties doing it. I want to see trash become compost.”

So does the state of California.

The Short-Lived Climate Pollutants Law, passed in 2016, set a goal of cutting the amount of organic waste bound for landfills in half from 2014 to 2020, and then cutting it in half again by 2025.

We haven’t hit the 2020 target. That's why the city of Los Angeles started a year-long pilot program for 18,000 homes last May. People in the target neighborhoods can put their food scraps in their green bins. The plan is to make it a citywide service after the pilot ends.

Skye says it goes beyond city limits: “In the next two years, you’re going to see a major rollout by every city and county in California to meet this new law and to provide service to every resident and every business. So it’s going to be very exciting to see that opportunity come out to every community.”

But the financial challenges of composting in Southern California aren’t going away. Managing organic waste will become more expensive, which will likely mean higher bills for trash collection.

The challenges of composting in LA

Composting in LA isn’t as easy as it sounds

The nonprofit Compost LA maintains community gardens where residents can drop off food scraps, but many are at capacity, and cities have different rules on what’s allowed to...

How unionizing could change the lucrative video game industry

Around Southern California and at other tech hubs nationwide, video game workers (and other tech workers) are trying to unionize. Emma Kinema co-founded Game Workers...

‘Parasite’ house is an example of modernist architecture