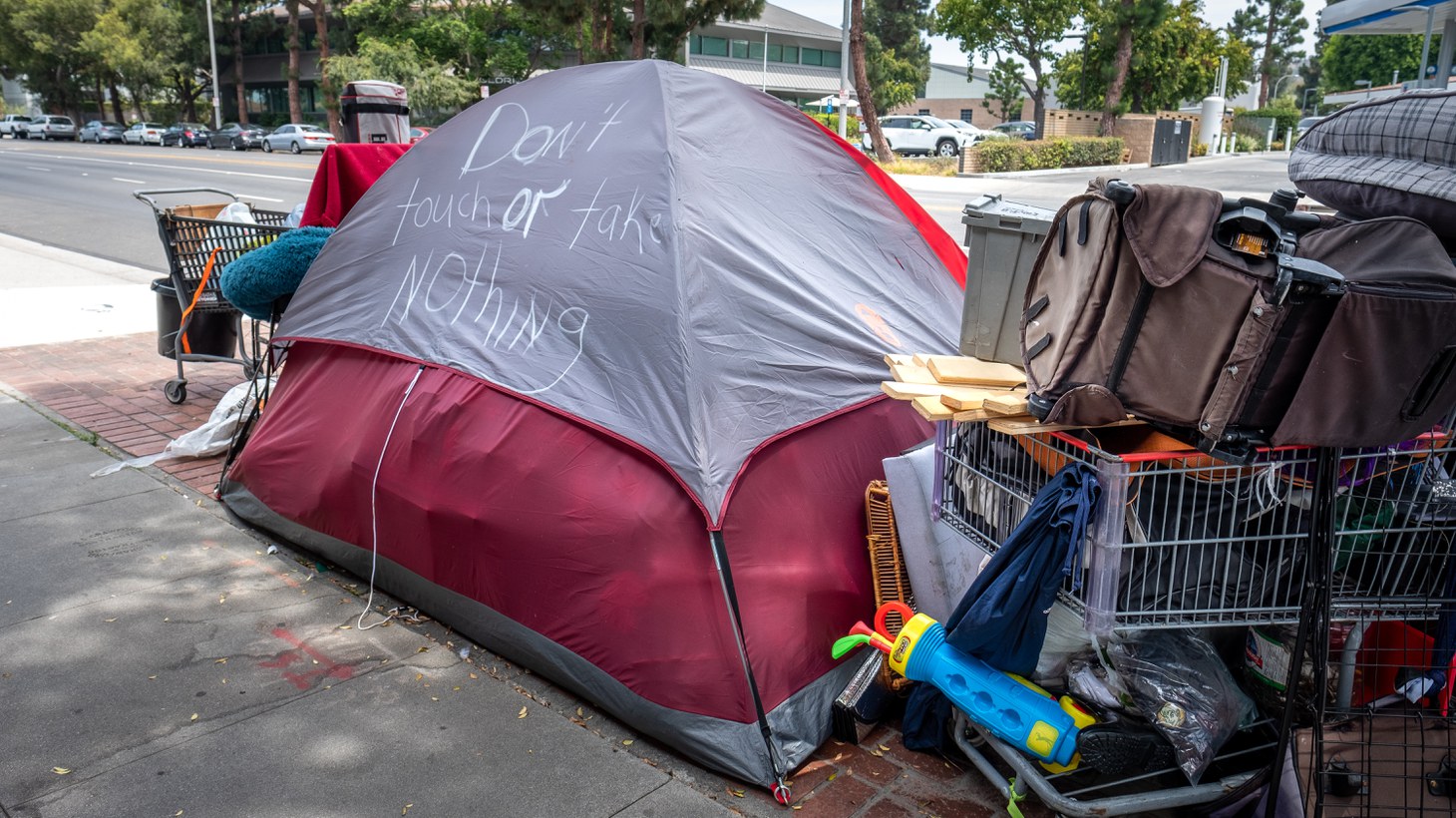 An unhoused Angeleno wrote on their tent, “Don’t touch or take nothing,” in Culver City, CA, July 20, 2022. “People in the city and the county have essentially over these years worked to address and reduce the problem, but not with the fortitude of ‘this has got to end,’” Karen Bass says of the homelessness crisis. Photo by Amy Ta.

With more than 41,000 people estimated to be experiencing homelessness in the City of LA by last count, the crisis tops the list of concerns for voters as they assess the two mayoral candidates who will face each other in November.

KCRW sits down with each of the candidates as they defend their plans.

Caruso says that if elected, he’ll open 30,000 new shelter beds during his first year in office — about double the number the city has now. Garcetti told KCRW this could cost in the ballpark of $800 million.

So how would Caruso pay for the beds? He says he’ll appeal to the feds and state government, but doesn’t have a specific pot of money to point to.

“You have the federal government that’s issuing more money than it's ever issued in the history of the United States,” he says. “And we're going to tap into that and get our fair share. The State of California has more money than it's ever had in the history of the State of California. Governor Newsom has been very clear that solving the homeless problem is a top priority of his. And we're going to take a look at our $11 billion [city] budget and reset priorities.”

Caruso doesn’t want to discuss the details of how the city might rearrange its budget, saying that the process would begin with a “forensic audit.”

Bass, meanwhile, says that if she’s elected, she’ll move 15,000 people indoors, either to shelter or permanent housing during her first year in office. It’s unclear how many people would go to temporary versus permanent housing under her plan.

Like Caruso, Bass says some of the resources to support her plans could come from the federal or state government. “There is funding in DC that LA has not necessarily taken advantage of,” she says. She also says that she’s currently working on efforts such as getting the U.S. Department of Housing and Urban Development to change certain regulations in ways that would make it easier for low-income tenants to use federally-funded rental vouchers.

But ultimately, like Caruso, Bass’ main argument in her own favor comes down to asking voters to trust her commitment and leadership skills more than any policy proposal.

“I do believe that I can make a dent,” she says. “People in the city and the county have essentially over these years worked to address and reduce the problem, but not with the fortitude of, ‘this has got to end.’”

Garcetti criticizes Caruso and Bass on homelessness. How do they respond?

Museums, a library, botanical gardens, and maybe even a veterans’ cemetery are part of a redevelopment plan for the Great Park. It all might face challenges from former...

LAUSD’s eased COVID rules: ‘I’m going to trust them on this,’ says parent

On this first day of LAUSD’s new academic term, Heidi Kalin is excited about her eighth grade son having more structure back in his life, and more campus events to choose...