Tanker 914 is one of four DC-10 jets converted from passenger service to firefighting by the Albuquerque-based 10 Tanker. The company sends its planes around the globe to battle blazes, but they become a regular fixture in the Southern California skies for several months of the year. Each aircraft can carry 9,400 gallons of retardant. Photo by Matt Guilhem / KCRW.

So far this summer, Southern California has gotten off easy when it comes to wildfires. But it’s not a question of if the region will burn, it’s a question of when. Once the spark catches, the Santa Maria Airport, north of Santa Barbara, will be among the places helping fight the flames with air power.

“We are the largest runway between San Jose and LAX for civilian airports,” says Chris Kunkle, VP of operations at the Central Coast Jet Center. Because the runway is 8,000 feet, Santa Maria is one of a handful of bases in the state that can host the biggest firefighting aircraft.

The jet center Kunkle oversees is known as a “fixed base operator,” or FBO. They provide services to the private planes that come through, including the hulking fire aircraft. Among the services on offer is fuel. But lately, Kunkle says getting the jet fuel the planes need has gotten a lot harder. A shortage, not so much of the fuel itself, but of the logistics to move it around is impacting multiple western states. That could make for some serious challenges once SoCal’s fire season gets into high gear in the late summer and early fall. 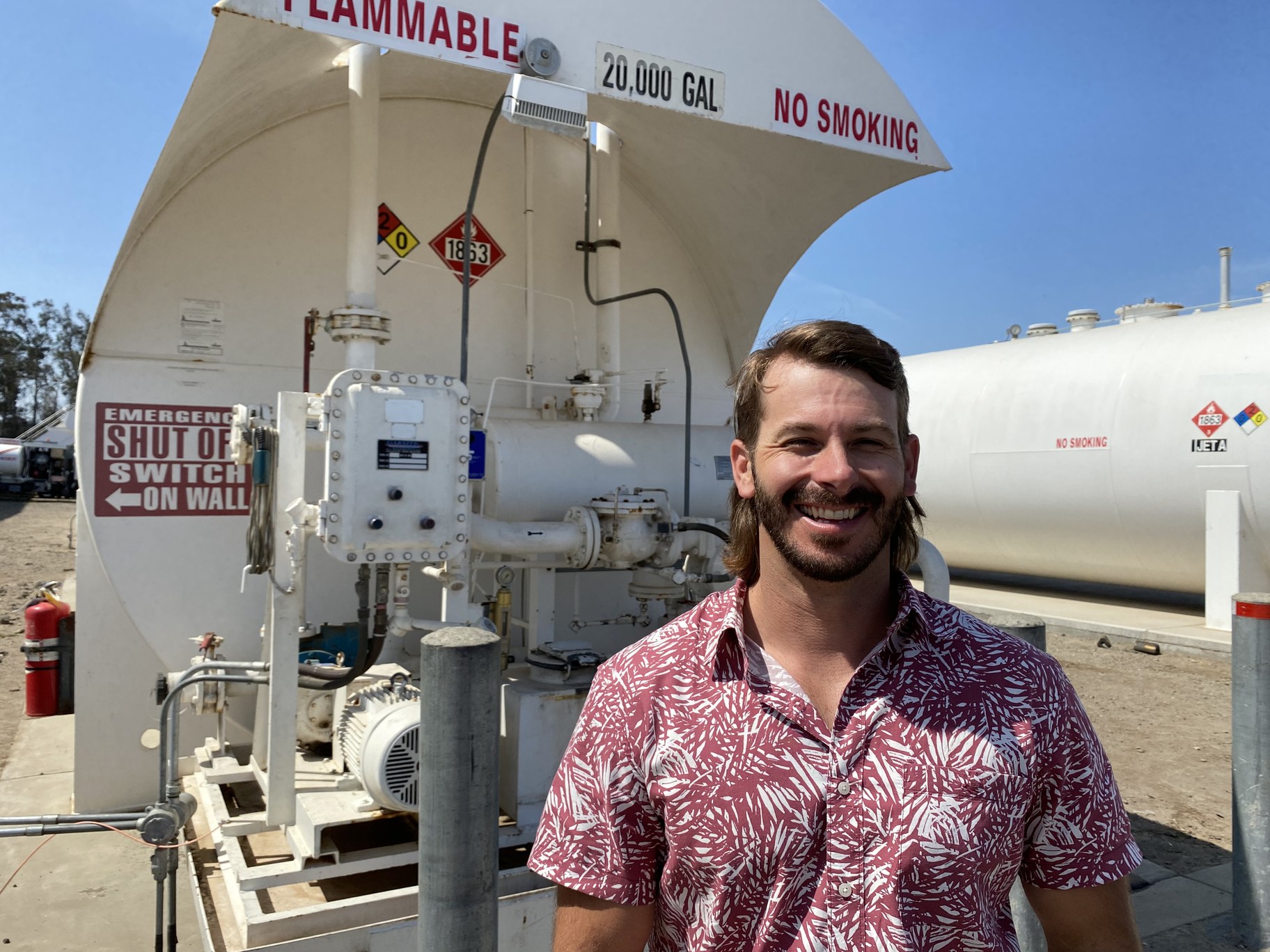 Chris Kunkle stands by the huge fuel tanks at the Central Coast Jet Center. The VP of operations says the tanker base in Santa Maria came online in 2007 after it outgrew the Santa Barbara Airport. In its busiest year, Kunkle says aerial firefighting operations at the base went through 4.8 million gallons of fire retardant. Photo by Matt Guilhem / KCRW.

Imagine this: Multiple wildfires are burning in Southern California. The big tanker jets have been called in, and some are flying out of the base in San Bernardino while others use Santa Maria to load up on fuel and retardant. Suddenly, Santa Maria’s gas tanks run dry. Unless the Inland Empire has fuel to spare or can conjure more (both unlikely), the planes using Santa Maria might have to go all the way up to Sacramento or Merced for fuel before flying back down the state to make a drop on the fire.

If that sounds bad, a version of it is already playing out.

“This morning is a perfect example,” says tanker jet pilot Ryan Curl. “We got a call from our chief pilot, they are up in Helena, Montana, and they just got dispatched to a fire, and their estimate is they’re going to be able to pull one more load out of Helena, and then they’re going to be completely dry. They’ll be out of fuel up there, so they’re going to have to relocate down to Pocatello, Idaho or maybe over to Medford, Oregon.”

Curl flies a DC-10 passenger jet that’s been converted to one of the largest firefighting aircraft out there. The company he works for, 10 Tanker, sends their small fleet of big planes all over the world to fight fires.

He says shades of the fuel shortage his buddies in Montana dealt with are showing up at Santa Maria.

“For them to say that there is now a problem and it’s related solely to the supply line as opposed to the storage, then for us, that is a pretty big deal,” Curl says as he surveys the tarmac.

A fire in June brought the fuel issue into sharp focus for Santa Maria, says the mulletted Kunkle. The facility burned through half their fuel supply in a day but could only get one truckload – not nearly enough – to try and resupply. Thankfully the blaze was short-lived.

“The fire lasted two days, and we were able to restock all the tanks,” Kunkle says with relief. “Early fires in California don’t tend to go more than a couple days just because the fuels aren’t ready. So we got, I think we’ll call it luck.”

Typically, words like “ready” or “prepared” are what you want to hear when describing the efforts to put out a fire. “Luck” is definitely not bad, but it doesn’t exactly lend itself to tons of confidence.

It’s not unheard of that more rural airports that double as tanker bases experience fueling issues when the big jets come roaring in. But Ryan Curl, the DC-10 pilot, says something is different this year. Ryan Curl has had a long career in firefighting. The Idaho resident started battling blazes for the Bureau of Land Management on the ground in 1990. He became a pilot in 1997, spent years flying smaller planes that lead the big ones to drop sites, and eventually stepped into the cockpit of the converted jetliner in 2018. Photo by Matt Guilhem / KCRW.

“I think a lot of what we’ve seen in the past had more to do with just the fact that we often run out of smaller airports that don’t have the storage capacity, but now it’s become a supply issue,” Curl says.

One of the people responsible for keeping the Central Coast Jet Center fueled up is Mark Haynes in Abilene, Texas.

“I always laugh at people who say, ‘Where you from?’ I say New York City. It doesn’t get me too far down the road with them,” Haynes says with a laugh and Texas accent the size of a 10-gallon hat.

He’s a vice president of sales with Avfuel, one of the biggest suppliers to FBOs nationwide. He’s been in the fuel industry for 38 years and says he’s never seen the sector dealing with conditions like the current ones.

“As far as just looking at a big area and just how much demand is out there for fuel and the lack of trucking and the lack of supply — we’ve never encountered this before,” the Texas oilman says.

This year is presenting two problems: a lack of trucks and a general supply issue. Refineries in SoCal are chugging along, so the region has fuel. The big problem here, and across the West, is trucking. Haynes says a driver shortage is hobbling fuel mobility. 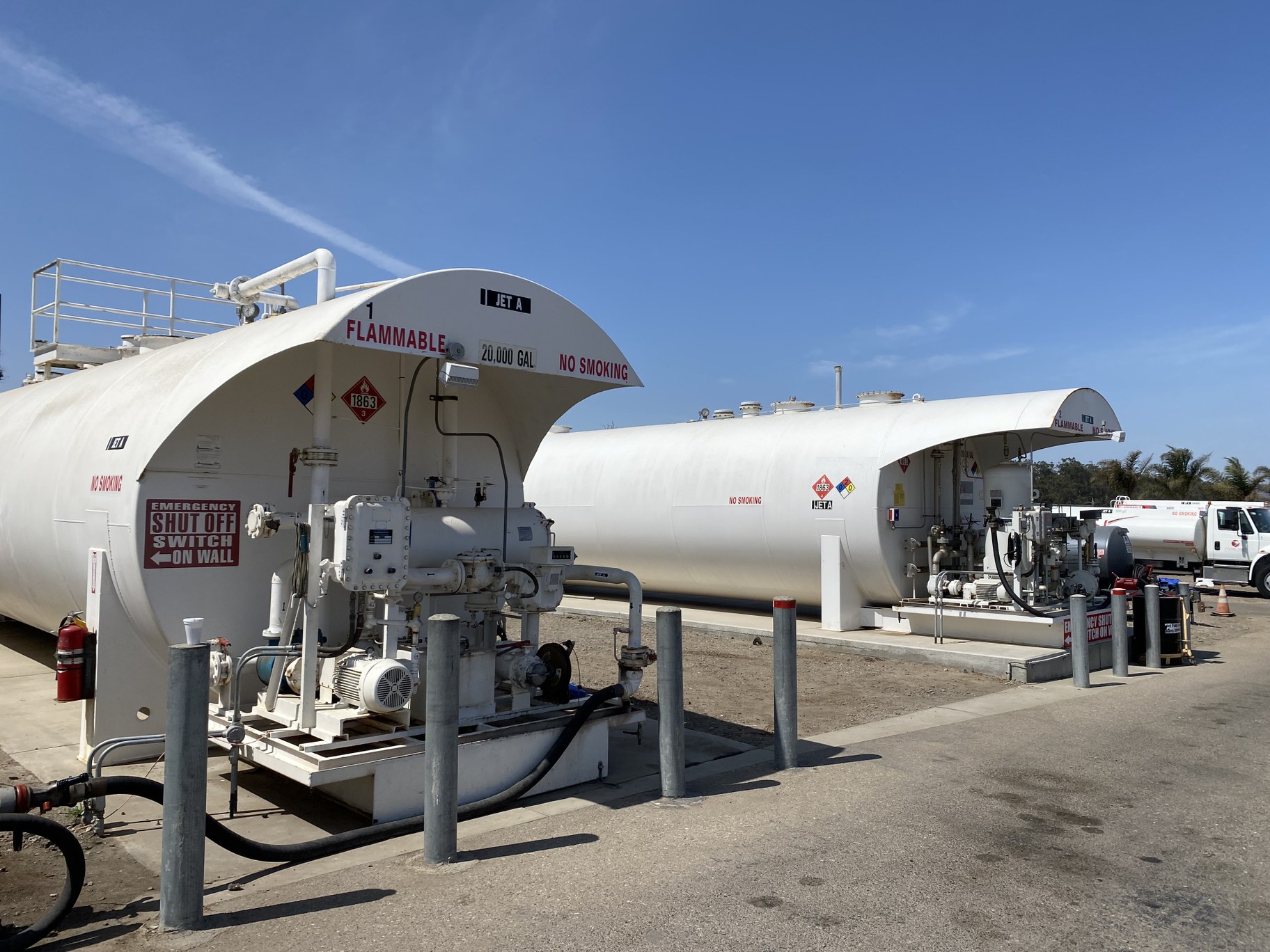 The so-called “fuel farm” at the Central Coast Jet Center is comprised of two massive 20,000 gallon storage tanks, as well as a few tanker trucks that can move the fuel around the airport or provide extra storage capacity. Photo by Matt Guilhem / KCRW.

Limited number of drivers, limited speed of moving fuel. Although the crunch is suddenly acute, Haynes says the trucker trouble has been something of a slow moving catastrophe.

“This has not just been coming on overnight,” Haynes says, his tone becoming authoritative. “This was happening in ‘17 and ‘18 and ‘19. Just ‘20 took all the wind out of the industry, and now it’s just a flat rebuild of trying to get these people back and working.”

He says this isn’t something that can be remedied quickly, but why are we here in the first place?

“It’s kind of like the toilet paper, everybody had to have it,” Hasty says in a way that lands between a laugh and a sigh. “And that’s what’s happening now. Now you can’t get a load of jet fuel, so what are the airports doing? They’re filling their tanks to the brim, ordering, ordering, ordering.”

All that buying could be too much of a good thing for Hasty.

“I can’t do half the loads that we’re being requested for at this point,” he says.

Hasty can’t keep up because like so many other sectors right now, finding people to do the job has become a herculean task.

Competition in this space is fierce. At Jetspeed, the workday can stretch to 14 hours. However, a trucker can make up to $35 an hour. But Hasty says in the world of fuel hauling, driving around a load of jet fuel actually isn’t as sexy as driving around your standard gasoline.

“I can’t attract them because they’re all getting pulled over there for up to $40 an hour to go haul gas,” Hasty says with more than a tinge of exasperation. “They’re doing $5,000 sign on bonuses.”

Even if he could wave a magic wand and have enough drivers to keep his fleet of rigs rolling, the supply issue extends beyond qualified people.

“You couldn’t get a truck now, or a trailer, if you wanted to, probably [for] a year,” says Hasty.

It’s hard to find drivers, trucks are on backorder, and then there are the regular customers who engage Hasty to deliver their fuel. If a fire sparks, he may want to assist and run a load to the planes or helicopters working on putting it out, but his standing orders still need to be delivered.

“It’s hard for me to screw over my regular customers just to go do this fire,” says a pained Hasty. “And I feel bad, don’t get me wrong. I do feel bad that I can’t help out, but I only have a certain amount of trucks and a certain amount of drivers.” 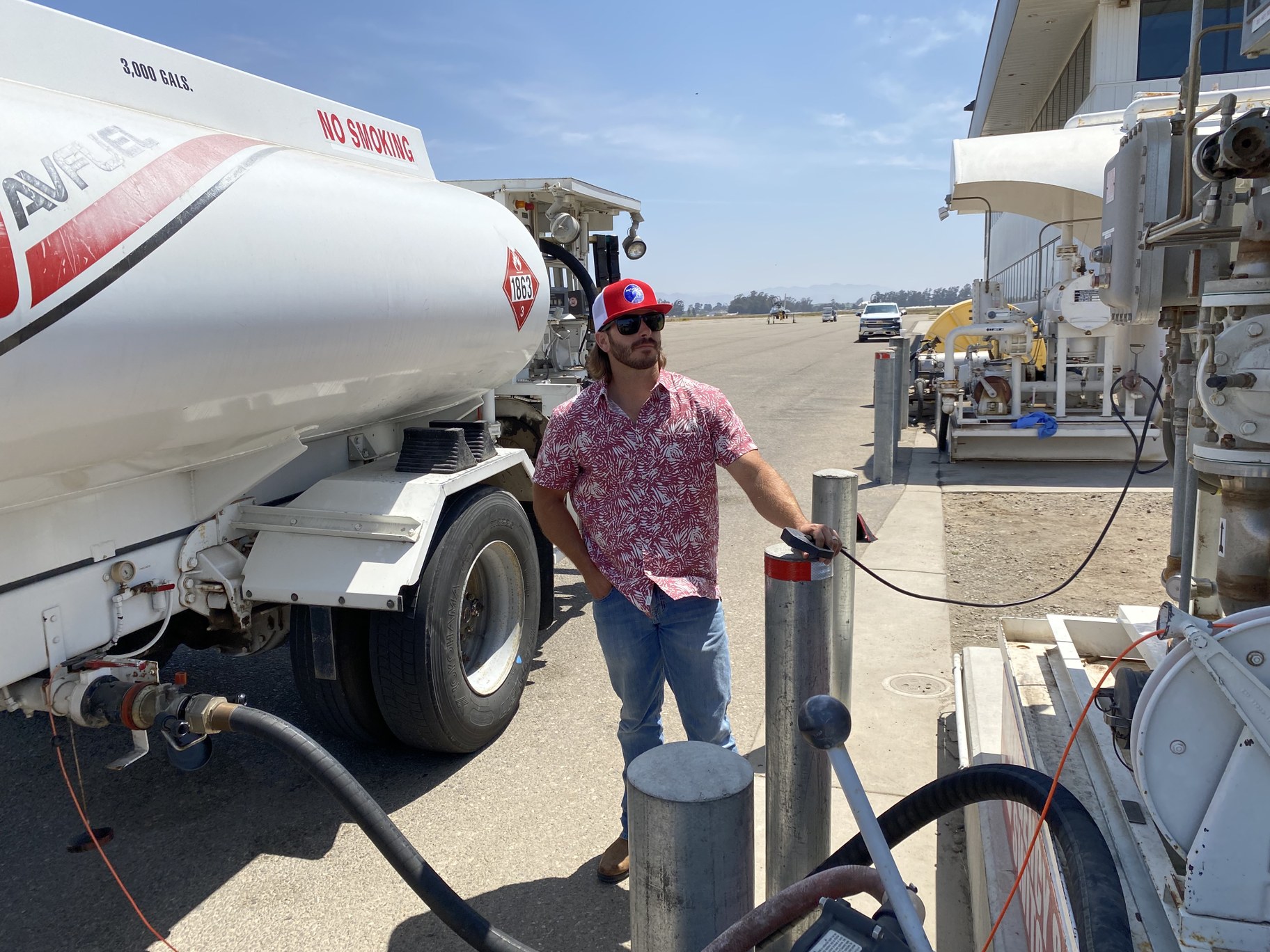 Chris Kunkle tops up one of several fuel trucks at the jet center. Kunkle says on a busy day when a wildfire is burning, they can go through 20,000+ gallons of fuel as the big tanker jets make drop after drop on the blaze. Photo by Matt Guilhem / KCRW

Back at the Central Coast Jet Center, fire pilot Ryan Curl is uneasy. He says if fuel disruptions are already causing aircraft to reroute in the Mountain West, there’s no reason to think the problem won’t migrate.

“We plan on it now. The later part of August, September, October is when the Southern California wildfire season really takes off,” Curl says. “We’re feeling the crunch up north right now, and it’s inevitable that the operation is going to move south, and I don’t see any reason for it to change.”

No matter what, officials will find a way to get the planes in the air and over the fires. It just might be a bit longer between drops. While bases like Santa Maria may be as “ready” and “prepared” as they can be, a little luck probably wouldn’t hurt.