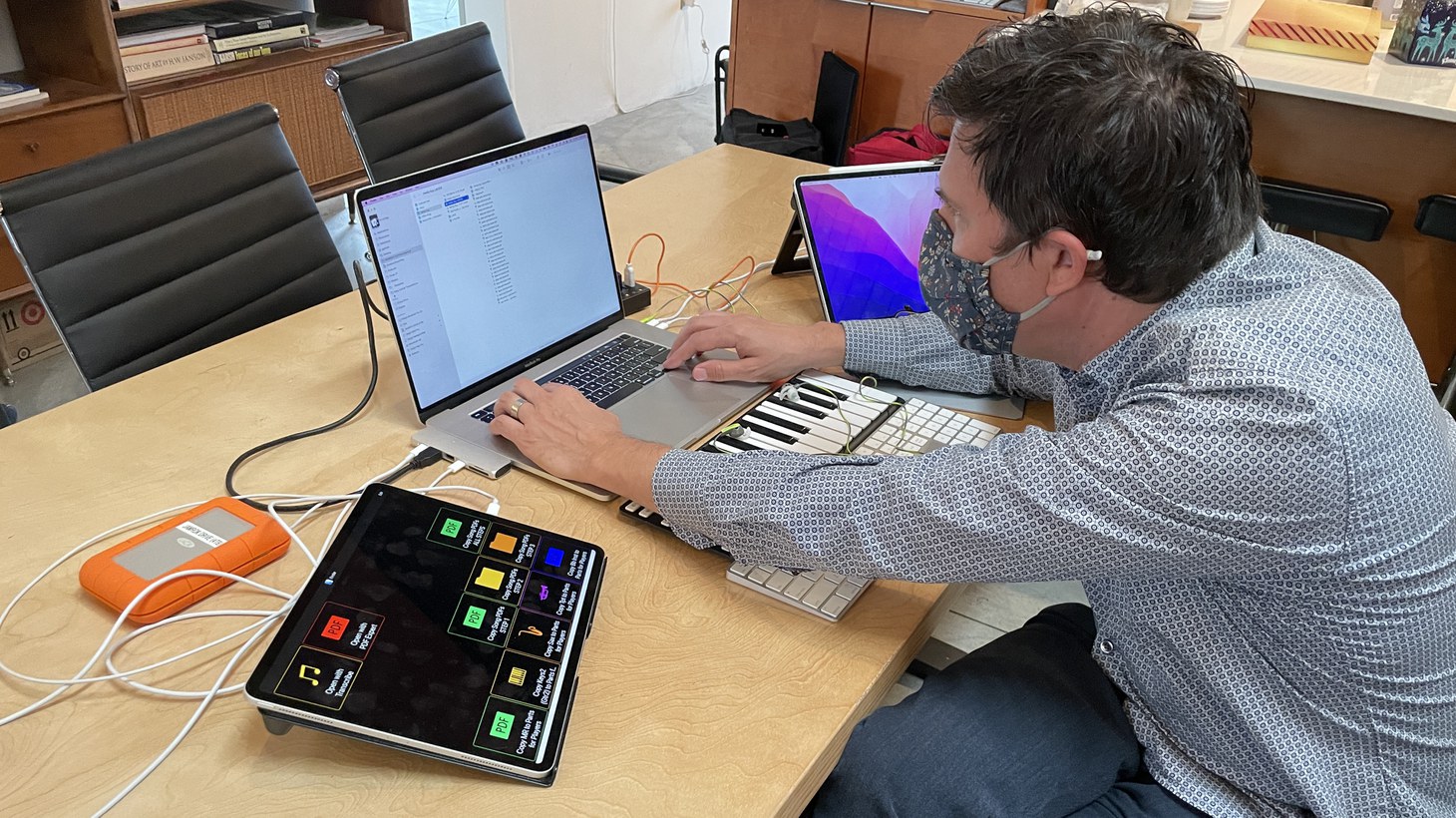 Greg Jamrock sets up his music production hardware on a shared desk at Procolo, a coworking space in Culver City. Photo by Benjamin Gottlieb.

At an empty parking lot atop one of Culver City’s prized commercial real estate zones, George Montgomery looks down at Hayden Tract, an industrial zone-turned-chic office space for creatives.“We just drove through four levels and no one is parked in the whole garage,” he says.

“You see that business over there?” He points to the outdoor patio space adjacent to the advertising agency Omelet. “You have this nice little setup of tables with umbrellas. Well, those have been there for two years. No one has used them.”

These are no casual observations for Montgomery — they’re clues to the future of his livelihood. Montgomery owns and operates a boutique coworking space called Procolo in Culver City. There were months that he couldn’t legally have anyone renting space from him, forcing him to consider moving his family out of Southern California. Things began to pick up again in 2021, but now Omicron has once again cast a cloud of uncertainty over his life.

“Office [space] is in a very, very strange place,” says Montgomery, who operates his business out of 15,000 square feet of space on Washington Blvd. “We're going into year three of organizations really defining how they can work remotely. And you look at the numbers, it hasn't had any negative impact on their ability to [generate] revenue at all.”

You can see that just by looking at the major employers who’ve yet to move into their new facilities in Culver City, says Thomas Aujero Small, the town’s former mayor. For example, take Apple’s new 550,000 square feet of space in two adjoining buildings. 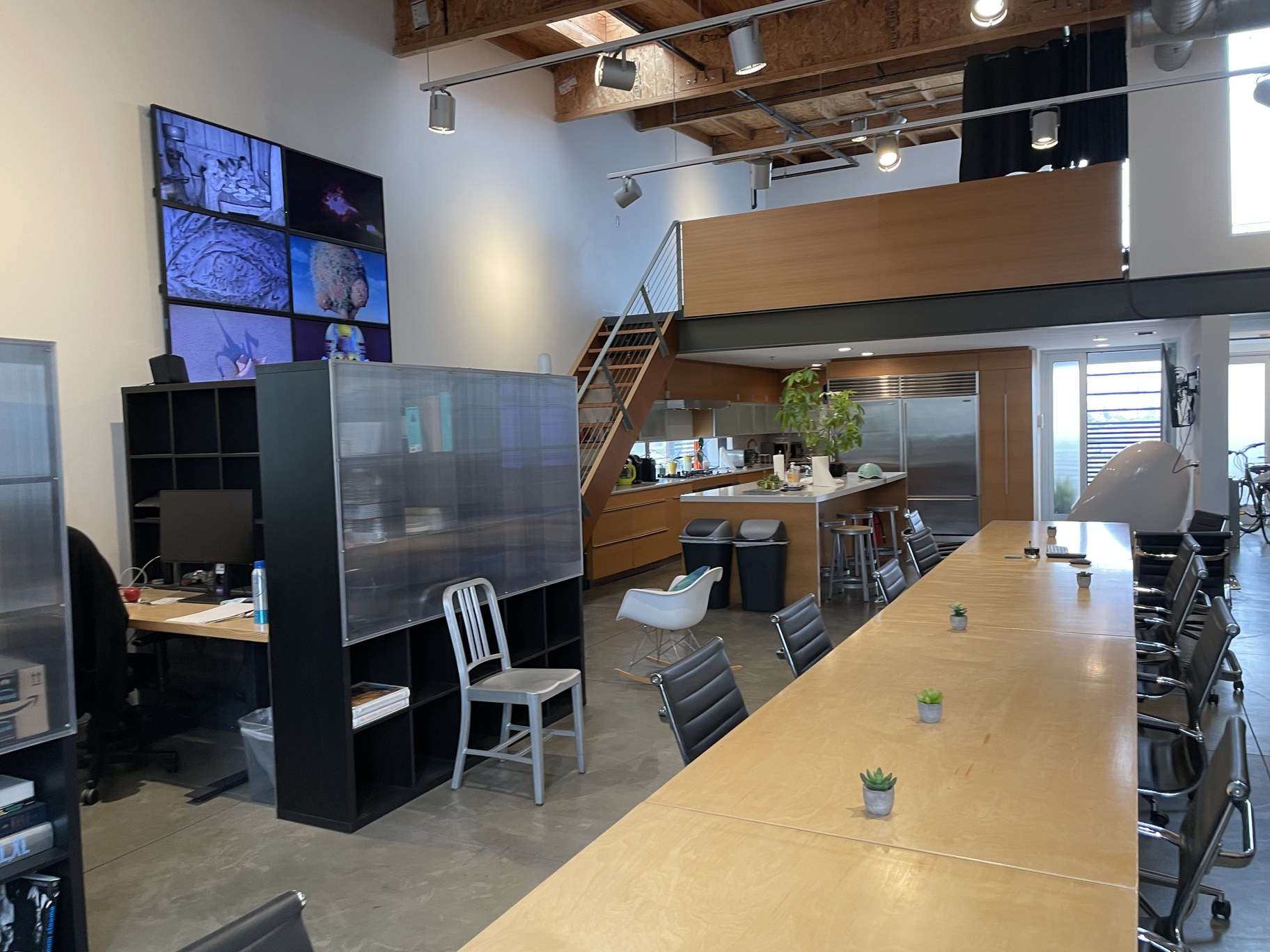 This is one of the shared offices at Procolo, a coworking space in Culver City. Photo by Benjamin Gottlieb.

“They haven’t occupied those buildings yet,” Aujero Small says. “We expected that in January. Now they have postponed that. The same thing with Amazon Studios, just a few blocks down.”

Many employers who use office space first saw the pandemic as having a short-term impact. But that’s no longer true, according to Spencer Levy, global chief client officer and senior economic advisor for Commercial Real Estate Services (CBRE). He says the Omicron variant has cemented pandemic-era changes to workforce habits. Workers, he says, are feeling: “We want more hybrid work, we want more work from home, and we want the workplace to be someplace we want to go, not need to go.”

And what happens to the empty offices if workers just don’t come back?

Converting the space to housing is one option, though Montgomery cautions that’s not as easy as it sounds.

“It's expensive to convert these into residential,” he says, pointing to empty office space in Hayden Tract. “Plumbing is probably the biggest issue. You may have room to have 20 apartments, but there's not necessarily 20 places to put a kitchen or a bathroom.”

A better option, he says, is a mixed-use model: apartments and retail to go along with — as you might guess — some coworking space for those times when being in-person makes a difference.