‘It’s the death of all hope’: Afghan Americans in LA share their anger and pain amid Taliban takeover A couple hundred Afghan Americans and their supporters gather outside the Federal Building in West Los Angeles for a candlelight vigil. Photo by Benjamin Gottlieb.

Anger. Hopelessness. Uncertainty. For many of the estimated 150,000 Afghan Americans living in the US, the deteriorating situation in Afghanistan has been difficult, if not unbearable, to witness.

At a recent vigil outside the Federal Building in West LA, a couple hundred Afghan Americans and their supporters gathered for a candlelight vigil to remember the lives lost during 20 years of war and U.S.-led intervention. 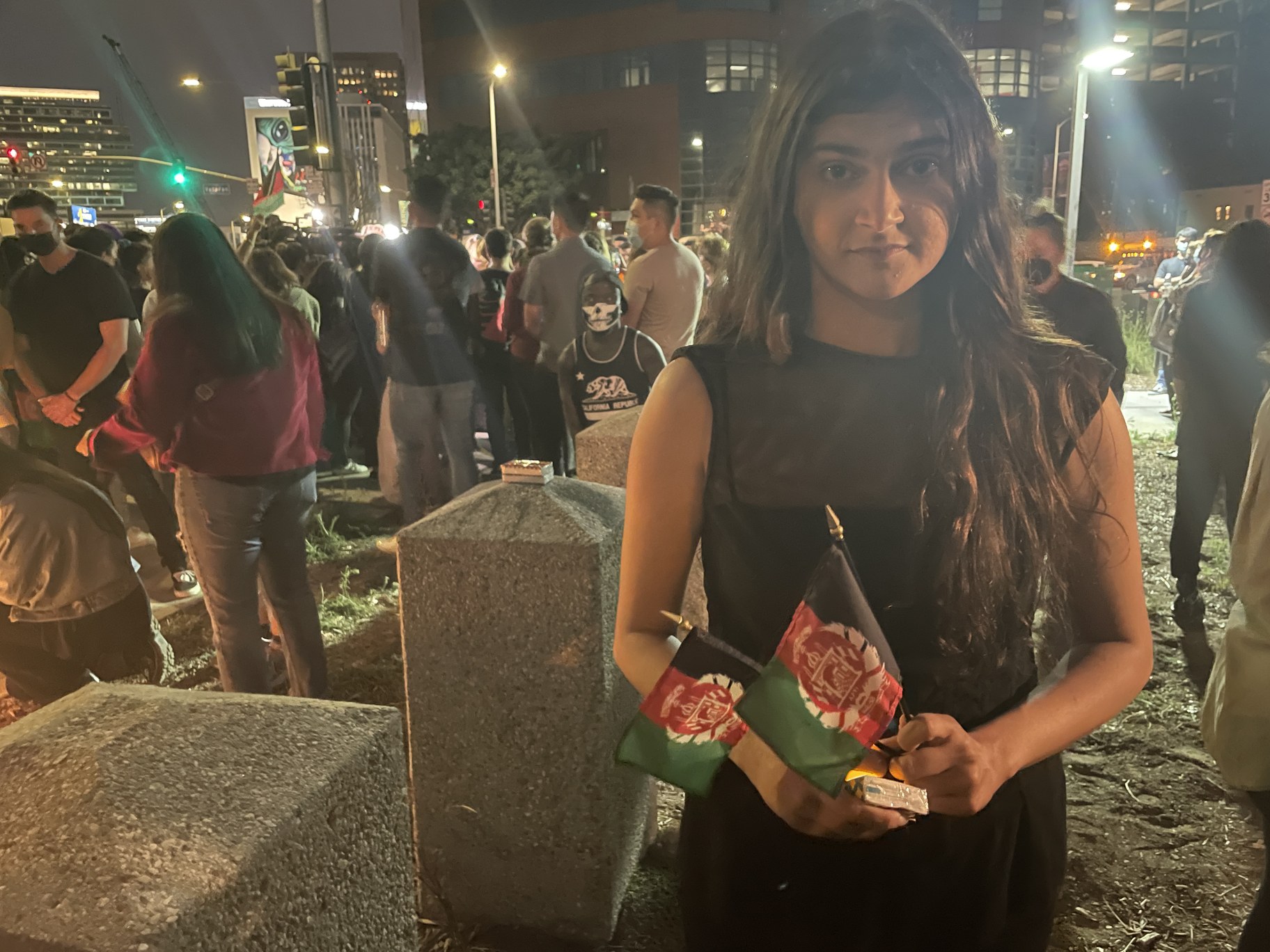 “I do have relatives back in Afghanistan: uncles, aunts, cousins. And it's probably been one of the most difficult things for us to watch. And especially for Afghan Americans. We kind of feel caught between two places because, as much as we're grateful to be here, all of us are dealing with so much survivor's guilt,” says Fallon Zuhal Ferguson. Photo by Benjamin Gottlieb.

Fallon Zuhal Ferguson: I am the daughter of Afghan refugees who fled [Afghanistan] during the Russian imperialist era [known as the Soviet-Afghan War] in the 1980s. Right now, I'm working with an amazing team in LA to put together vigils [and] protests, and make our voice heard across the city and beyond.

Benjamin Gottlieb: What has it been like for you to do this type of activism, given what’s happening in Afghanistan right now?

FF: Have you ever worked so hard at something your whole life? And then in one second, in a month, had it completely taken away? Shattered? You don't know whether your friends are okay, whether your family's okay. It's hard. It's been difficult for all of us.

You know, I'm one of the lucky ones where I have all of my direct family here, but I do have relatives back in Afghanistan: uncles, aunts, cousins. And it's probably been one of the most difficult things for us to watch. And especially for Afghan Americans. We kind of feel caught between two places because as much as we're grateful to be here, all of us are dealing with so much survivor's guilt. We ask ourselves, ‘Why couldn't we take everyone else with us? Why is it always our country that is always being taken advantage of and taken over?’ It's devastating.

BG: You mentioned a collective feeling of “survivor's guilt” among Afghan Americans.

FF: Yes. It's been heart wrenching. Frankly, I am so disgusted at how our people have been abandoned because that could have been me, that could have been any one of us here. But we're the lucky ones. We’re the privileged ones out of all this, we have no right to speak for the ones that are back there. All we can do now is focus on getting our people back, which is why we plead with the U.S. government and any of the neighboring countries to please open your borders to us. Let us through, give us expedited processing, give us visas, we’re civilians. We're humans, no one wants to live under the Taliban. No one wants to live under that kind of government.

BG: Would you have supported the U.S. government staying indefinitely in Afghanistan? Or at least longer than it did? 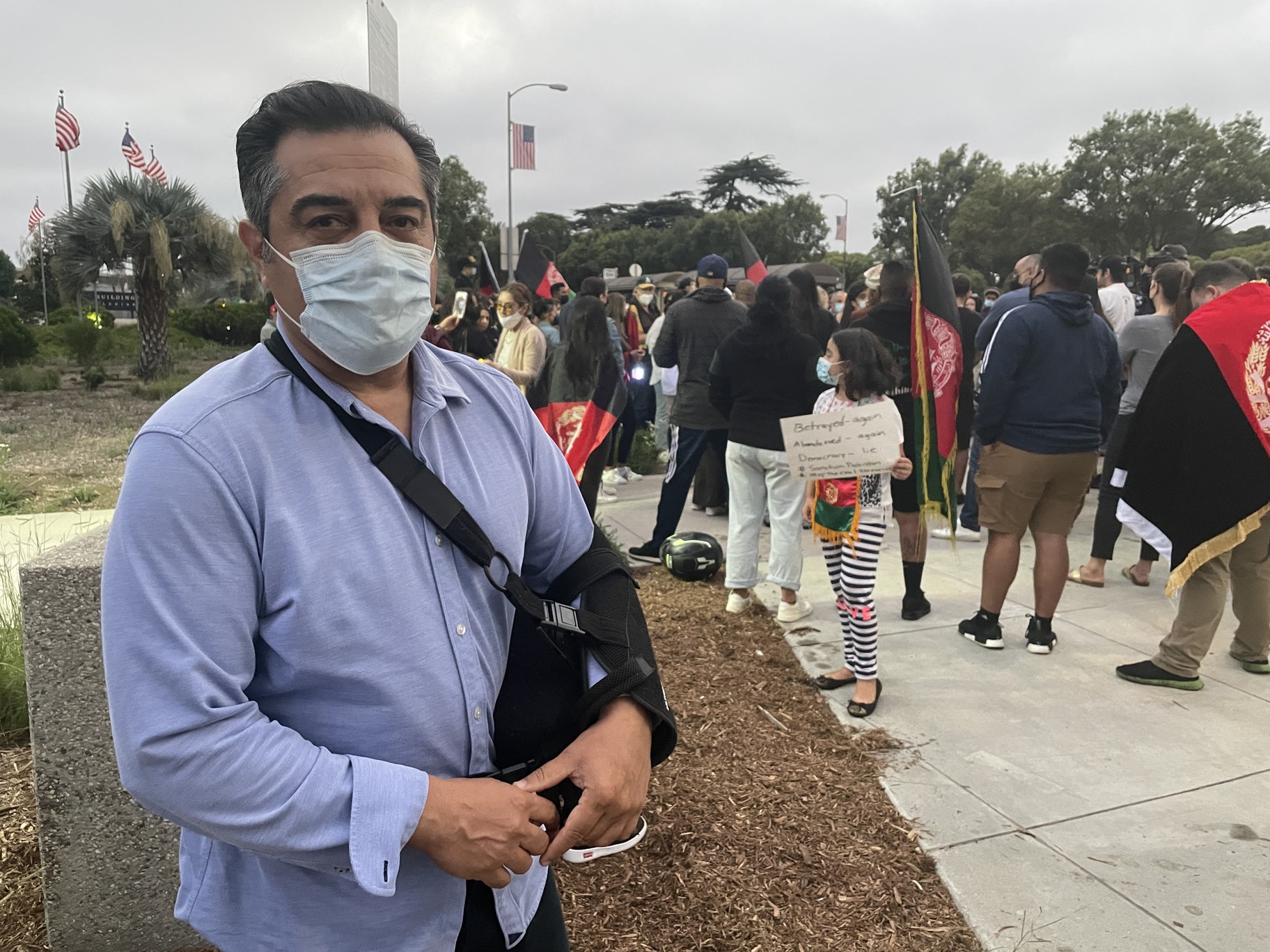 “It’s the death of all hope,” Dr. Dean Shezai says of the Taliban’s takeover in Afghanistan. “When you build hope for millions of women and then overnight take it away. And not just take hope away, but subjugate them, shroud them, put them behind walls, behind doors, there's nothing worse than that. That’s worse than death.” Photo by Benjamin Gottlieb.

Dean Sherzai: I am an American of Afghan descent. I grew up here for most of my life, but we always have had connections with Afghanistan because my parents and grandparents are from there. In 2002, I was asked to go back to Afghanistan to help out for a short period where I helped construct the nation’s health care system. The whole time I was there, we were thinking about improving the lives of Afghanistan’s women, because the suffering was being borne by women, whether it was death from pregnancy, whether it was death from infections, whether it was loss of life from other causes. And within a year, women went from the darkest of ages, to the most amazing, flourishing of human spirit you could ever imagine. Within a year, we saw women becoming teachers, professors, doctors, engineers, skateboarders, a surfing team in Afghanistan and a coding team and all these amazing, amazing empowered women throughout the country.

BG: And given your first-hand look at what life had become in Afghanistan, what do you think is next for Afghanistan now that the Taliban have taken control of the country?

DS: It’s the death of all hope. When you build hope for millions of women and then overnight take it away. And not just take hope away, but subjugate them, shroud them, put them behind walls, behind doors, there's nothing worse than that. That’s worse than death. In my view, in one fell swoop, we killed 16 million women, young girls that had hopes and won’t have hopes anymore. Women that were in positions of power, of influence, they will not have those positions. That's what happened in Afghanistan overnight with one bad plan. I'm not saying that we had to stay there for years and years to come. But we had the influence to make a proper transition. We chose not to.

BG: If I may, there’s not just anger in your voice, but despair too. Do you think the Afghanistan you helped build, even in a small way, is lost?

DS: The speed with which the Taliban took over the country actually gave them tremendous power. They actually think that they have a superpower behind them, they have some mythical influence. That's the calamity. Forget about ever trying to turn this around. It's going to take much more than a few thousand soldiers. So yes, I [feel] quite hopeless. 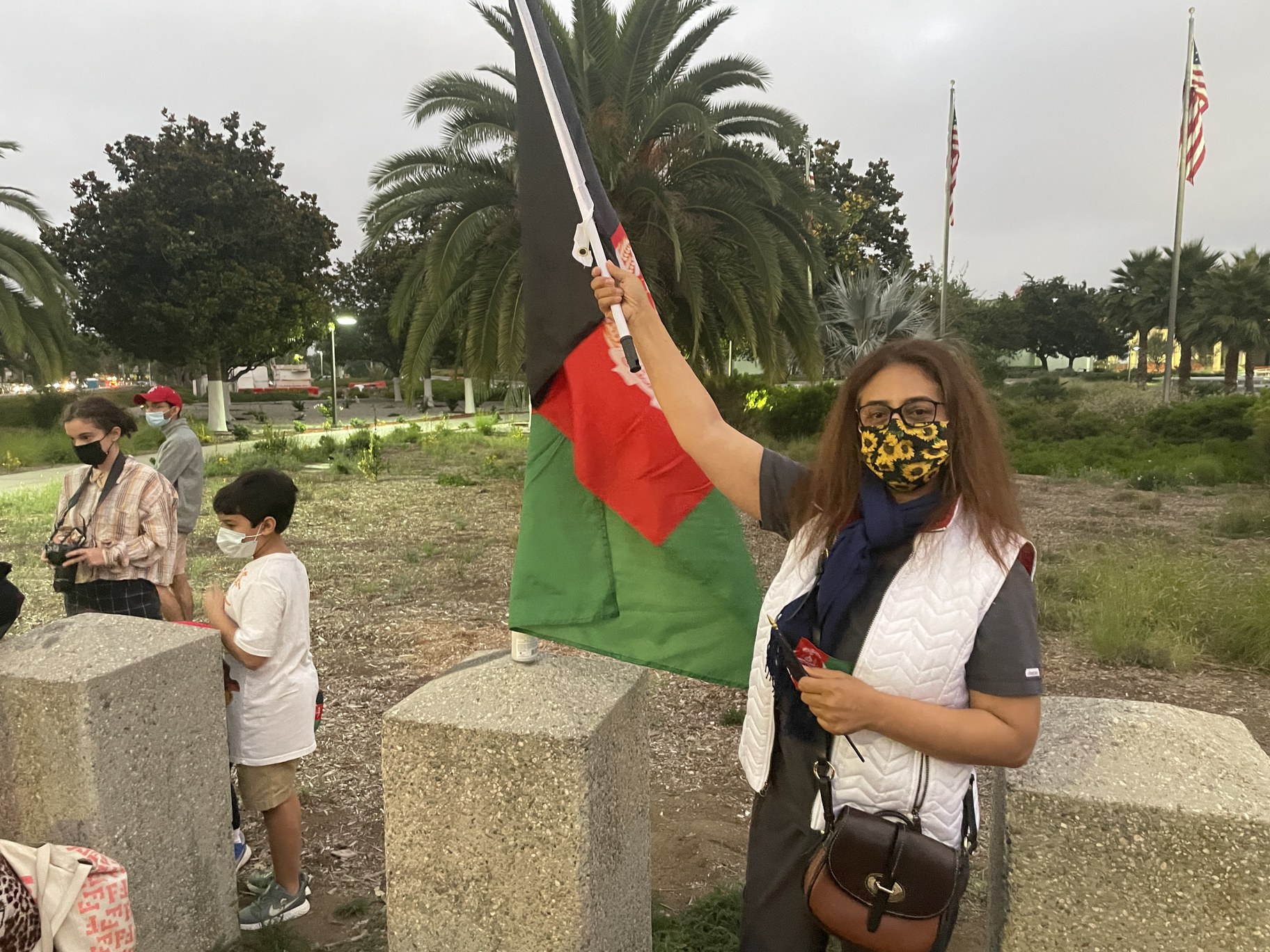 “The U.S. abandoned us. They left Afghanistan to Pakistan and [the] Taliban. … We are really disappointed in the national community, especially the United States,” says Hosai Afridi. Photo by Benjamin Gottlieb.

Hosai Afridi: I am here with my son, my daughters, my cousins’ kids. … The one holding the other Afghan flag, that’s my cousin.

BG: Here we are, outside the Federal Building, where there is freedom of expression, of speech. But for so many women in Afghanistan right now, much of the freedom they’ve enjoyed for two decades has been replaced by fear.

HA: It has. I [have been] so, so, so sad these past two days, [that] I cannot sleep. I cannot sleep. I imagine how these women, these mothers feel. They don't know who is going to knock on their door and enter their house. They don't care about what they're going to take, their wealth or their money. They're worried about their daughters and their sons,  and their husbands and their brothers that they're not going to be there in the morning. That's so sad. Imagine living like this every single second of your life. It's so hard. I can't even express my feelings.

BG: I’m sorry for striking a nerve. I can only imagine what this must be like for you.

BG: What do you think is next for Afghanistan?

HA: We feel abandoned. The U.S. abandoned us. They left Afghanistan to Pakistan and [the] Taliban. It's going to be the same situation as it was before. So we are really disappointed in the national community, especially the United States. They used Afghanistan, just like before, when they used Afghan blood to get rid of Russia. It feels like the same thing now.