Viewers of the late night show The Late Late Show with James Corden might be familiar with a regular bit called “Spill Your Guts or Fill Your Guts.” In the segment, Corden and his guest have two options: answer an embarrassingly personal question or eat something that many might find less than appetizing.

In a September 2016 segment, a few of the foods came from Asian cultures, including chicken feet, a thousand year egg (a preserved egg that ages in a mix of ash, rice hulls, and other compounds for weeks to months), and balut (a South Asian street food item that’s typically a fertilized duck egg eaten out of the shell). Some are considered delicacies.

TikTok creator Kim Saira is calling the segment “racist,” and is demanding that it be majorly overhauled or cancelled. She also wants Corden to formally apologize on air. The social media influencer of Asian American descent has not only built awareness on TikTok, but has also launched a change.org petition pushing for action. So far, the petition has gathered more than 40,000 signatures.

Saira says the segment was the first and last “Spill Your Guts” clip she watched.

One of the foods holds special meaning to her: balut.

“Balut is very rooted in my Filipino culture. I would go to the Philippines every year, and I would eat balut with my grandma and with my cousins. It’s a very sentimental food to me.”

She adds, “When I first watched it, I wasn’t mad, and I wasn’t as angry as I am now, but I was more so shocked and confused because I didn’t really understand why the foods that I grew up eating were being called disgusting,” recalls Saira. “In 2021, we’ve seen the exponential rise in anti-Asian violence and hate crimes, and to my absolute surprise, [the segment] is still on the air,” Saira says.

While her push to raise awareness started online, she’s since taken action offline and demonstrated with others outside The Late Late Show’s studio on Thursday. They ate Asian food to send a message to the program. 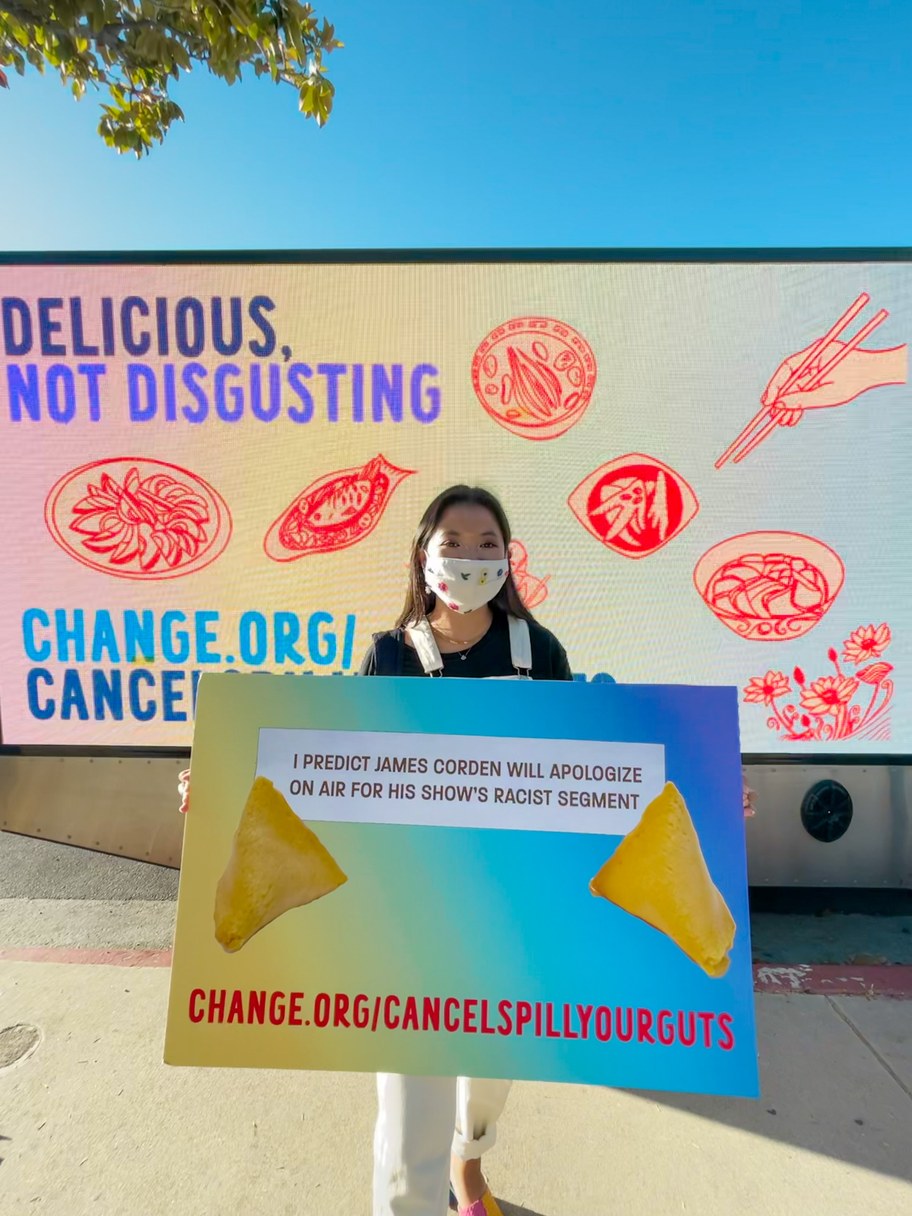 Saira holds a demonstration outside of CBS Television City. She and others carried signs highlighting an online petition to change or cancel the “Spill Your Guts” segment has gotten more than 40,000 signatures. Photo courtesy of Kim Saira

In an interview with Howard Stern last week, Corden addressed the issue, saying, “The next time we do that bit, we absolutely won't involve or use any of those foods.”

That’s not good enough for Saira.

“I feel like it is a non-apology, and I feel like there is no accountability on his end,” she says.

While Saira is angered by The Late Late Show’s use of some Asian dishes in its “Spill Your Guts” segment, the bit draws on foods from around the world that some people or cultures consider delicacies. Grasshoppers, tongue, pickled pigs feet, and blood-based foods have all appeared. When Corden, who’s British, took the program to the UK, he featured the notorious Scottish dish haggis (sheep offal boiled and served in a sheep’s stomach).

While some foreign delicacies are included in the lineup, items like cod sperm, beetle marmalade toast, and sardine smoothies are also included.

“I think that anyone can have an opinion on whatever food,” Saira says. “I’m not knocking anyone’s opinion. All I am saying is that this is a man who obviously isn’t partaking in a lot of these cultures that use these foods. He is exposing them in such a negative light, that ultimately will shift perceptions of viewers who aren’t familiar with these foods.”

Although many viewers might not take issue with Corden’s comedy, Saira says he’s crossed over from funny to offensive.

“I think that the line was really drawn when he decided to mock foods that are used in predominantly Asian cultures,” she says. “There are ways to go about comedy that doesn’t offend or is culturally insensitive.”

KCRW reached out to CBS and The Late Late Show for their take on this issue but we didn’t hear back.