President Barack Obama won a second term. The House Republicans kept their majority. And the Reagan coalition that Mitt Romney depended on to win Election 2012 appears to have disappeared. Was Election 2012 a vote for the status quo? Left, Right and Center hosts Matt Miller, Bob Scheer and Matthew Continetti come to the table to resolve the question of what happened, and what happens next, now that a wild and expensive election season is behind us. This is the definitive post-mortem of the presidential race. Lively, smart and sometimes irreverent, they take on everything from the Groundhog Day tax debate to Nate Silver's math. This special broadcast captures LRC's live roundtable at the Broad Stage in Santa Monica on  Sunday, November 11, 2012.

This special hour-long broadcast airs from 2-3pm and repeats from 7-8pm. 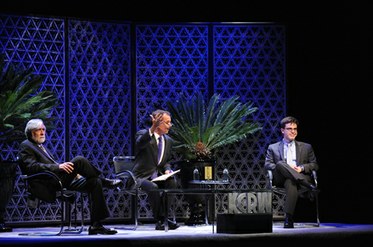