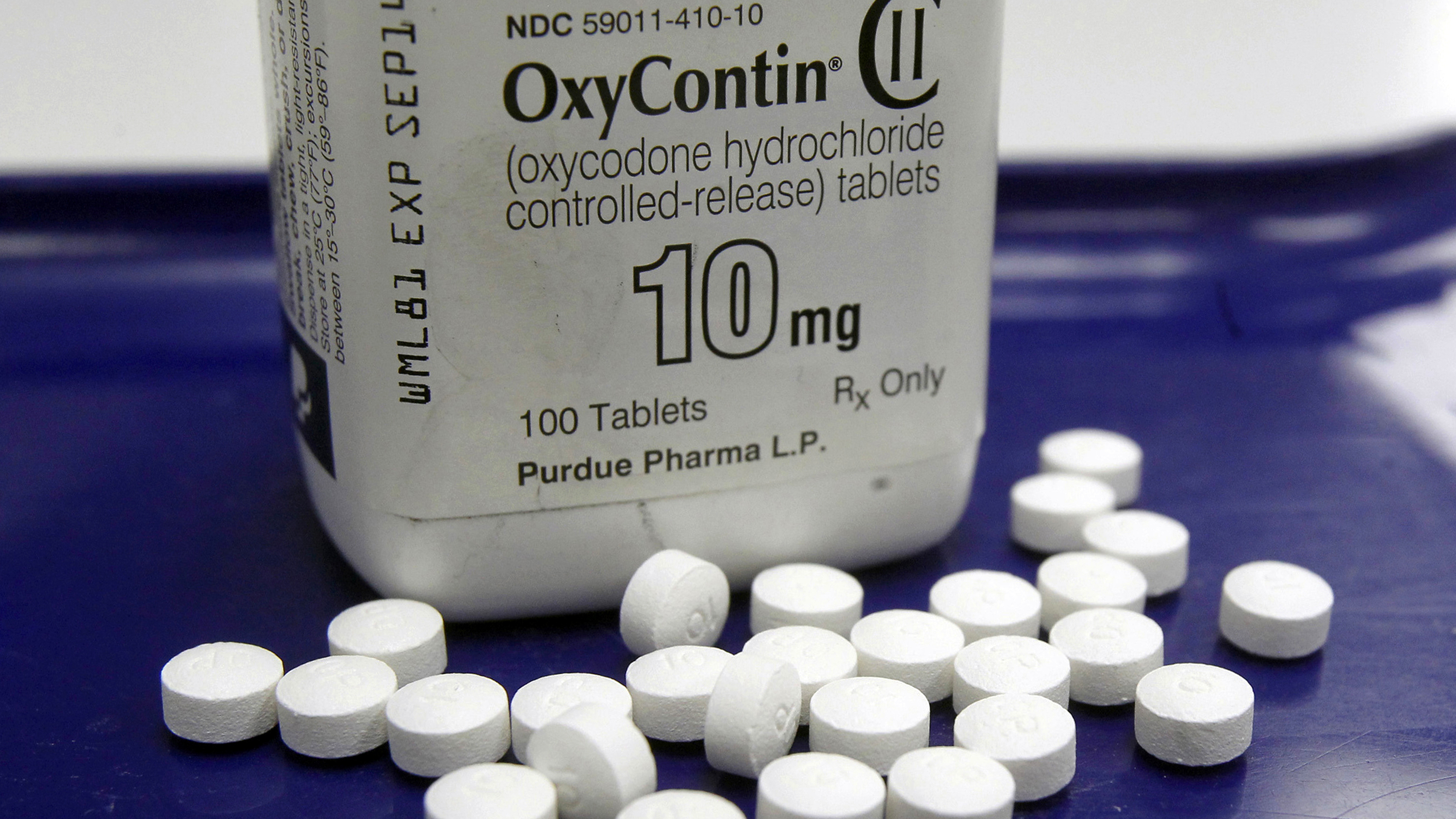 Purdue Pharma, the maker of OxyContin, is facing thousands of lawsuits seeking to hold it accountable for the opioid crisis. Photo by Toby Talbot - AP

The family that owns Purdue Pharma, maker of Oxycontin, has agreed to give up "the entire value" of the privately owned firm to settle claims that Purdue played a central role in the nation's deadly opioid epidemic.

That's according to a spokesperson for the firm, who detailed the Sackler family's offer in an email sent to NPR on Monday.

"Additionally, the Sacklers have offered $3 billion in cash as part of the global resolution," wrote Josephine Martin, Purdue Pharma's head of corporate affairs and communications.

This is the first time Purdue Pharma or the Sacklers have publicly disclosed elements of their negotiating position, though the company had acknowledged settlement talks were underway.

According to Martin, the Sacklers also offered to contribute another $1.5 billion from the sale of Mundipharma, a company owned by family members.

The email was sent after NPR reported that the family had balked at a demand from state attorneys general that they pay roughly $4.5 billion out of their personal wealth.

"We needed more security on the part of the Sacklers that the money they were pledging, they would in fact pay," said Josh Stein, North Carolina's state attorney general, speaking on Morning Edition.

"And we didn't have that commitment and the Sacklers rejected those proposals," Stein said.

Over the weekend, Stein and other state attorneys general declared that talks with the Sacklers and Purdue Pharma executives had reached an impasse.

But in her email, Purdue's Pharma's Martin disputed the suggestion that proposed pay-outs would not affect the personal fortunes amassed by members of the Sackler family through the sale of prescription opioids.

"As 100 percent owners of Purdue, this obviously constitutes their personal wealth," Martin wrote, referring to pay-outs the Sackler family agreed in principle to make from their various assets.

The New York Times had previously reported some of the details of the proposed national settlement between Purdue Pharma and thousands of plaintiffs suing the firm. This is the first time, however, that the company has commented or confirmed the broad outlines of the deal.

In a separate email to NPR, Purdue Pharma also said the drug firm still hopes to achieve a settlement, rejecting the claim by state attorneys general that talks had ended.

"Purdue Pharma believes a settlement that benefits the American public now is a far better path than years of wasteful litigation and appeals," the statement said. "Those negotiations continue and we remain dedicated to a resolution that genuinely advances the public interest."

The drug firm acknowledged last March, however, that filing for Chapter 11 is one of the strategies being contemplated if a settlement can't be reached.

The proposal offered by attorneys general would also have forced Purdue Pharma into a structured bankruptcy proceeding, while dissolving the Sacklers' overseas opioid business.

Overdose deaths linked to prescription opioids have killed more than 218,000 Americans since the addiction crisis began in the late 1990s, according to the Centers for Disease Control and Prevention.

Over two decades, opioid sales generated billions of dollars in profits for the company, making the Sacklers one of the richest families in the U.S.

If Purdue Pharma does file for bankruptcy without first reaching some kind of structured deal, it could take years to sort out the remaining value of the company's assets and then determine who's first in line for compensation.

Pressure to reach a settlement is also intensifying because a federal opioid trial involving Purdue Pharma and more than 20 other drugmakers, distributors and pharmacy chains is set to begin next month in Cleveland.

While that legal process moves forward, state attorneys general have promised to continue pursuing the Sacklers personally to recoup profits the family received from opioid sales, even if Purdue Pharma seeks Chapter 11 protection.

"I won't let them get away with their crimes," Pennsylvania Attorney General Josh Shapiro wrote Saturday on Twitter. "I will sue them personally, so that we can dig into their personal pocketbooks."

According to the newspaper, those negotiations involve possible civil penalties tied to federal probes of Oxycontin sales, but could also include criminal charges using statutes normally used to prosecute drug dealers.