Poll: Democrats Most Like Warren, But Voters Overall Are Lukewarm On Democrats, Trump 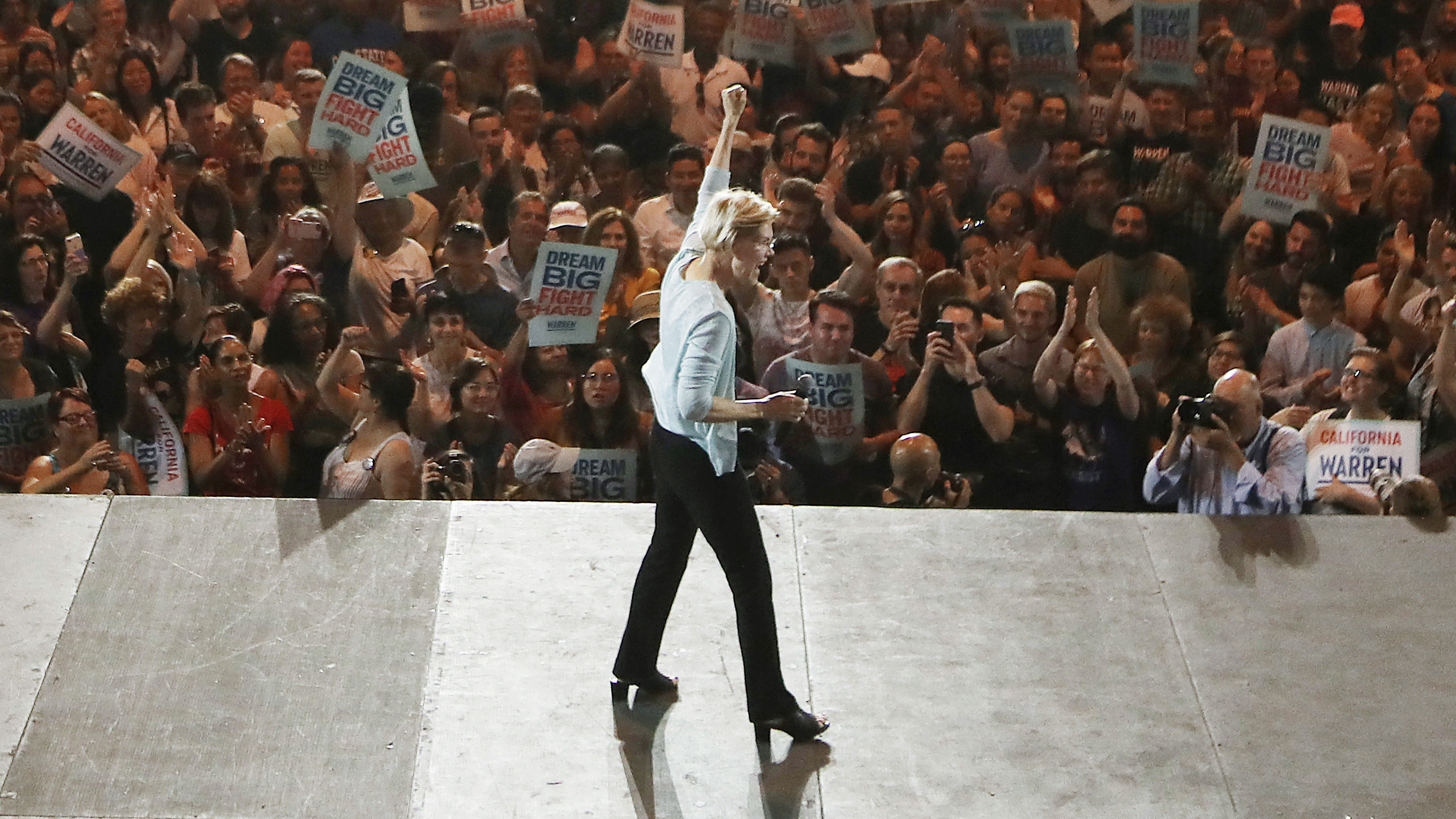 Elizabeth Warren is on the rise among Democratic voters, but she and other Democrats are less popular with the overall electorate, raising concerns about a bruising primary that could go on for the better part of the next year, a new NPR/PBS NewsHour/Marist poll finds.

The survey also finds President Trump continuing to struggle, with economic concerns seemingly starting to affect his standing, leaving a cloudy picture about the 2020 presidential election.

Here are some key findings from the poll and how the results indicate what's ahead in 2020:

Warren on the rise

Warren finds herself in a strong position with Democratic voters ahead of Thursday's Democratic presidential debate.

Seventy-five percent of Democratic voters now say they have a favorable impression of Warren — that's up from 53% in January, a 22-point jump from the last time the poll asked the favorability of candidates or potential candidates.

What's more, the percent of those saying they have a negative impression has gone down from 17% to 11%.

"Elizabeth Warren seems to be on the verge of starting to make significant and serious inroads into this contest," said Lee Miringoff, director of the Marist Institute for Public Opinion, which conducts the poll. He added, "Heading into the debate, she's very well-positioned."

Former Vice President Joe Biden, who leads in most national polls of the Democratic contest, is also well-liked, but he has seen a decline since January — 71% of Democrats say they have a positive impression of Biden, a 5-point drop, and 22% don't, an 10-point increase in his negative rating.

"One of the initial senses of what Joe Biden presented was that he seemed to be less of a risk," Miringoff said, "but his performance so far has not been gaffe-proof, and as a result, people are not as comfortable and that opened up the door for others, and particularly Warren."

Biden has been taking most of the slings and arrows of his Democratic opponents, given his lead in the race, and his campaign would argue that he has held up well considering.

Sanders popular with the base but not the general electorate

Bernie Sanders, who has retained his loyal following, has seen an increase in his favorability rating among Democrats since officially declaring his candidacy. The Vermont senator has gone from 57% positive in January to 66% now. But it's a different story with the broader electorate: 55% of voters say they have an unfavorable impression of Sanders, while just 38% have a positive one.

"Bernie Sanders having over 50% negative has to be concerning to Democrats looking for electability," Miringoff noted.

California Sen. Kamala Harris was also tested, but the difference of views of her between the primary and general election electorate are most striking. Harris has gone up 20 points with Democrats, as she has increased her name recognition, going from 36% favorable in January to 56% now. Back then, more than half of Democrats were either unsure or never heard of her. That's down to just a quarter of Democrats now.

So, she's worn well with Democrats, but not with a general electorate so far. Among registered voters, she has a 31% favorable, 42% unfavorable rating. (The poll did not test the favorability of the candidates with a general-election electorate back in January.)

"When you look at the national electorate," Miringoff said, "there's still a lot of work to be done on the part of Democrats to start attracting a positive reaction."

How the candidates fare with a general-election audience could be critical, as Democrats are increasingly saying beating Trump is more important than whether a candidate shares their position on most issues. In this poll, 58% said that, an increase from 54% in July and 46% in June.

President Trump doesn't fare much better than his potential Democratic opponents. His overall approval rating is low (41%), a near-record number of people "strongly disapprove" of the job he's doing (45%), a record number disapprove of his handling of foreign policy (56%) and a majority say they will "definitely" vote against him in 2020 (52%).

What's more, while the economy is buoying Trump — 51% overall and 53% of independents rate it as excellent or good — he has seen something of a bad economic summer. While the economy is still growing and unemployment is low, economic forecasts have turned gloomy with warning signs of a coming recession.

Trump's economic handling has taken a hit. More now disapprove (48%) than approve (47%) of it, a turnaround from July when a majority (53%) approved of his handling of the economy.

Despite all that, more Americans think Trump will win reelection (46%) than lose (37%).