It 'Feels Like A Graduation': Phoebe Bridgers On 'Punisher' 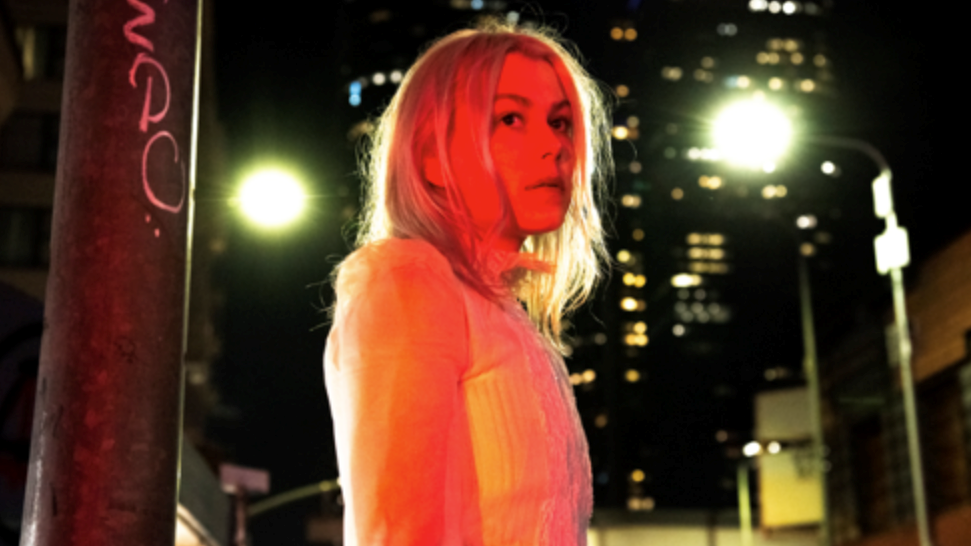 Phoebe Bridgers is one of the most prolific young songwriters to emerge in the last several years. Her second solo album, Punisher, is out now. Photo by Frank Ockenfels - Courtesy of the artist

Phoebe Bridgers is the first to admit that she's not reinventing herself on her new album. "There's nothing avant-garde about it," she says of Punisher, her second solo record and fourth major musical project in the last three years. Even so, there's a quiet, assertive power to Punisher. It's an album that balances her myriad sensibilities: the observational folk songwriting of her instant-classic 2017 debut, Stranger in the Alps; the smart and piercing work of boygenius, her 2018 EP with Julien Baker and Lucy Dacus; and the slacker rock of her self-titled debut with Conor Oberst, Better Oblivion Community Center.

In fact, the list of indie musicians Bridgers hasn't collaborated with might be shorter than the list of the ones she has. Punisher features appearances from all of those previous collaborators, plus more heroes from what Stephen Thompson calls "the Phoebe Bridgers Cinematic Universe": guest vocalists Baker, Dacus and Oberst; guitarist Christian Lee Hutson; producers Tony Berg and Ethan Gruska; Blake Mills; bandmates Marshall Vore, Harrison Whitford, Emily Retsas and Nick White. Even her tour manager, Jeroen Vrijhoef, lends gravelly vocals to Punisher's lead single, "Garden Song."

Bridgers' ever-expanding musical peer group provides an odd contrast to Punisher's themes: missed connections, the tension between the inner and outer self, the lonely ache of watching things end.

"I felt very much like the outsider," she says of the time she first began writing songs, "and, yeah, maybe that theme has continued throughout my music."

Punisher was originally supposed to be released on June 19 — or Juneteenth, the day commemorating the official end of slavery in the United States — but Bridgers opted to drop it a day early.

"I'm not [delaying] the record until things go back to 'normal' because I don't think they should," she wrote Thursday. "Here it is a little early."

The decision echoes the sentiment Bridgers expressed to NPR when she was interviewed last week.

"I'm trying really hard to put it out and simultaneously not make what is happening on earth about me," she said. "I just hope to do what I can and direct people to the charities that I feel are important. L.A., specifically, has so much work to do; it's so horrible here as far as policing."

NPR's Rachel Martin spoke to Phoebe Bridgers about stealing ideas from her favorite artists, the ways collaboration pushes her to be her best self and the nutritionist's visit that inspired one of her most evocative lines.

Rachel Martin: You talk about this idea of being solidly within the norm, but feeling somewhat to the side of it. Does your new album fit within that frame?

Phoebe Bridgers: I don't think that I have that outlandish a music taste, and I don't think I did anything super shocking. I like my own music, but I don't think that I'm breaking any boundaries. I think I'm just discovering how to reference a hundred things at once that I've always loved, like genre-wise just leaning in really hard and making intense references to other music. There's nothing avant-garde about it: It's a singer-songwriter record, even though there's kind of a metal section. I think I'm pulling from a lot of different places, stealing from a lot of different people.

That's the nature of art, right? Can you explain how you nod to someone who has been a musical influence in your life without totally appropriating it or ripping it off? How do you strike that balance?

Like they say: Steal from as [many sources] as possible, so that you're not just stealing from one person. I think that's what's beautiful about music, everybody stealing from each other. For example, I'm obsessed with Elliott Smith, and my way of stealing from him is to double my voice. We have no similar vocal tone whatsoever. It's just a slight little homage, and I love the way that it sounds, and I think a lot of people do that. Or for example, there's a song on the album that's pretty heavy on the vocoder and we were referencing like, Imogen Heap and everyone who's used it as an instrument. With those kind of production things, it feels very fun.

Lyrically, I steal from a couple people and try to pass it off as a reference. I have a "rebel without a clue" line, which is a Replacements line that Tom Petty already stole, which is hilarious. So I'm just stealing it again.

I think that goes into collaborating, where you save your best ideas to show off, to be a great version of yourself.

Besides the stealing part, you actually make music and collaborate with a lot of other artists. Why is that important to you? What do you get from that?

Especially with Conor Oberst, who I'm in a band with, I have stolen from him a lot of my life. I've actually kind of straight up plagiarized him before, and he roasts me about it all the time.

He's clearly cool with it.

Yeah, he's pretty cool with it. He reserves the right to make fun of me as much as he wants. But I think that my favorite part of collaborating is — It's very uncertain when I'm by myself. I feel like this with my personality, too, where I don't quite feel like a person unless I'm performing myself for someone a little bit. I'm trying to work on it through therapy and whatever. I feel like the best version of myself when I have a crush on someone, or when I'm hanging out with a bunch of people who have never been to LA before. I'm like "You know what we should do today? You know what's a really fun thing that I would never do by myself, but I'll do with you guys?"

And I think that goes into collaborating, where you save your best ideas to show off, to be a great version of yourself. I've been so lucky to be treated like a peer by people that I really look up to — Julien Baker, Lucy Dacus, Conor Oberst, Matt Berninger — that I think that it's fun to kind of nerd out with a bunch of people over an idea you came up with together. I think that's the best part, instead of just second-guessing yourself in your house. And when I write by myself now, forever, I will always send all those people my ideas and ask "Is this good?" so that I can benefit from the collaboration when I'm not technically collaborating.

It reminds of something you were quoted as saying in The New Yorker that you "trick yourself into telling the truth" in your songwriting. Can you say more about what that means?

It's pretty literal. I seriously will give myself a homework assignment and say "This would be an interesting take to have. I don't really care about this person this much, but for the song it's more interesting." I feel like I'm making it up, or I'm combining a bunch of experiences, and then two years later I realize "Oh my god, I was telling the truth."

The weirdest example recently is my song "Kyoto." I was talking to my friend Marshall [Vore], my drummer, who is my go-to guy as far as bouncing ideas off of each other, and we were talking about how similar our dads are. They're both from Idaho, just kind of like truck culture dads. And he was laughing about how early dads like that make you drive, how you drive way too early. And I was like "Oh that's such a sad lyric, I'm going to put that in." Then I was driving way after finishing the song, driving through Pasadena past the Rose Bowl and realizing I drove in the Rose Bowl parking lot when I was way, way, way too young and it's like a weird repressed memory. I didn't even realize I was telling the truth about myself, I thought I was making a reference to Marshall's life.

Can I ask you about "Kyoto"? It's about your father, someone who you've had a complicated relationship with. Had you written about him before?

Yeah I had. There's a song on the first record that's kind of about it. And this record, in a lot of ways, kind of feels like a graduation, but I feel like I'm trying to be self-aware about my resentments. I feel like I have strong opinions weakly held. So that's what "Kyoto" is about. There's a lot of just straight up hatred and resentment on the first record — about all kinds of people — and then on this record I'm exploring just how quickly that all goes away with a little bit of examination.

"Strong opinions weakly held" — that's a great line. If it's not in one of your songs yet, it should be.

Actually, it's stolen from a journalist buddy of mine, P.J. Vogt. He said that to me once and I was like "Oh no! You see me!" It was horrible.

Do you ever get inside your own head, though, about the details? Do you start to write a song about something super specific and then be like, this is not an interesting detail?

I don't think that's happened yet. The weirdest thing in the specificity is that it sounds like poetry a lot of the time. For example I have a song called "Garden Song" where I say "The doctor put her hands over my liver and told me my resentment's getting smaller." And I get asked about that lyric all the time because it's so weird, and I'm like "I don't know. I went to see a nutritionist and I thought that was a weird thing to say to somebody." It's just a true story.

Your doctor really said that?

I mean, "doctor" is a loose term, but yes. Sometimes I'll kind of write a joke song. Like when I get frustrated, I'll start joking to myself and saying "This will never be a real lyric." And I always end up liking some piece of it. "Kyoto" is kind of like that. I was like "This is embarrassing. I can't say that. This is just a joke that I'm telling myself." And then I end up falling in love with it.