For 'Ike,' A Monument Unlike Any Other: Eisenhower Memorial Is Dedicated In D.C. 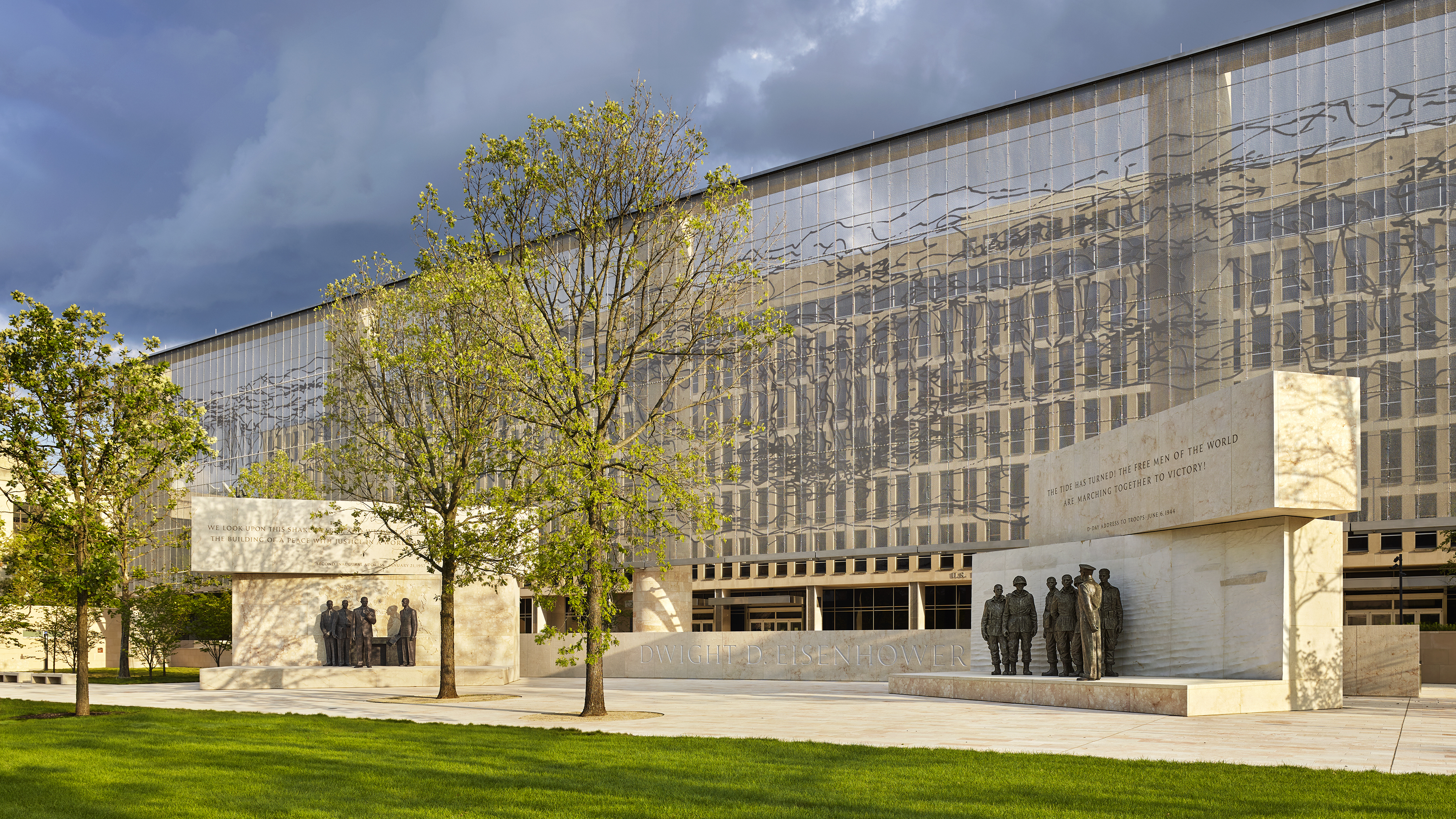 The Dwight D. Eisenhower Memorial in Washington, D.C., will be dedicated on Thursday. A stainless steel, woven "tapestry" made by artist Tomas Osinski stands behind the statues and depicts the cliffs at Normandy. Photo by Alan Karchmer - Eisenhower Memorial Commission

Dwight David Eisenhower was one of the towering figures of the 20th century: A five-star general, he led the D-Day invasion and helped defeat the Nazis. A two-term president, he brought stability to postwar America.

Since his death in 1969, memories of the man called Ike have faded. But this week, the dedication of an Eisenhower Memorial in Washington, D.C., will bring him vividly back to mind.

This memorial is not like any other presidential monument in Washington. No sky-piercing white obelisk (George Washington), no massive, looming statue (Abraham Lincoln.)

The Eisenhower is just a bit above street level with somewhat larger than life sculptures. It sits on 4 acres of a nondescript street near the National Mall and the Air and Space Museum. Modern and clean, with geometrical shapes, it's designed by star architect Frank Gehry.

"To be creating something that has so much gravitas for the world — whew! In the end it's a great honor to be part of it," Gehry says.

An open-air plaza with two tableaux, set several feet apart, highlights major points of Ike's career. On one, bronze sculptures of General Eisenhower, talking with his men before D-Day. On the other, President Eisenhower standing with three assistants in front of a map of the world carved into the limestone wall.

Behind the tableaux, a screen — Gehry calls it a "tapestry" — made of woven stainless steel cables is patterned with an outline of the cliffs of Normandy. This scrim runs the length of the memorial, softens the dull Department of Education building behind it, and, lit at night, makes magic, says Washington Post architecture critic Philip Kennicott.

"I went down there one evening right around sunset and they were just turning the lights on and it was really spectacular," Kennicott says.

Gehry didn't know much about Eisenhower until he read Stephen Ambrose's biography, Eisenhower: Soldier and President. He liked Ike's modesty, his diplomacy, how he always gave credit to others and didn't grandstand. Gehry got a kick out of what Ike said about the kind of memorial he'd prefer.

"He had said to his family that he didn't want to be on a horse," Gehry says, laughing. "And I understood that. I just fell in love with the guy."

Gehry had to jump through several hoops to get the memorial approved. There were Eisenhower's family, various commissions and arts groups all wanting changes. It took forever.

Much of the fuss was about another sculpture in the plan — a life-size statue of a young boy, maybe 15, sitting the way boys do with knees up, arms around them, looking into the distance. It's Ike as a Kansas kid. He never forgot where he came from.

"He referred to it many times, 'I'm the barefoot boy from Abilene who never fully leaves,' " says Gehry.

Gehry's original design put the boy behind and between the two tableaux — General and President. No, said a chorus of critics. Now it sits on a far side, looking toward the sculpted men.

It's very moving there. The boy looks toward his future. At what, exactly, he can't know — what he will become. It's a statement about hope.

After this week, kids coming to the Eisenhower Memorial can think, "I could do that! That could be me someday."

In Ike's day, that was true. It can be true today, too.

In the audio, as in an earlier Web version of this story, we incorrectly state that the statue of Abraham Lincoln at the Lincoln Memorial in Washington, D.C., is made of bronze. It is made of marble.