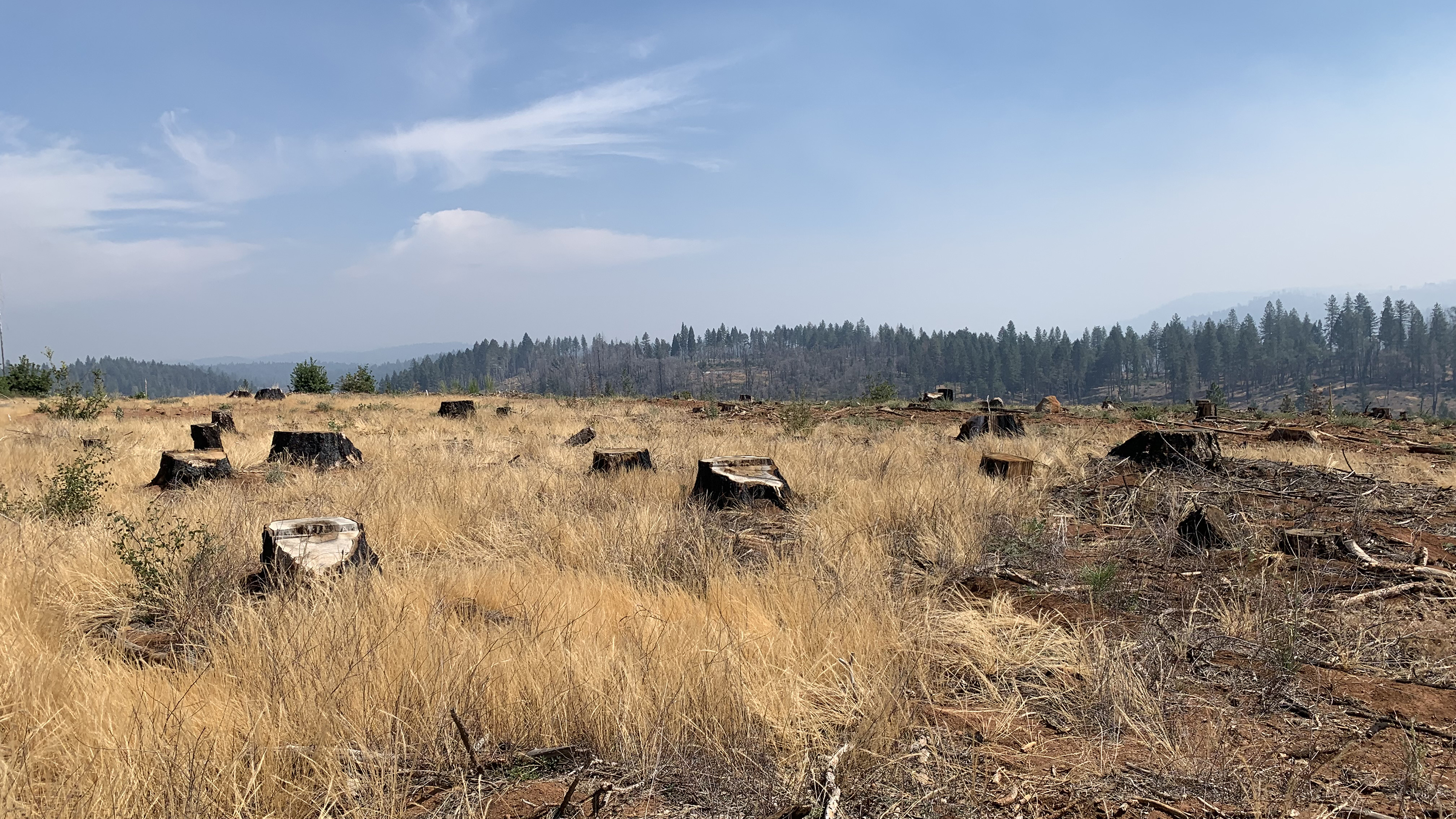 Stumps from recently logged trees in the footprint of the deadly Camp Fire. Some 40,000 trees have now been removed around Paradise. Photo by Kirk Siegler - NPR

By the heat of the afternoon, smoke from the largest wildfire burning in the U.S., the Dixie Fire, drifts into Paradise, Calif.

"Quite literally, it's hanging over your head," says Dan Efseaff, director of the Paradise Recreation and District.

For many locals, seeing and smelling the smoke is a constant if ominous reminder of the 2018 Camp Fire, which killed 85 people and destroyed some 19,000 structures here. The Dixie Fire ignited in nearly the same place.

"We had some days, [with] the sun blocked out, it was dark as night," Efseaff says, as he steers his SUV off of a highway lined on both sides by stumps from logged, charred pine trees. It's then a right turn down a narrow, steep winding dirt road leading to the rim of the canyon where the flames entered Paradise nearly three years ago.

Fire trucks can't get in to protect homes in places like this because it's too dangerous. And while the burnt homes in this leveled neighborhood probably wouldn't have gotten permits in modern times, they're no anomaly in the libertarian rural West. There is a legacy of loose zoning, and some people have to live in places like this because it's cheaper.

"This is not something a fire engine would even entertain going down," he says.

But that's precisely why Efseaff has his eye on properties like these. It's part of a new, ambitious town effort to identify the most high risk properties in the burn area and, if there are willing sellers, buy them and turn them into fire resistant green spaces.

"There have been so many instances of these fires, people know that we have to do something different," he says.

The idea is to connect the burnt out lots to the town's existing park land. That's good for adding more recreation but it could also work as a fuel break. Efseaff's department could strictly manage forests like this with the hopes that the next wildfire might slow down here and give firefighters a chance.

"Every single one of these properties we're looking at from the standpoint of, what can we do to limit the spread of fire, is this a staging area," Efseaff says. "I think it's going to make the community safer."

What will it cost?

This is not eminent domain. The parks program is voluntary. So far they have acquired about 300 acres of new land, with about 500 more acres in the pipeline, mostly paid for with non profit grant money and donations. But Efseaff estimates they may need $20 million or more to have a serious impact from a wildfire prevention standpoint.

That sounds like a lot. But consider that the 2018 Camp Fire did about $16 billion in damage, the single most expensive disaster in the world that year. And these days, the U.S. government is spending upwards of $2 billion on fire suppression, with the primary aim of keeping flames away from homes and whole communities.

Efseaff says in Paradise there's a new mindset that the town has to be as climate and wildfire resilient as possible.

"We're going to have to learn how to live with it in a better way and not just kind of build and hope for the best, which has been kind of the approach in the past," he says.

The federal government has been buying out people who live in high risk flood zones for almost three decades. And as the West cooks in extreme drought, there's interest in replicating this in certain high risk fire zones. A change in federal law recently devoted funding to study the feasibility of this in places like the Sierra Nevada, and Paradise is eager for federal support.

Michael Wara, a climate resiliency expert at Stanford, says what's going on in Paradise could be a model for many other forested, flammable communities.
But he's not sure it will work as well in places that haven't already burned.

"What's more challenging is getting people in existing homes to be willing to leave their homes and their communities so that those homes can be torn down to create this kind of space," he says.

Wara believes that will be an even tougher sell in California, where a lot of people moved to towns like Paradise because they can't afford to live anywhere else.

"The housing crisis in California really complicates any response to the wildfire crisis," he says.

Why 'hardening' homes may be more cost effective

So on a grand scale, experts interviewed for this story say public money may be better spent toward "hardening" existing homes, bringing them up to fire safe building codes, and keeping brush and shrubbery around them cleared out.

Of course, every option is expensive. According to the western think tank Headwaters Economics, some 40 million westerners are now living in the potential path of wildfires.

But then again last year alone, remember that the U.S. government spent $2.2 billion on suppression, and CalFire, hundreds of millions more. The numbers have risen steadily since 1985, according to data from the National Interagency Fire Center in Idaho.

In Paradise, there's a sense of urgency behind all of the reforms because the pace of rebuilding has even surprised town leaders.

Jim Broshears, the town's emergency management coordinator and a longtime wildland fire chief in the Sierra, stands on a burnt out lot along the town's main artery, called the Skyway. On a recent morning it was humming with construction trucks and other traffic.

Broshears's home was one of a few spared in 2018, something he says was at least partly to do with its fire resistant materials and him clearing out all the brush and creating "defensible space." He says another huge catastrophic wildfire like the once unimaginable Camp Fire could happen again.

"We have to rethink what's possible," Broshears says.

For Broshears, that means any and all mitigation strategies, from clearing brush out of vacant lots like the one he's standing on, to putting more green park land in strategic places to work as buffer zones. Before the Camp Fire, this town was built out into a dense, overgrown forest, where wildfires had largely been suppressed for nearly a century.

"You go from a natural stocking level of 30 trees an acre to 150 trees an acre [and] the health of the forest is compromised," Broshears says. "So the new forest in Paradise, you won't see that again."

They've removed almost 40,000 trees here. Depending on who you ask, town is an eerie skeleton of its former self, or it's a blank slate, a fresh start.

Selling out was 'the right move' for one family

When Helene and Paul Baker go back to property the family owned in a gulch along a creek they hardly even recognize it.

"You wouldn't know it but there's a nice creek there at the bottom, all this was cleared out," the couple said during a recent visit.

They lost a family home in the Camp Fire that Helene's parents had built long ago on these three acres. When they heard the parks department was interested, it was an easy decision to sell. This land will open up public access to an 18 acre parks property up on an adjacent hill.

"We were happy with the idea that my folks' old property could be turned into something beautiful rather than just somebody building another house," Helene says.

The Bakers were among the first sellers to take part in the program. Town officials are hoping more might follow them once more PG&E settlement money starts coming in for fire survivors, and if or when the federal government gets serious about funding prevention work like this.

END_OF_DOCUMENT_TOKEN_TO_BE_REPLACED
KCRW's Good Old Fashioned Pledge Drive:  Pledging just got delicious. Give TODAY for 3x your chances of winning up to $1,000 in free food from Postmates!