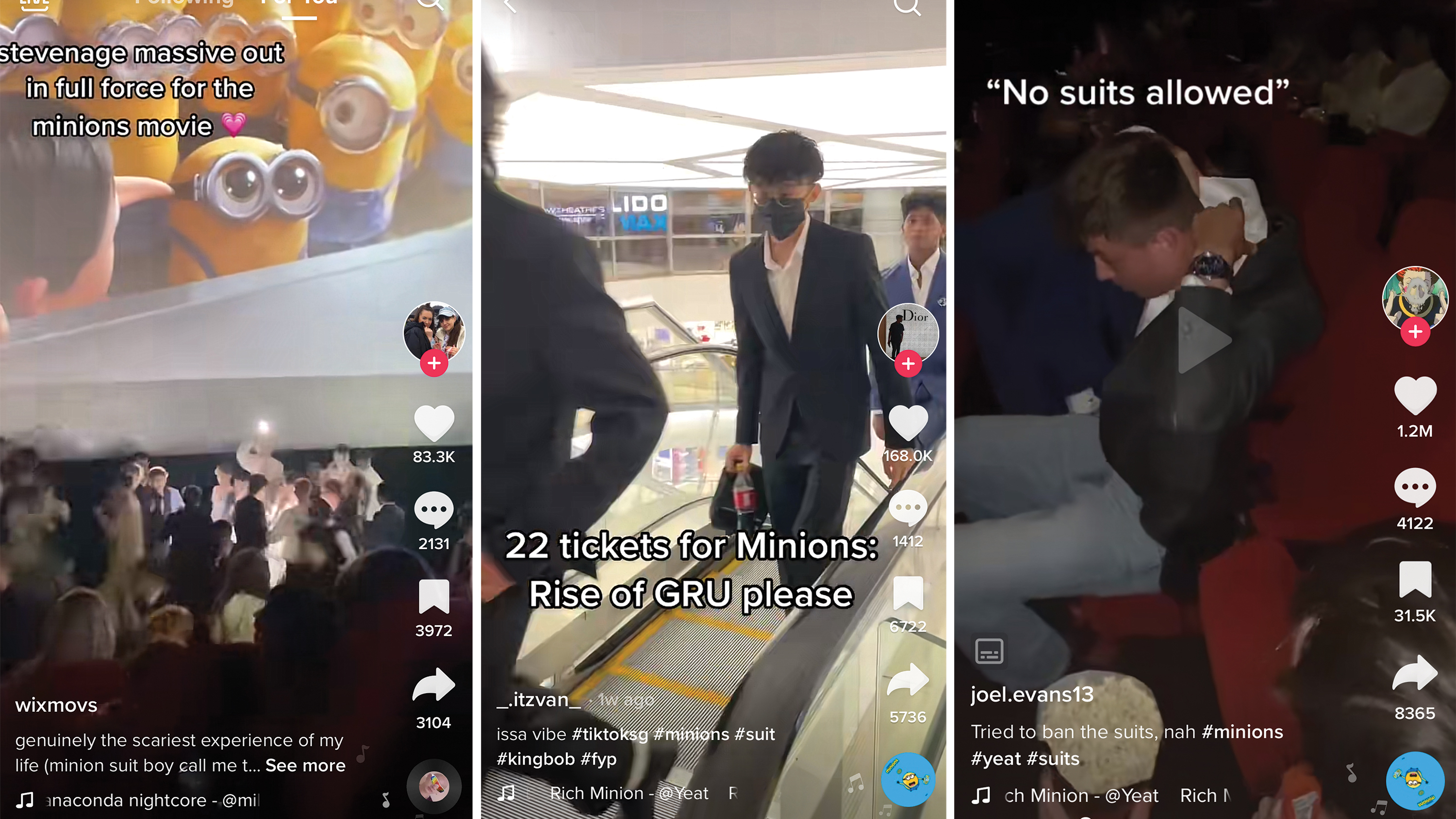 There are dozens of viral videos on TikTok showing teens participating in the #gentleminions trend. Photo by NPR - @wixmovs/TikTok; @_.itzvan_/TikTok; @joel.evans13/TikTok; Screenshots by NPR

Since the dawn of time, the trends and styles of the youth have never failed to perplex their predecessors — and the latest viral trend of the "gentle minions" is no exception.

Following the July 1 release of Minions: The Rise of Gru, hordes of (mostly) teenage boys have documented themselves online as they orchestrate viewing events at movie theaters in their finest 8th grade graduation garb.

The groups show themselves pulling up to their local movie theaters in full suits, dress shirts, and sometimes sunglasses, and carrying themselves with an aura that feels part businessman, part Secret Service, with a dash of self-awareness.

They have dubbed themselves the #gentleminions, gaining a collective 65.4 million views from the hashtag on TikTok alone.

Aside from social media prevalence, the trend may have something to do with Rise of Gru enjoying huge box office success since its release last weekend. The film reportedly grossed an estimated $164 million domestically in its first week.

In one video that received nearly 170,000 likes and more than 1 million views, a large group of more than 20 smartly dressed teenage boys in Singapore ascend in a line on an escalator and then walk out of frame, stone faced and with rigid posture. Some pictured towards the end of the procession clutch small Minion plushies while looking straight ahead. The video is overlaid with text that expresses their simple request: "22 tickets for Minions: Rise of GRU please."

The boys in this particular video say that the now viral clip is more a product of coincidence than planning or intention.

"After we finished the movie, we went out and we were going down the escalator," said Joshua Law, an 18-year-old student. "And then we saw this bunch going up the escalator, and we sort of met halfway."

In fact, many of the boys in this particular video had never met before, but decided a video with this many participants was too good to pass up.

Part of this unity, they admit, is the embarrassment they experienced beforehand in participating in the gag.

"Doing these types of things, you actually get a lot of stares," said Devan Rajen, another 18-year-old student pictured in the video who posted the video from his own TikTok account. "People probably thought we were humiliating ourselves."

Rajen's video showed a tamer iteration of the trend. But other videos have shown the supposed gentleminions being anything but gentle, starting mosh pits in theaters, disrupting the film for others, and generally just being rowdy teens.

Some theaters have taken steps to either ban the wearing of suits from screenings, or issuing strict warnings to any group of teenagers that might disturb other patrons. This choice, however, has also bred innovation, with the most dedicated of the group showing up in disguise and later revealing their suits in the theaters themselves.

"Everything [about this] is highly memetic," said Jennifer Grygiel, an associate professor of communications at Syracuse University, who is an expert in social media and memes. In other words, it's a perfect storm for an opportunity at virality.

Grygiel sees the trend as an endless, accessible feedback loop for the teens watching and those that might want to join in.

"They got exposed to it because they're all seeing TikTok and so they [become] aware of it," Grygiel said. "I think it leads to that type of participation. You know, sometimes social media ends up functioning like a big water cooler."

"Their algorithms kind of sync up with their peer groups, getting it promoted through a moment like you would see on Twitter or like a trend."

Grygiel added that the spreading of a message or a trend wasn't a new concept. But the way it is now communicated may be.

"TikTok seems to be kind of how they figure out what the happenings are, right? So maybe that would have been a teen magazine or, you know, some type of teen show on TV."

Grygiel said once the trend was popularized, the participatory nature of social media encouraged others to join in. In this case, wearing fancy clothes and showing up to a theater with your friends isn't particularly hard for the average teen.

And in a world where influencing has become a preferred dream career choice for young people, the opportunity to have your moment of fame can explain why so many are compelled to join in, even if they don't want to see the movie, or care for those banana-loving pill-shaped workers.

"I didn't like the movie," admitted Law, who was in the viral #gentleminions video. "I thought it was mediocre at best. But I liked the atmosphere."

And when pressed on why they chose to join in on this trend, to go through the trouble of spending their own money to go see a movie targeted for kids, Law gave perhaps the most honest, accurate answer as to why teenagers have always done the things that teenagers do:

"I think we're just bored. There's not really anything else better to do."

Latino legends helped pave the way in Hollywood, but the road is still rocky NPR Sep 15