CHART: Where Disease-Carrying Mosquitoes Will Go In The Future 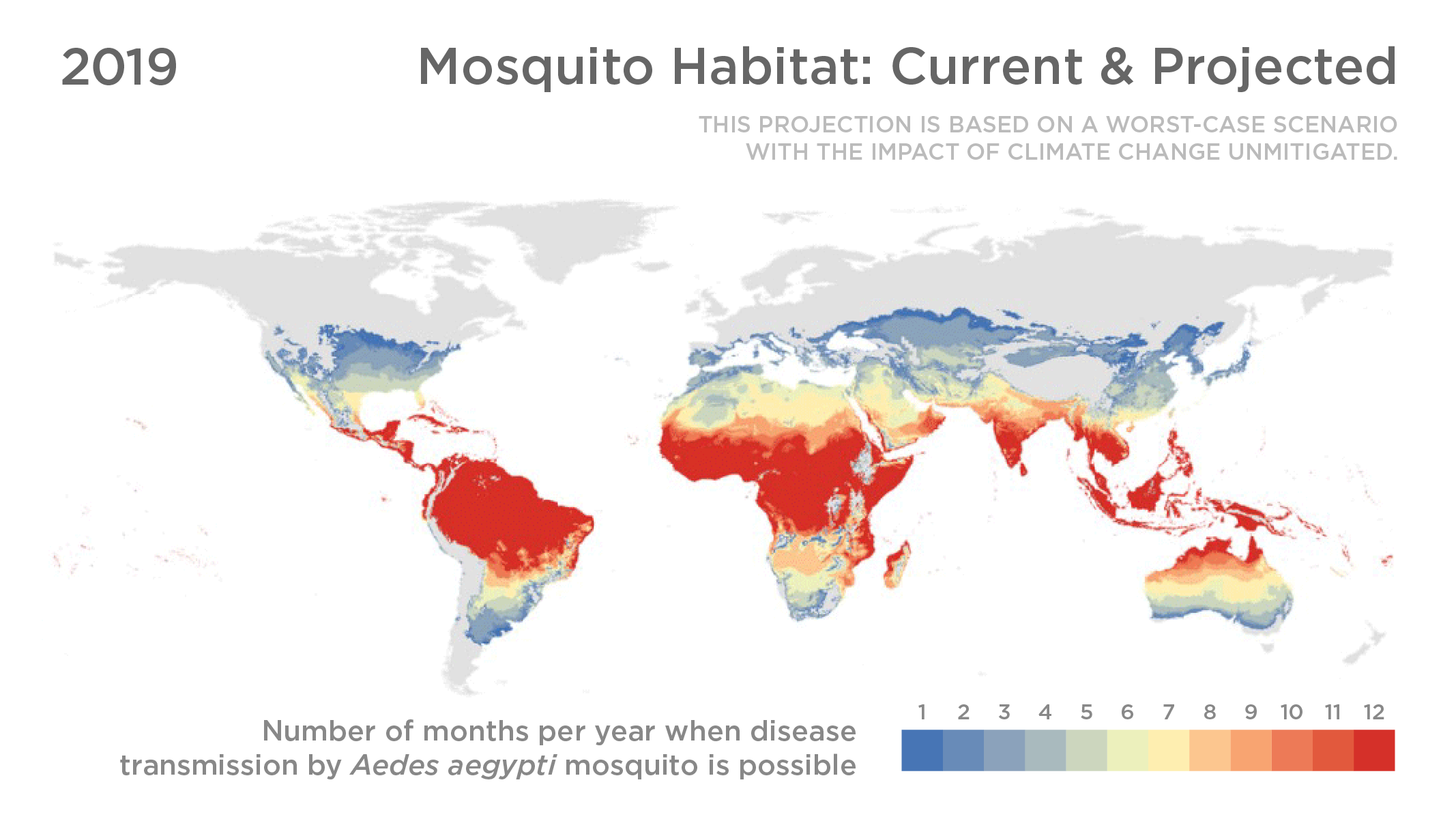 Disease-bearing mosquitoes are on the move.

Scientists have been pretty sure of that for decades. As temperatures rise in certain parts of the world, warmth-seeking mosquitoes will invade, making themselves at home in previously inhospitable patches of the globe.

Now researchers are trying to figure out exactly how far north these mosquitoes will migrate.

Based on estimates of future temperatures across the world, the authors of a study published this week in PLOS Neglected Tropical Diseases mapped where the mosquitoes that transmit diseases like dengue and Zika might travel if climate change continues unchecked.

Based on their worst-case scenario projections, the researchers believe as many as a billion people could be newly exposed to these illnesses within the century.

"We're really worried about major urban centers in places like Europe, the United States and China especially," says Colin Carlson, co-lead author of the study and postdoctoral fellow at Georgetown University, who specializes in ecological modeling.

The models produced by the team of researchers focus on two types of mosquitoes: Aedes aegypti and Aedes albopictus. The researchers used four different climate change scenarios to predict where temperatures will be suitable for mosquitoes to thrive in the years 2050 and 2080. (It's important to note that just because the temperatures are OK for the mosquitoes, doesn't mean diseases will spread.)

The researchers found Aedes aegypti and Aedes albopictus will likely creep north over the next half century, beginning to breed in parts of North America, Europe and East Asia where it had previously been too cold.

Aedes albopictus, also known as the Asian tiger mosquito — which Carlson says is better adapted to the cold — will lead the charge, potentially carrying diseases like yellow fever, dengue and chikungunya.

But the Asian tiger mosquito won't fare so well back in the tropics, where the researchers predict the heat might become too extreme for the bug to transmit any diseases. In the worst-case climate predictions for 2080, central Africa could be free of the species year-round.

Earlier this month, another group of researchers published their prediction of where these two species might move in the next 30 years, taking into account climate change, urbanization and migration patterns. Like Carlson's team, they found the mosquitoes moving north, thriving as far as Chicago and Shanghai by 2050, but dying out in parts of the Southern U.S. that could become too dry.

Moritz Kraemer, a co-author of the study and research fellow at the University of Oxford, says that despite the differences in how the two groups modeled mosquito movement, the takeaway is the same: "We will see an expansion of the mosquito."

But he believes that the projections in the newest PLOS study might not be as ominous as they look. The new study shows that the mosquitoes up north are only able to transfer diseases for a month or two before it gets too cold to breed.

"If I had Aedes aegypti and put it in Alaska in the summer months, it may be able to survive a week or two, but then it dies," Kraemer says. "I would need to bring it back next year in the same months for it [to thrive] again."

Kraemer is more concerned about what the new study predicts might happen in urban areas of China, the United States and Europe, where the mosquitoes could become year-round threats to people who haven't had time to build up immunity.

"Once the mosquito arrives in a place where it hasn't been before, it basically puts a lot of people at risk who have never been exposed to any of the diseases it transmits," he says.

In this way, mosquito-borne diseases work a lot like the measles, Carlson says.

"If you have a population that has no vaccination, no protection and one person comes in with measles, you get a huge explosive outbreak," he says. "Mosquito-borne disease works the same way."

And, he says, while "there's no guarantee that any introduction leads to an explosive outbreak," climate change makes it a whole lot more likely.