Trump Administration Considering Changes That Would Redefine The Poverty Line 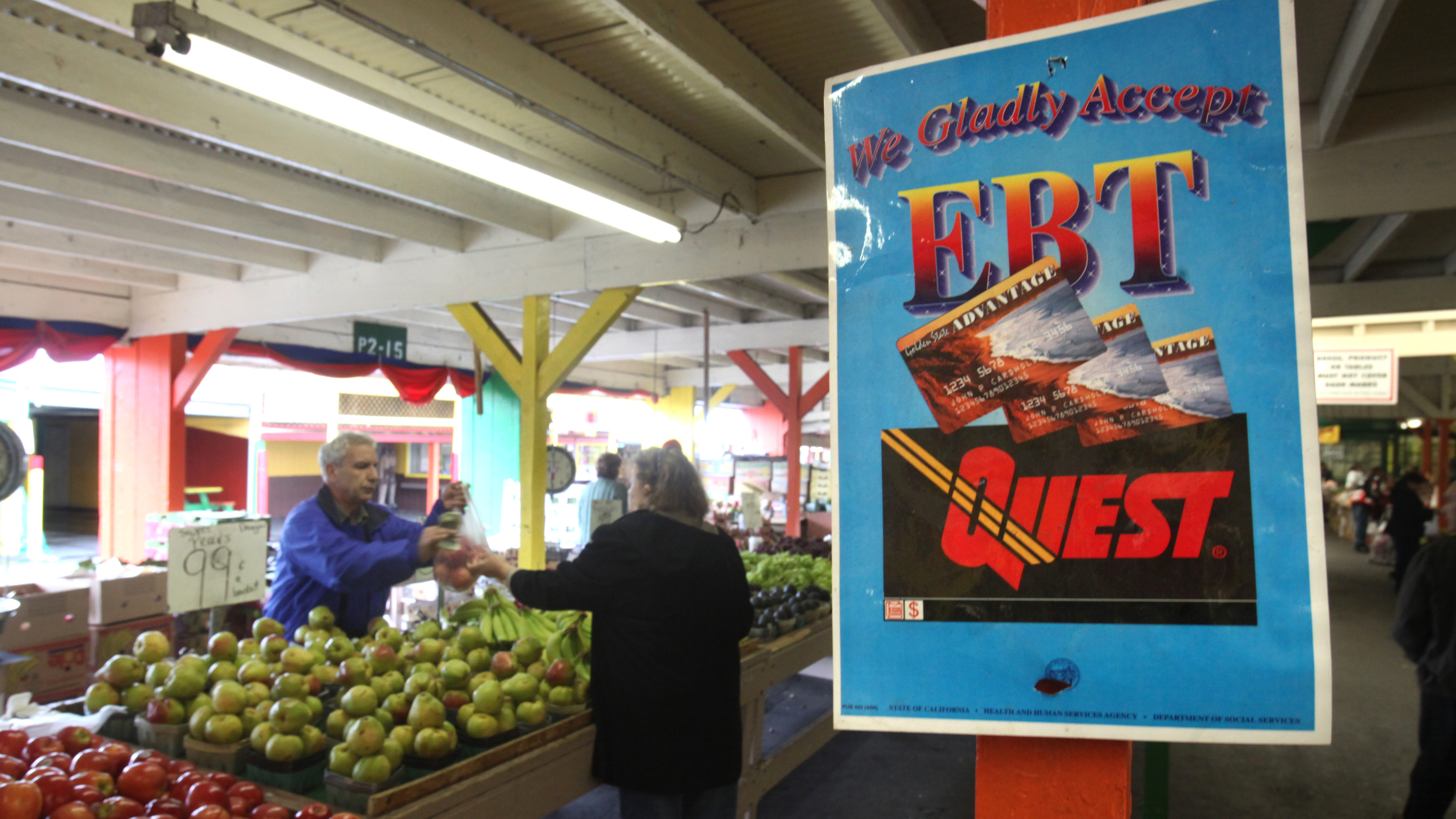 A sign announces the acceptance of electronic benefit transfer cards at a farmers market in California. Anti-poverty groups fear that many low-income people might be pushed off programs such as food stamps under a possible change to how the government measures poverty. Photo by Rich Pedroncelli - AP

The Trump administration is considering changing the way the government measures poverty, which has anti-poverty groups worried that many low-income individuals will be pushed off assistance programs such as food stamps, Medicaid and Head Start.

The possible change would involve adjusting the poverty line annually using a different inflation measure, one that would result in a slower increase over time.

Arloc Sherman of the left-leaning Center on Budget and Policy Priorities says this change would mean that millions of people eventually could see their benefits either reduced or eliminated because they wouldn't be considered as poor as they were under the old measure.

"They have a goal, and the goal is to cut people of low or moderate income off of government assistance," Sherman said of the administration. He noted that the idea is being floated at the same time that the White House is proposing work requirements and steep budget cuts for safety net programs.

The administration raised the possibility of changing the poverty calculation in a notice published this week in the Federal Register. It seeks public comment on which measure of inflation should be used but does not state a preference.

The current poverty line for a family of four is about $26,000. Each year, the government adjusts the line for inflation based on the consumer price index. Among the options that the administration is considering is whether to use a version called the "chained CPI," which is lower than the rate currently used. The chained CPI assumes that as the prices of goods go up, individuals substitute less expensive items, thereby reducing their overall expenses.

Some economists argue that this is a more accurate way to measure inflation, and both Barack Obama's and George W. Bush's administrations tried, without success, to introduce the use of the chained CPI in federal programs.

"It went nowhere," recalls Douglas Holtz-Eakin, who was chief economist in the Council of Economic Advisers under Bush. Holtz-Eakin says he understands why the proposal would be controversial among anti-poverty advocates. But if they're worried about cuts in government aid, he says, it would be better to change the programs themselves rather than continue using an inaccurate measure of inflation.

"If we're going to have federal programs indexed to inflation, and we have many — we have the tax code, we have Social Security, we have the poverty index, all sorts of things — then it's important to measure inflation as correctly as possible," he says. Holtz-Eakin, who is president of the right-leaning American Action Forum, notes that the 2017 tax law requires that the chained CPI now be used for adjusting income tax brackets.

Still, he thinks there's less than a 50-50 chance that the change will happen because of the fierce opposition expected from those who believe they would be harmed.

Anti-poverty groups are already gearing up to block any such change, portraying it as part of a broader administration attack on the safety net. They are also fighting efforts to impose stricter work requirements on food stamp recipients and efforts to restrict housing and other aid for immigrants.

"This is a cynical attempt to squeeze working-class people. Their incomes will STILL be too low to make ends meet, but Trump's decree would make it harder for them to qualify for help," tweeted Melissa Boteach, of the National Women's Law Center.

She and others say the existing poverty measure is already inadequate for the needs of low-income families because it's based on a 1960s formula that assumes the average family spends about one-third of its income on food, something that is no longer the case.

The government recently began producing a supplemental poverty measure that most experts think is more accurate. It takes into account such things as medical and child care expenses, geographic differences in the cost of housing and the value of benefits such as food stamps and tax credits. But that measure is not used when determining eligibility for government programs.

Sherman of the Center on Budget and Policy Priorities says the administration should look at the overall impact of the current poverty measure rather than cherry-pick one part that would lead to reducing benefits for low-income families.

The administration is accepting comments on the poverty calculation until June 21.