Lawmakers Respond To Trump's Racist Comments: We Are Here To Stay 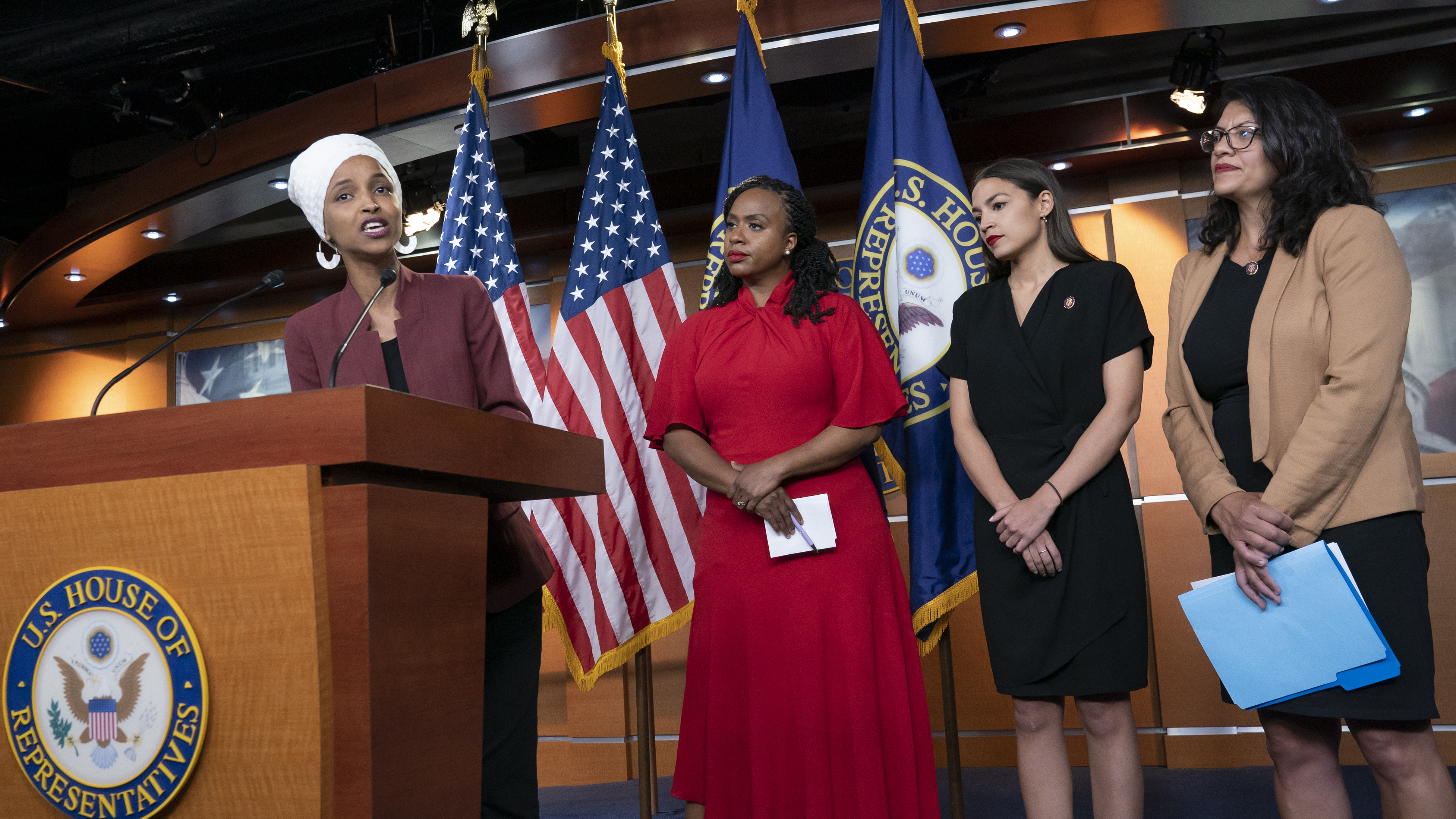 Democratic Reps. Ilhan Omar of Minnesota (from left), Ayanna Pressley of Massachusetts, Alexandria Ocasio-Cortez of New York and Rashida Tlaib of Michigan respond to racist remarks directed at them by President Trump at a news conference on Monday. Photo by J. Scott Applewhite - AP

A group of four women lawmakers responded to attacks by President Trump with a news conference of their own on Monday evening.

Earlier in the day, Trump said the members of Congress are "free to leave" the country if they are unhappy with the U.S. and accused them of hating America.

Trump's remarks, made at an impromptu news conference in front of the White House, follow racist tweets that he sent on Sunday directed at Democratic freshmen Reps. Alexandria Ocasio-Cortez of New York, Ilhan Omar of Minnesota, Rashida Tlaib of Michigan and Ayanna Pressley of Massachusetts — all women of color. Trump tweeted that they should "go back" to the "places from which they came." (Omar was born in Somalia; the other three were all born in the United States.)

Democrats were quick to denounce the tweets on Sunday, but Republicans were largely silent until Monday. Criticism grew as the president doubled down.

Asked Monday if he was concerned that "people saw the tweet as racist and that white nationalist groups are finding common cause with you on that point," Trump replied, "It doesn't concern me because many people agree with me."

Ocasio-Cortez said at the lawmakers' news conference, "We don't leave the things that we love, and when we love this country, what that means is that we propose the solutions to fix it." She added that Trump "does not know how to defend his policies, so what he does is attack us personally, and that is what this is all about."

The lawmakers pointed to the administration's immigration policies in particular. Ocasio-Cortez was among those who recently visited a detention facility on the U.S.-Mexico border and testified about the harsh conditions she witnessed.

Pointing to past comments Trump has made about women, African American athletes and neo-Nazi protesters in Charlottesville, Va., Omar said Trump was advocating "the agenda of white nationalists."

"It's time for us to impeach this president," she said. Tlaib echoed her call for impeachment.

Earlier in the day, Trump said in a tweet that the lawmakers should apologize "to our Country, the people of Israel and even to the Office of the President."

Trump said "the Radical Left Congresswomen" should apologize for "the foul language they have used, and the terrible things they have said. So many people are angry at them & their horrible & disgusting actions!"

Omar, whom Trump called out by name on Monday, tweeted, "They are working to silence the voices of the people who see themselves represented in me. I will stay in the ring, fighting for what is right and will never back down in the face of these attacks."

House Speaker Nancy Pelosi, who has been at odds with the four members of her caucus, came to their defense Sunday. She tweeted that when Trump "tells four American Congresswomen to go back to their countries, he reaffirms his plan to 'Make America Great Again' has always been about making America white again." Pelosi added, "Our diversity is our strength and our unity is our power."

In his brief comments to reporters at the White House, Trump denied that his tweets were racist. "Not at all," he said. Instead, Trump claimed it was Pelosi's remarks that were racist.

Pelosi announced that the House will take up a resolution "condemning the President's xenophobic tweets" — a resolution that she said will be sponsored by Democratic lawmakers who were born overseas.

Republicans stayed mostly quiet about Trump's tweets on Sunday, but several weighed in on Monday, critical of Trump's language.

In an interview on Fox & Friends on Monday morning, Sen. Lindsey Graham, R-S.C., said Trump should "aim higher. ... They are American citizens. They won an election. Take on their policies." But Graham also said, "We all know that [Ocasio-Cortez] and this crowd are a bunch of communists. They hate Israel. They hate our own country."

Rep. Paul Mitchell, R-Mich., tweeted at Trump, "we must be better than comments like these. I share the political frustrations with some members of the other party, but these comments are beneath leaders."

Another Michigan GOP lawmaker, Rep. Fred Upton, tweeted that he is "appalled by the President's tweets," adding, "There's no excuse." Upton also condemned what he labeled "Inflammatory rhetoric from both sides of the aisle that is used to divide us."

"President Trump was wrong to suggest that four left-wing congresswomen should go back to where they came from. Three of the four were born in America and the citizenship of all four is as valid as mine," he said. "I couldn't disagree more with these congresswomen's views on immigration, socialism, national security, and virtually every policy issue. But they are entitled to their opinions, however misguided they may be. We should defeat their ideas on the merits, not on the basis of their ancestry."

One of the strongest reactions among Republicans came from Rep. Will Hurd of Texas, who is the only African American Republican in the House. Hurd told CNN that the president's tweets were "racist and xenophobic" and said it was "behavior that's unbecoming of the leader of the free world. He should be talking about things that unite us, not divide us."

Alaska Sen. Lisa Murkowski tweeted, "There is no excuse for the president's spiteful comments –they were absolutely unacceptable and this needs to stop."

And Sen. Tim Scott, R-S.C., the Senate's only African American Republican, charged that the Democratic Party was "embroiled in racial controversy," while also condemning the president's "racially offensive language."

Trump, who in a separate tweet on Saturday claimed 94% support from Republican Party members, seemed to welcome the storm he set off, saying in another tweet that it was "sad" to see Democrats "sticking up for people who speak so badly of our Country and who, in addition, hate Israel with a true and unbridled passion."

Omar has faced controversy for remarks critical of Israel earlier this year that many deemed anti-Semitic. The House voted in March to condemn "anti-Semitism, Islamophobia, racism and other forms of bigotry," without explicitly naming Omar. While the Anti-Defamation League was among the groups to denounce Omar's comments, on Monday the anti-hate speech organization turned its criticism on Trump.

"While ADL has publicly disagreed with these congresswomen on some issues, the president is echoing the racist talking points of white nationalists and cynically using the Jewish people and the state of Israel as a shield to double down on his remarks. Politicizing the widespread, bipartisan support for Israel and throwing around accusations of anti-Semitism is damaging to the security of Israel and the Jewish community. He should lead by example, stop politicizing these issues and stop smearing members of Congress."

An earlier version of this story mistakenly said President Trump claimed 94% support from Republican Party members in a Sunday tweet. The tweet was actually on Saturday.