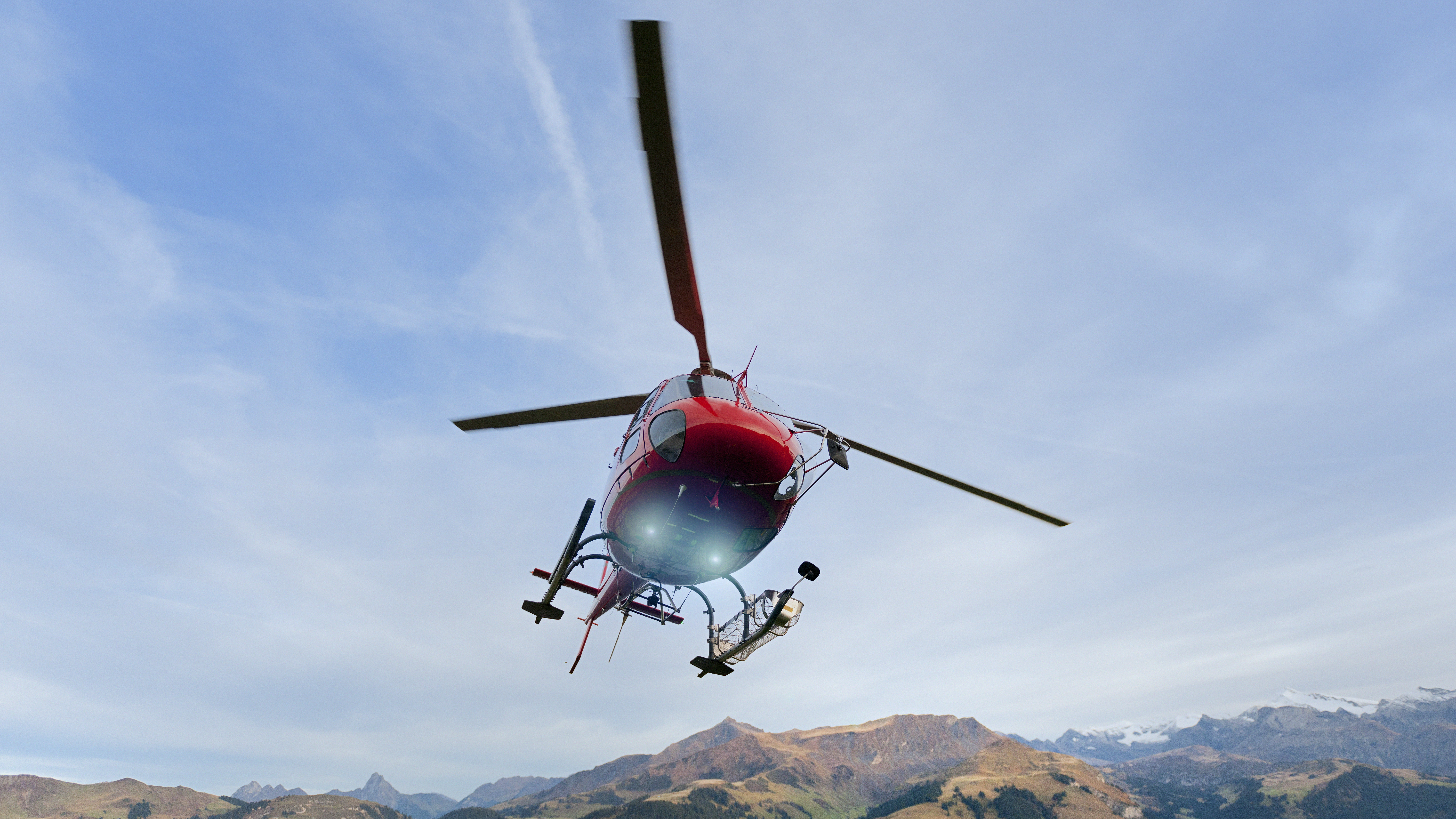 In rugged, rural areas, patients often have little choice about how they'll get to the hospital in an emergency. "The presence of private equity in the air ambulance industry indicates that investors see profit opportunities," a 2017 report from the federal Government Accountability Office notes. Photo by pidjoe - Getty Images

Wyoming, which is among the reddest of Republican states and a bastion of free enterprise, thinks it may have found a way to end crippling air ambulance bills that sometimes top $100,000 per flight.

The state's unexpected solution: Undercut the free market, by using Medicaid to treat air ambulances like a public utility.

Costs for such emergency transports have been soaring, with some patients facing massive, unexpected bills as the free-flying air ambulance industry expands with cash from profit-seeking private-equity investors. The issue has come to a head in Wyoming, where rugged terrain and long distances between hospitals forces reliance on these ambulance flights.

Other states have tried to rein in the industry, but have continually run up against the Airline Deregulation Act, a federal law that preempts states from regulating any part of the air industry.

So, Wyoming officials are instead seeking federal approval to funnel all medical air transportation in the state through Medicaid, a joint federal-state program for residents with lower incomes. The state officials plan to submit their proposal in late September to Medicaid's parent agency, the Centers for Medicare & Medicaid Services; the plan will still face significant hurdles there.

If successful, however, the Wyoming approach could be a model for the nation, protecting patients in need of a lifesaving service from being devastated by a life-altering debt.

"The free market has sort of broken down. It's not really working effectively to balance cost against access," says Franz Fuchs, a policy analyst for the Wyoming Department of Health. "Patients and consumers really can't make informed decisions and vote with their dollars on price and quality."

The air ambulance industry has grown steadily in the U.S., from about 1,100 aircraft in 2007 to more than 1,400 in 2018. During that same time, the fleet in Wyoming has grown from three aircraft to 14. State officials say an oversupply of helicopters and planes is driving up prices, because air bases have high fixed overhead costs. Fuchs says companies must pay for aircraft, staffing and technology, such as night-vision goggles and flight simulators — incurring 85% of their total costs before they fly a single patient.

But with the supply of aircraft outpacing demand, each air ambulance is flying fewer patients. Nationally, air ambulances have gone from an average of 688 flights per aircraft in 1990, as reported by Bloomberg, to 352 in 2016. So, companies have raised their prices to cover their fixed costs and to seek healthy returns for their investors.

A 2017 report from the federal Government Accountability Office notes that the three largest air ambulance operators are for-profit companies with a growing private equity investment. "The presence of private equity in the air ambulance industry indicates that investors see profit opportunities in the industry," the report says.

As that cost-shifting increases, insurers and air ambulance companies haven't been able to agree on in-network rates. So the services are left out of insurance plans.

When a consumer needs a flight, it's billed as an out-of-network service. Air ambulance companies then can charge whatever they want. If the insurer pays part of the bill, the air ambulance company can still bill the patient for the rest — a practice known as balance billing.

"We have a system that allows providers to set their own prices," says Dr. Kevin Schulman, a Stanford University professor of medicine and economics. "In a world where there are no price constraints, there's no reason to limit capacity, and that's exactly what we're seeing."

Nationally, the average helicopter bill has now reached $40,000, according to a 2019 GAO report — more than twice what it was in 2010. State officials say Wyoming patients have received bills as high as $130,000.

Because consumers don't know what an air ambulance flight will cost them — and because their medical condition may be an emergency — they can't choose to go with a lower-cost alternative, either another air ambulance company or a ground ambulance.

A different way of doing things

Wyoming officials propose to reduce the number of air ambulance bases and strategically locate them, to even out access. The state would then seek bids from air ambulance companies to operate those bases at a fixed yearly cost. It's a regulated monopoly approach, similar to the way public utilities are run.

"You don't have local privatized fire departments springing up and putting out fires and billing people," Fuchs says. "The town plans for a few fire stations, decides where they should be strategically, and they pay for that fire coverage capacity."

Medicaid would cover all the air ambulance flights in Wyoming — and then recoup those costs by billing patients' insurance plans for those flights. A patient's out-of-pocket costs would be capped at 2% of the person's income or $5,000, whichever is less, so patients could easily figure out how much they would owe. Officials estimate they could lower private insurers' average cost per flight from $36,000 to $22,000 under their plan.

"The free market has sort of broken down. It's not really working effectively to balance cost against access." Franz Fuchs, Wyoming Department of Health.

State Rep. Eric Barlow, who co-sponsored the legislation, recognizes the irony of a GOP-controlled, right-leaning legislature taking steps to circumvent market forces. But the Republican said that sometimes government needs to make sure its citizens are not being abused.

"There were certainly some folks with reservations," he says. "But folks were also hearing from their constituents about these incredible bills."

Air ambulance companies have opposed the plan. They say the surprise-billing problem could be eliminated if Medicare and Medicaid covered the cost of flights and the companies wouldn't have to shift costs to other patients. They question whether the state truly has an oversupply of aircraft and warn that reducing the number of bases would increase response times and cut access to the lifesaving service.

Richard Mincer, an attorney who represents the for-profit Air Medical Group Holdings in Wyoming, says that while 4,000 patients are flown by air ambulance each year in the state, it's not clear how many more people have needed flights when no aircraft was available.

"How many of these 4,000 people a year are you willing to tell, 'Sorry, we decided as a legislature you're going to have to take ground ambulance?' " Mincer said during a June hearing on the proposal.

But Wyoming officials say it indeed might be more appropriate for some patients to take ground ambulances. The vast majority of air ambulance flights in the state, they say, are transfers from one hospital to another, rather than on-scene trauma responses. The officials say they've also heard of patients being flown for medical events that aren't an emergency, such as a broken wrist or impending gallbladder surgery.

Air ambulance providers say such decisions are out of their control: They fly when a doctor or a first responder calls.

But air ambulance companies do have ways of drumming up business: They heavily market memberships that cover a patient's out-of-pocket costs, eliminating any disincentive for the patient to fly. Companies also build relationships with doctors and hospitals that can influence the decision to fly a patient; some have been known to deliver pizzas to hospitals by helicopter to introduce themselves.

The industry also has tried to shift blame onto insurance plans, which the transporters say refuse to pay their fair share for air ambulance flights and refuse to negotiate lower rates.

Doug Flanders, director of communications and government affairs for the medical transport company Air Methods, says the Wyoming plan "does nothing to compel Wyoming's health insurers to include emergency air medical services as part of their in-network coverage."

Other critics of the status quo maintain that air ambulance companies don't want to change, because the industry has seen investments from Wall Street hedge funds that rely on the balance-billing business model to maximize profits.

"It's the same people who have bought out all the emergency room practices, who've bought out all the anesthesiology practices," says James Gelfand, senior vice president of health policy for the ERISA Industry Committee, a trade group representing large employers. "They have a business strategy of finding medical providers who have all the leverage, taking them out of network and essentially putting a gun to the patient's head."

The Association of Air Medical Services counters that the industry is not as lucrative as it's made out to be, pointing to the recent bankruptcy of PHI Inc., the nation's third-largest air ambulance provider.

Meanwhile, Blue Cross Blue Shield of Wyoming is supportive of the state's proposal and looks forward to further discussion about the details if approved, according to Wendy Curran, a vice president at the health insurance firm. "We are on record," Curran says, "as supporting any effort at the state level to address the tremendous financial impacts to our [Wyoming] members when air ambulance service is provided by an out-of-network provider."

The Wyoming proposal also has been well received by employers, who like the ability to buy into the program at a fixed cost for their employees, providing a predictable annual cost for air ambulance services.

"It is one of the first times we've ... seen a proposal where the cost of health care might actually go down," says Anne Ladd, CEO of the Wyoming Business Coalition on Health.

The real challenge, Fuchs says, will be convincing federal officials to go along with it.

Kaiser Health News is a nonprofit, editorially independent program of the Kaiser Family Foundation. KHN is not affiliated with Kaiser Permanente.